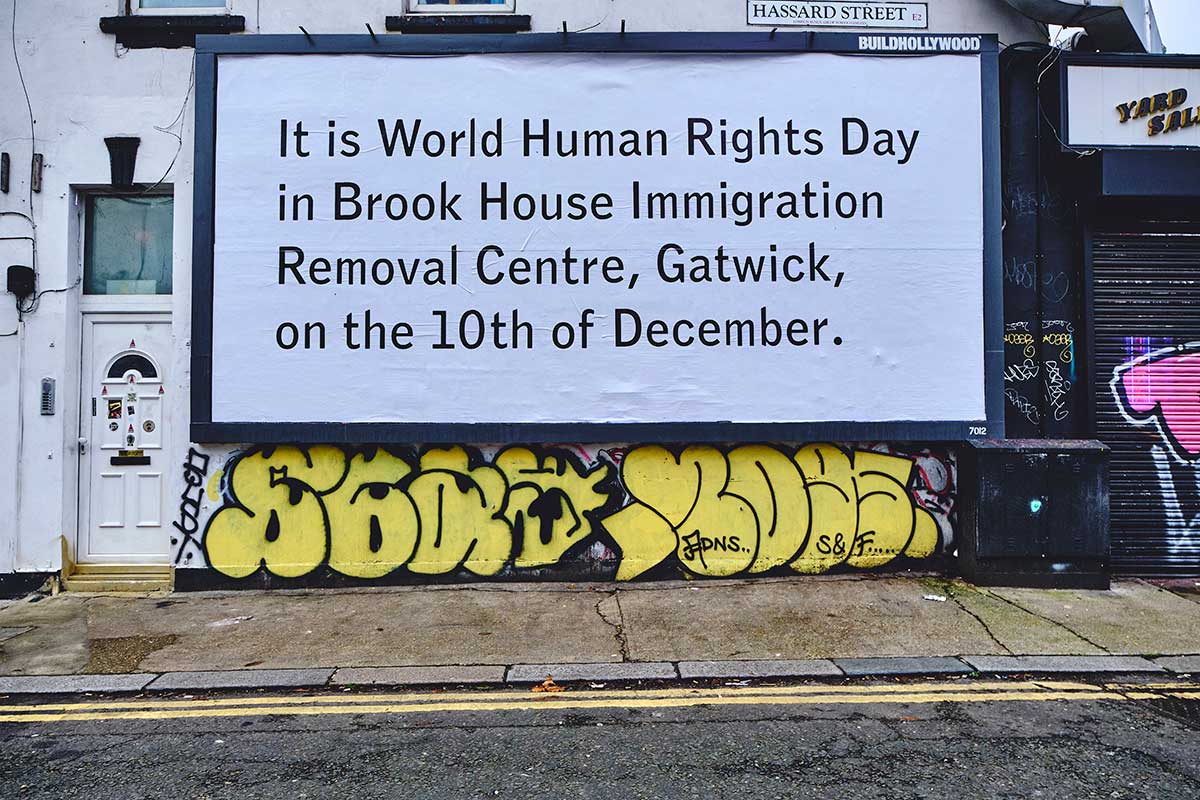 Who staged his first art exhibition – which included reproducing graffiti from the original British Library men’s toilets – in his parents’ house while they were away on holiday?

Who convinced the Williams Fairey Brass Band to transcribe and perform a repertoire of acid house music?

Who persuaded ex-miners and police officers to work with members of an historical re-enactment society to recreate the bloody last stand of British coal production?

Who took the buckled, rusty carcass of a motor vehicle bombed in Baghdad on a road trip from New York City to Los Angeles?

Who marked the Battle of the Somme 2016 centenary by dispatching across the UK thousands of volunteers dressed in authentic WWI uniforms? When approached they didn’t speak but handed out cards with the name and rank of one of the 20,000 soldiers killed on just the first day of fighting.

Who adores bats, represented Britain in the Venice Biennale with images of tax haven Jersey ablaze, and thinks we should be worshiping lobsters and squid not eating them?

The art wizard Jeremy Deller, that’s who. A man who seems to produce more in a month than I’ve managed in a lifetime. When detective Lieutenant Columbo was asked what made the director John Cassavetes so special he said the man had a most fertile mind.

Ditto Deller. He is a ringmaster who delights his audience. And Deller’s audience isn’t just the art crowd but pretty much anyone with a pulse. He loves to both pose and prompt questions, to entertain, to provoke, to explore, to better understand and share a fierce curiosity and compassionate engagement with people and diverse cultures.

There are works that quietly seethe at injustice: the material banners commissioned on which, writ large, are callous texts sent to employees exploited by the gig economy. Others, like his bouncy castle replica of Stonehenge, at first seem a vehicle for sheer physical joy but along with the somersaults is a critique as to what’s considered heritage, what it’s for and who it belongs to.

Last year Deller made Everybody in the Place: An Incomplete History of Britain 1984 – 1992. In this film he talks to a group of young students about the origins and development of rave culture in the context of social and technological change, how the ad hoc parties in abandoned factories in Northern towns across the UK were – like Thatcher’s defeat of the miners – a ‘death ritual’ that marked a transition from an Industrial to a Service economy. The 1980s was a time of desperate uncertainty, a pivotal decade economically, socially and politically. It looks like we’re about to launch into another one. Hold on to your bucket hats.

Some of Deller’s earliest exhibited artworks were the posters he made advertising imagined exhibitions, apocryphal events that perhaps only he wanted to see at the time. He’s gone on to produce works on billboards and further forays in the primal medium of the poster.

In 2017 his ‘Strong and Stable My Arse’ work in response to Theresa May’s election campaign phrase caught the mood of the nation. Just before the first COVID– 19 restrictions Deller’s equally blunt ‘Tax Avoidance Kills’ posters sprung up across London. With design collaborator Fraser Muggeridge during lockdown they produced and sold thousands of ‘Thank God For Immigrants’ posters in aid of refugee support and action tackling food poverty. 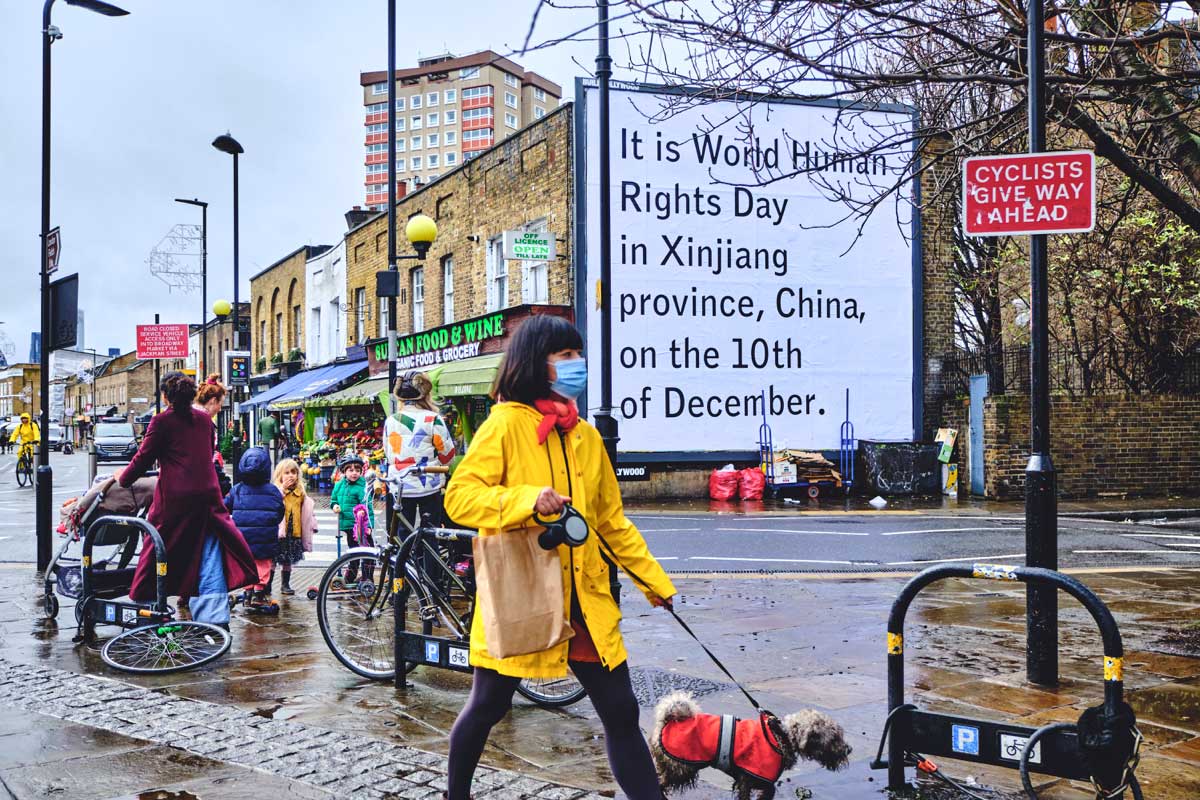 Street display addresses two of Deller’s key criteria in producing work: accessibility and participation. Another quality often evident is plain speaking. Which brings us to the BUILDHOLLYWOOD family’s current Your Space Or Mine collaboration with the artist. To coincide with Human Rights Day on Dec. 10th billboards throughout the country will carry a chilling reminder that all across the world people are being denied their basic human rights.

These stark, dolent works spotlight numerous locations where atrocities persist: the water poisoning in Flint, Michigan, USA; the treatment of refugees at Brook House, Gatwick, UK; the genocide of Muslim minority Rohingya people in Rakhine State, Myanmar; etcetera. The posters don’t go into detail. They simply point to the incongruity between a professed adherence to the universal declaration of human rights and what actually goes on across the world. All 193 member states of the United Nations sign up to the UDHR, and yet… and yet…

So, while 2020 has been a bit of a bummer, and the coming season looks like being more of a damp squib than festive bash, just thank your lucky stars you don’t live in Saudi Arabia, or Nigeria’s Borno State, or Minsk in Belarus… Wait a minute, that’s the point isn’t it? It’s not about geography. It’s about people and conscience and caring. A true Christmas message. And one that’s not just for Christmas. 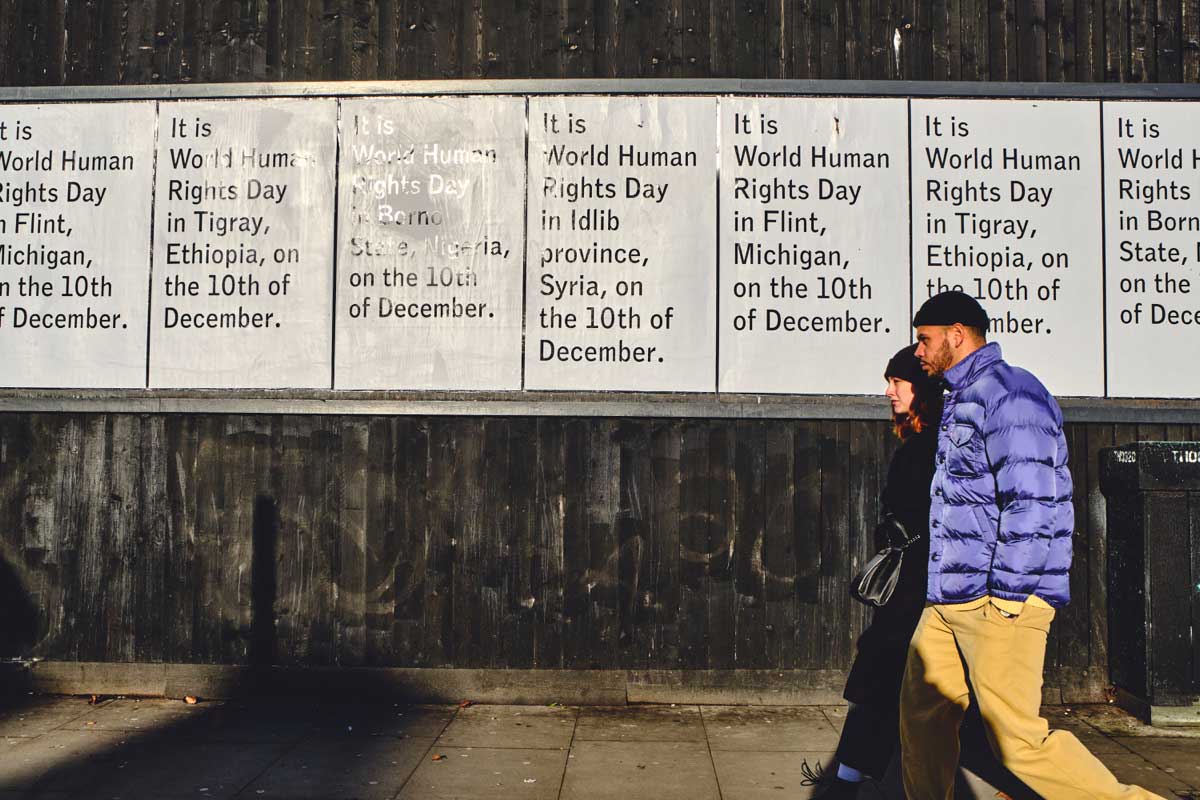 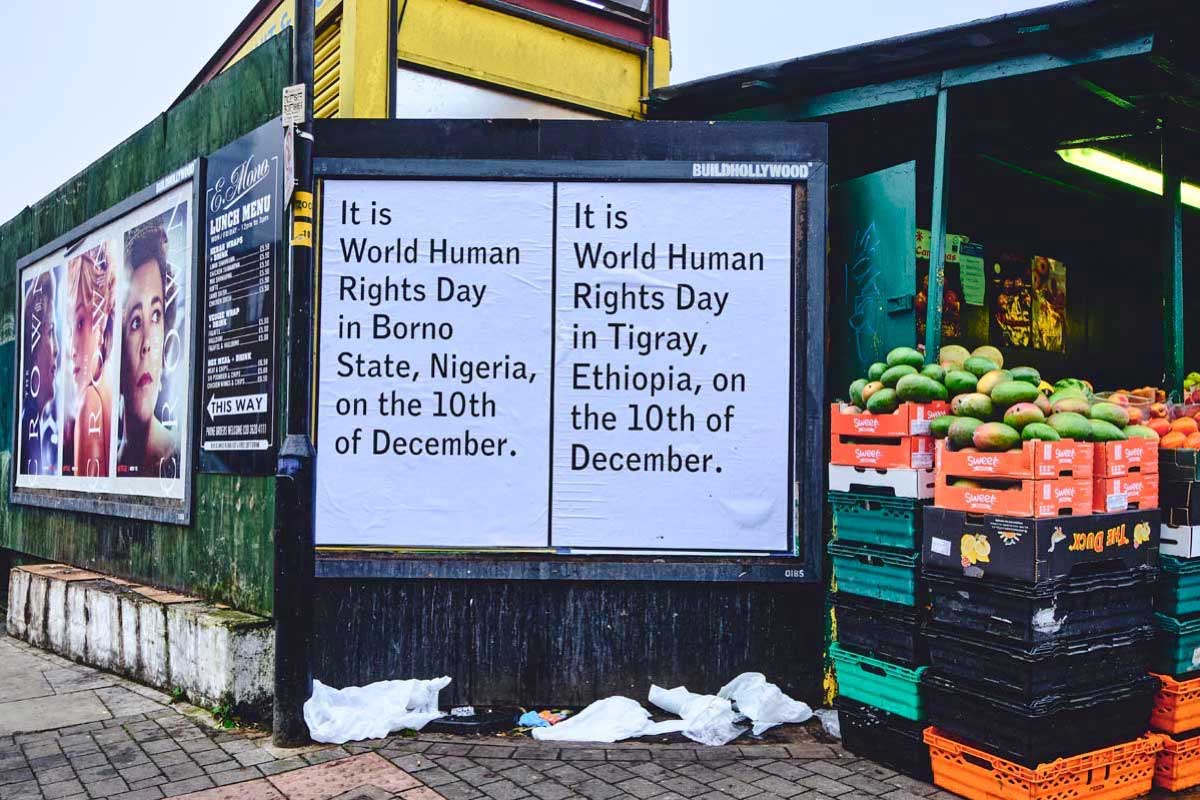 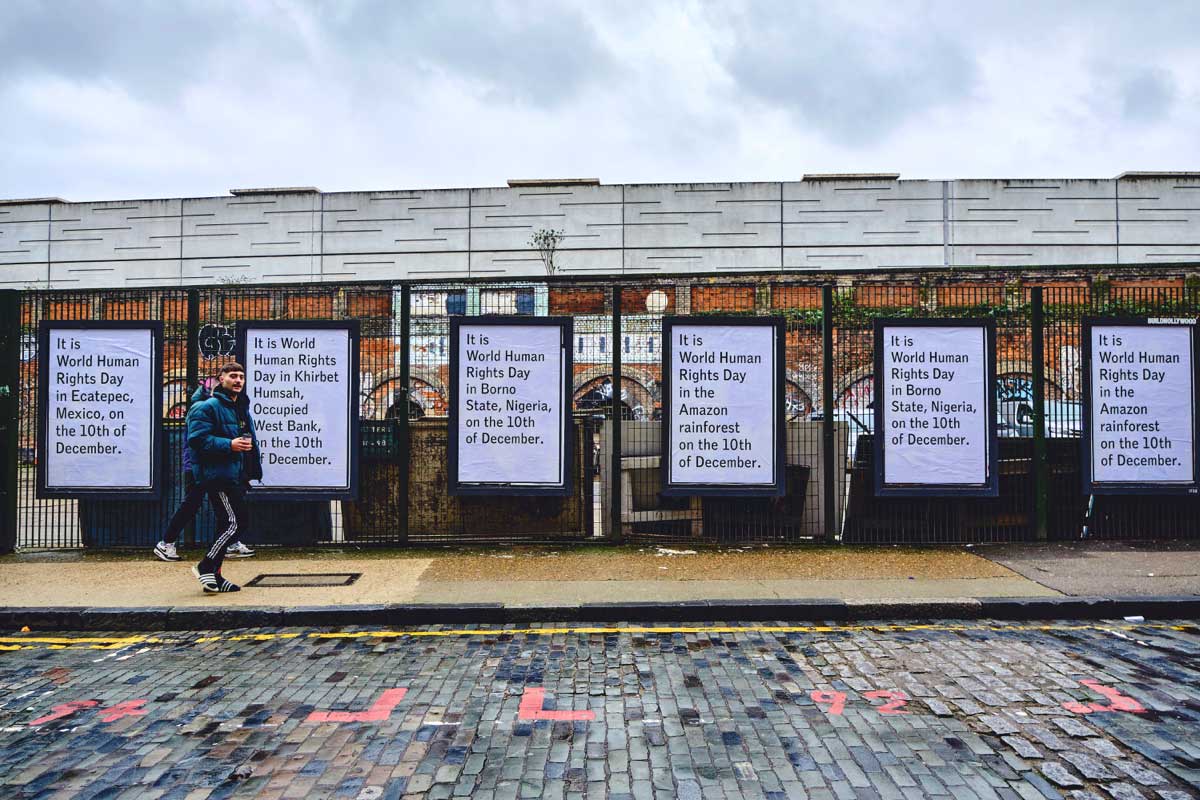 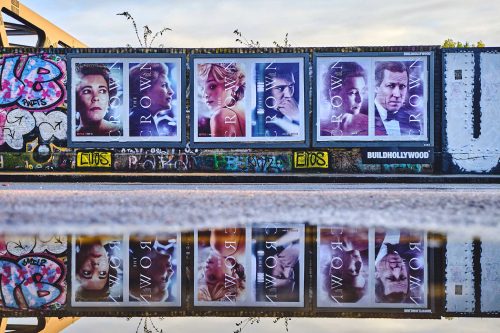 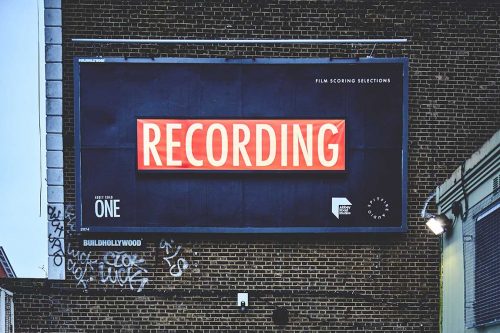