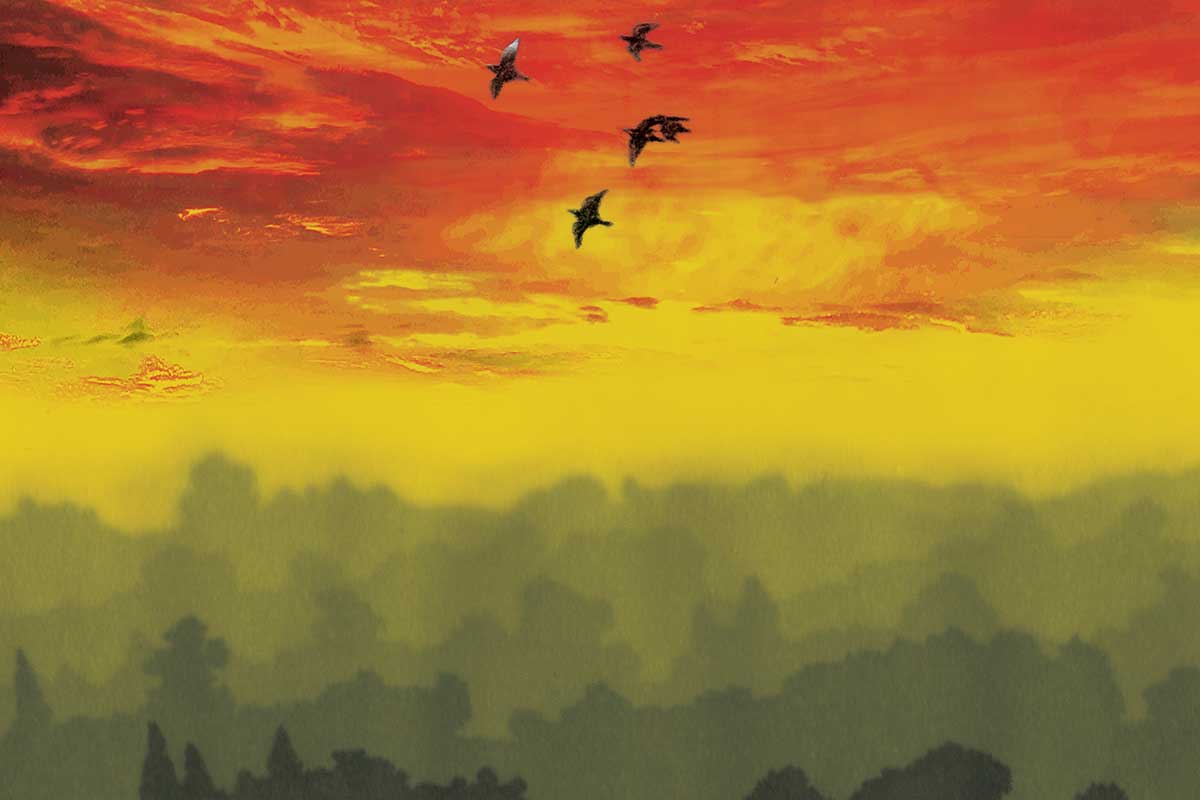 Known for producing over two decades worth of album covers and single record sleeve artwork for Radiohead: visual invocations or equivalences to the band’s edgy, expansive and unpredictable aural grit and splendour. In tandem with the musical inspiration it seems the artist Stanley Donwood has also been driven by a profusion of apocalyptic concerns.

‘Kid A’s panoramas of power were fuelled in part by 1990s news reports of war in former Yugoslavia; visuals for ‘OK Computer’ derived from imagining a nuclear winter, the aftermath of human devastation; abstract imagery for a ‘A Moon Shaped Pool’ evoke the unpredictability and power of the elements.

Likewise, the stark, graphic rendition of London deluged by floods for Thom Yorke’s solo album ‘The Eraser’ pictures man made doom. And there’s work like Ness (pub. 2018) – a collaboration with nature writer Robert Macfarlane – inspired by and portraying a very strange landscape, the shingle spit of longshore drift known as Orford Ness in Suffolk. Donwood started making imagery with materials found on the coast: sea coal, mud and clay. But as is often the case with this artist – who is so flexibly and sensitively attuned to making work that elicits feelings, experience and senses beyond words – the chosen media morphed to fine penmanship, detailed drawings that capture both the ephemeral atmospheres and architectural archaeology of a strip of land that’s been used for decades as a military test site. Bad Island published earlier this year on the cusp of UK’s COVID-19 pandemic is a stunning and stark wordless graphic saga. Eighty monochromatic lino prints made over a period of two years chronicle both the discovery of a rich and magical world and, with a sense of inevitability, its destruction.

So what’s with the work showcased in this latest Your Space Or Mine outing for BUILDHOLLYWOOD? Are we seeing Donwood’s sunnier side? “I’m trying to make pictures that elicit some kind of happiness. It’s a novel concept for me,” said the artist. Looking at the vertically formatted Sol, its giant refulgent sun almost seems able to warm viewers’ faces. It is a beautifully pared down design with rich flora in the foreground and skeins of woven luminosity emanating from the star at the centre of our solar system. The source of light and life.

A larger work called Set will appear on 48 sheet billboards and other sites across the country. A detail from a fundraiser released through Donwood’s new imprint The Lost Domain, Set shows a squall of birds silhouetted against a raging sky. It is sublime, and uplifting but still, there’s clearly unnerving depths to Donwood’s foray into cheering the nation.

That said, in an effort to chime with the artist’s newfound shift towards brighter subject matter, we embarked on a light-hearted chat with Donwood, proposing a baker’s dozen of questions covering fashion, beauty, celeb and lifestyle news. All in a further bid to temper the mood of gloom that stalks the land. Here we go: 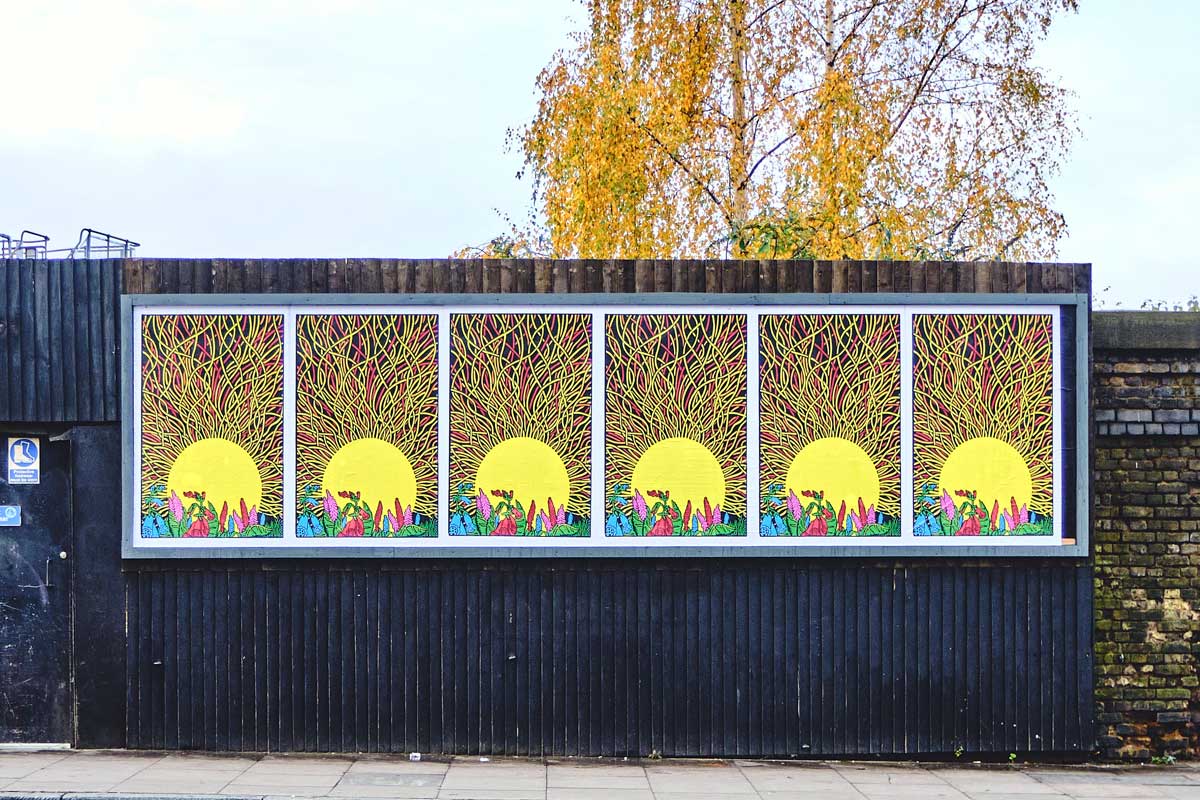 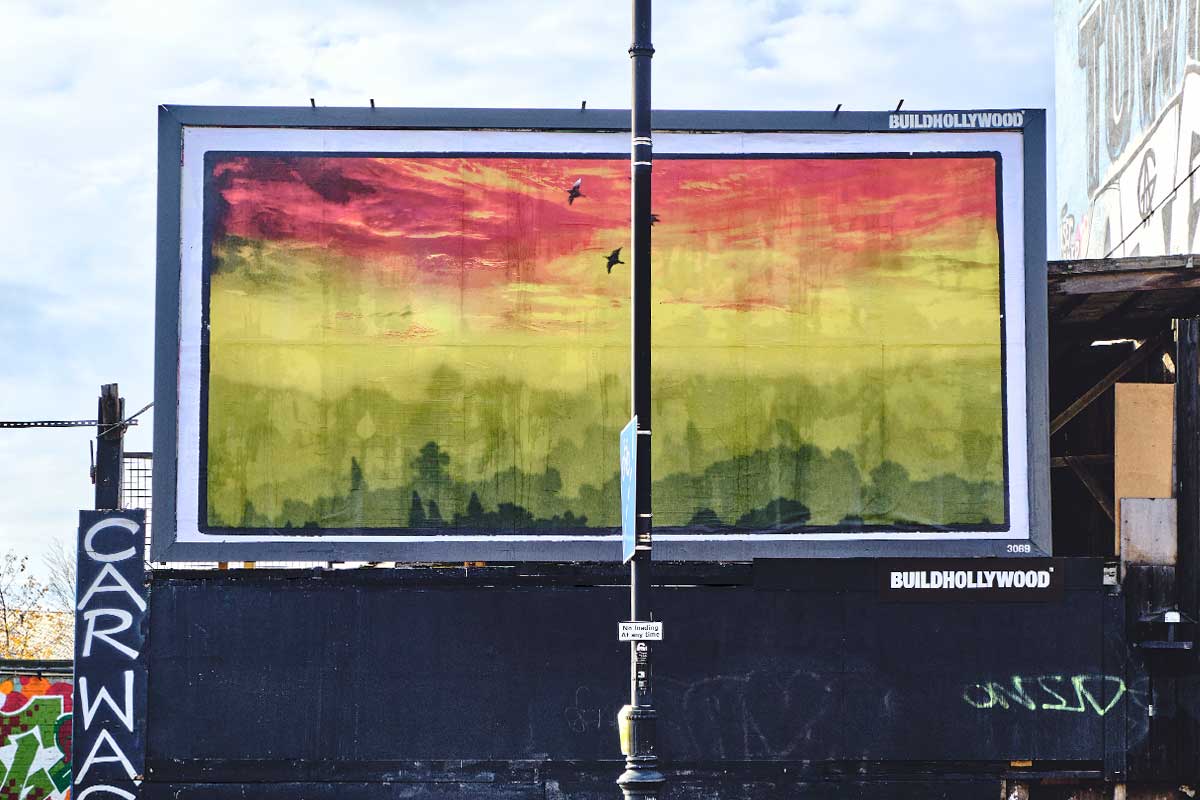 We caught up with Stanley in an interview to discuss the inspiration behind his work and his unique creative process.

What gets you out of bed in the morning?
Just general feelings of horror.

What’s your first memory of being ‘lost’ in making pictures?
I used to draw immensely long pictures with my brother, on the backs of rolls of paper that came from computers. It was striped with green and had ASCII text printed on it, but the back of it was blank white so ideal for drawing on. We used to draw the history of civilisation; first little shacks and lots and lots of trees and then more shacks, castles and so on, rub out some of the trees, draw houses, roads and eventually we would have rubbed out everything and replaced it, and the drawing would be of housing estates and motorways and office blocks, with maybe an old timber-framed house left somewhere. Hours disappeared doing this.

Who would you say has influenced you the most?
Hmm. Interesting question, to which I have no proper answer. I am definitely influenced by lots of people, but I don’t know who’s influenced me the most. Maybe Bill Drummond for some things. Maybe Anselm Kiefer for other things. Mostly though I’ve just stolen ideas from people and haven’t even had the decency to remember who they were. It’s terrible really. I blame it on my faulty memory, which I probably damaged early with hash and now, due to the passing of time, will not get any better.

You’ve obviously been inspired by Radiohead over the years but what other music has made you think ‘Yeah, I’d enjoy creating artwork in response to that.’?
Ah! I’ve got an answer for that one. There’s a composer called Arvo Pärt who I could make pictures for while listening to his music. He’s a composer who makes quite minimal and beautiful music. And also a musician called Murcof. Again, beautiful music. Trouble is, they both have lovely record covers already. They don’t need me at all.

Who or what makes you laugh or at least smile on social media or elsewhere?
There’s a bloke from Paris I follow called Vincent Sardon. He has a studio near that massive cemetery in Paris where loads of famous people are buried. He makes rubber stamps of swearwords and other rude stuff. I can’t understand French, but when I use the translate feature on Instagram it kind of works. He’s a very droll character. Sardonic, you could say.

What is your favourite word?
Pterodactyl.

What is your guiltiest pleasure?
Reading Jackie Collins novels. Actually no, I don’t feel guilty about that. It’s not that, it’s reading the Daily Mail online. I think they make money from every reader somehow. At least that’s what I fear. And that’s where the guilt comes from. I read it for the comments, which are fucking hilarious.

If you could go back in time, where would you go?
I would not go back to any time except the 1990s which were objectively about as good as things got, except I had no money and small children and fear of the future. It turned out I was right to be scared about the future but at least my kids were okay. And I did earn some money in the end.

What single thing would improve the quality of your life?
If everyone started being nice.

You’ve made and showed your work in so many different environments, how do you feel about seeing Sol and Set on public street display sites throughout the UK?
It’s kind of fantastic; I started my so-called career making art on the streets and now I’m doing it again, only without having to actually do it myself. I’m very lazy so this is a fucking excellent result.

Who would play you in the film (opera?) of your life?
Pac-man.

How would you like to be remembered?
I really don’t care.

Tell us a joke?
I only have one joke left. I used to know loads but sometime around my mid-teens I lost them all. They just went. I don’t know how. The only one I have left is very long and is about superheroes and – oh no. That one’s gone too, now I think about it. I can remember most of how it goes but the punchline is all fucked up. Sorry. That’s a shame. I had it all ready, and it would have been like a hilarious essay, because it’s quite long. It would have been a brilliant ending to this, and you’d have laughed your head off because it was brilliant. My apologies. Have a nice day…

So, no jokes and this newfound sunnier side to Donwood is – how to say? – subtle. But the artwork he’s currently showing on the street with YSOM is bold, resplendent and heartening. We all need a bit of that at the moment. 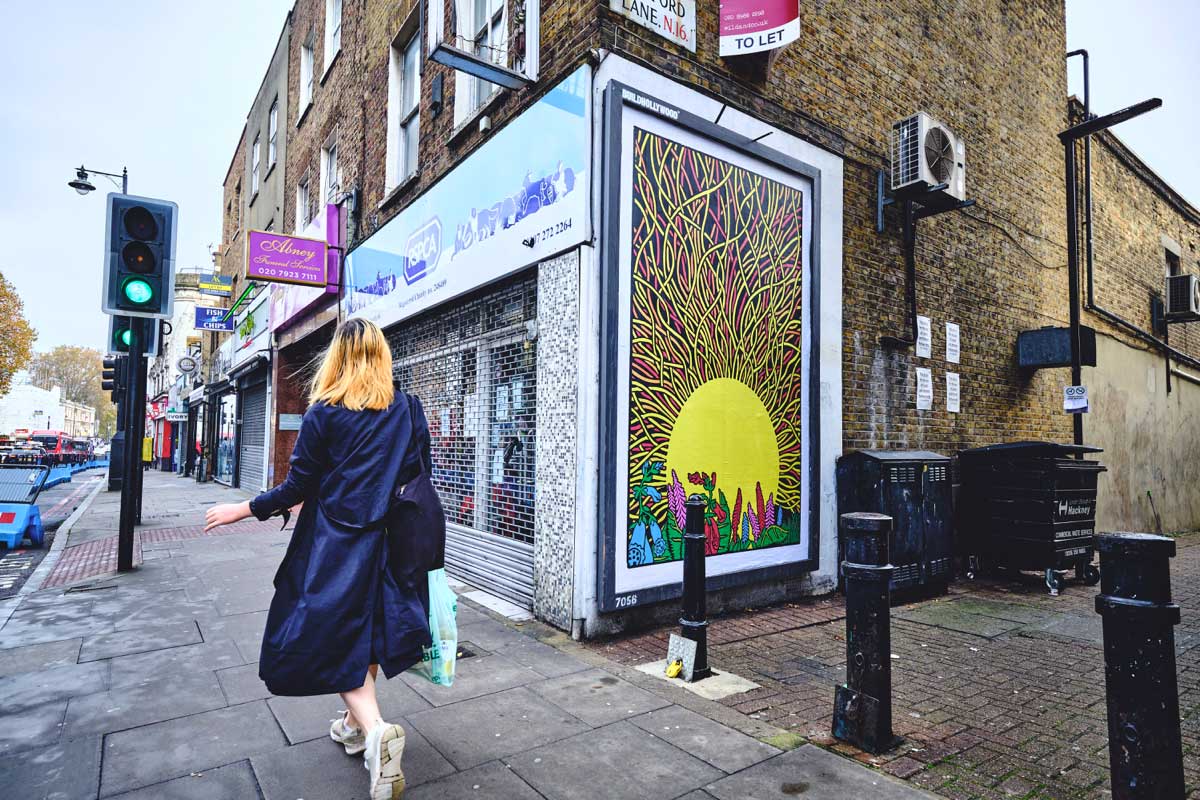 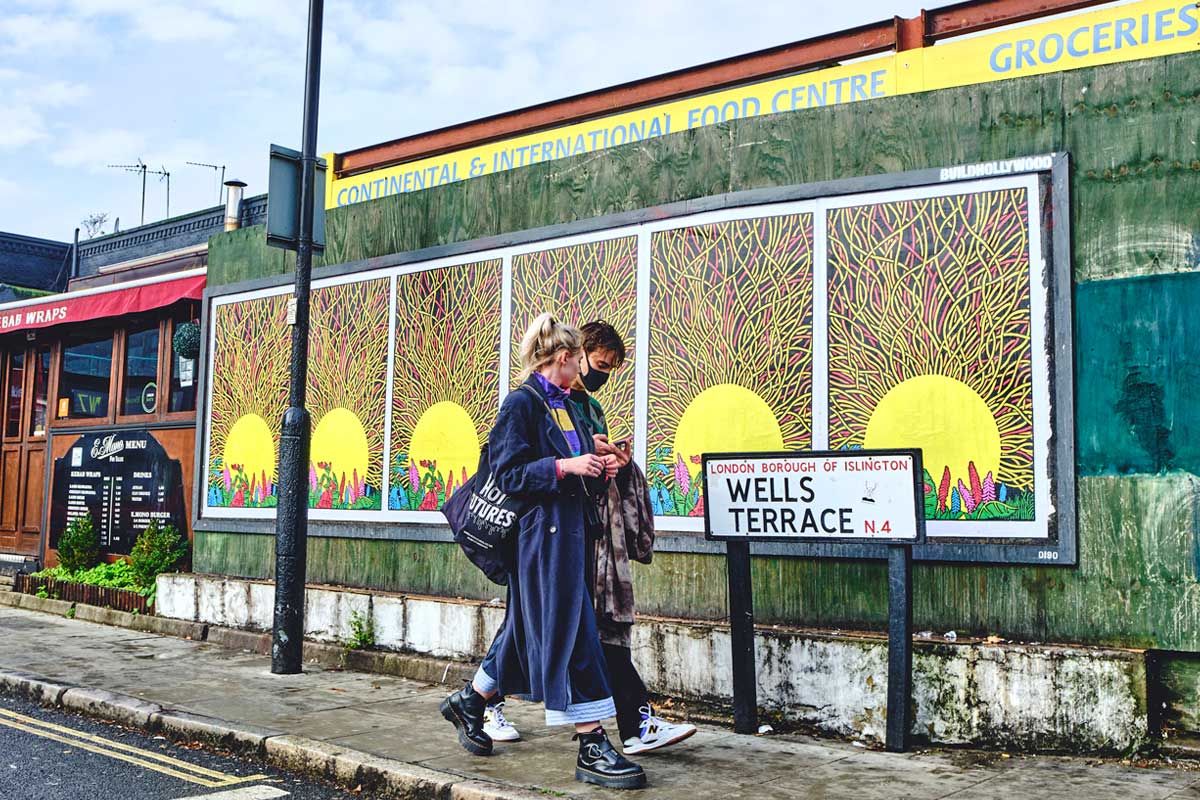 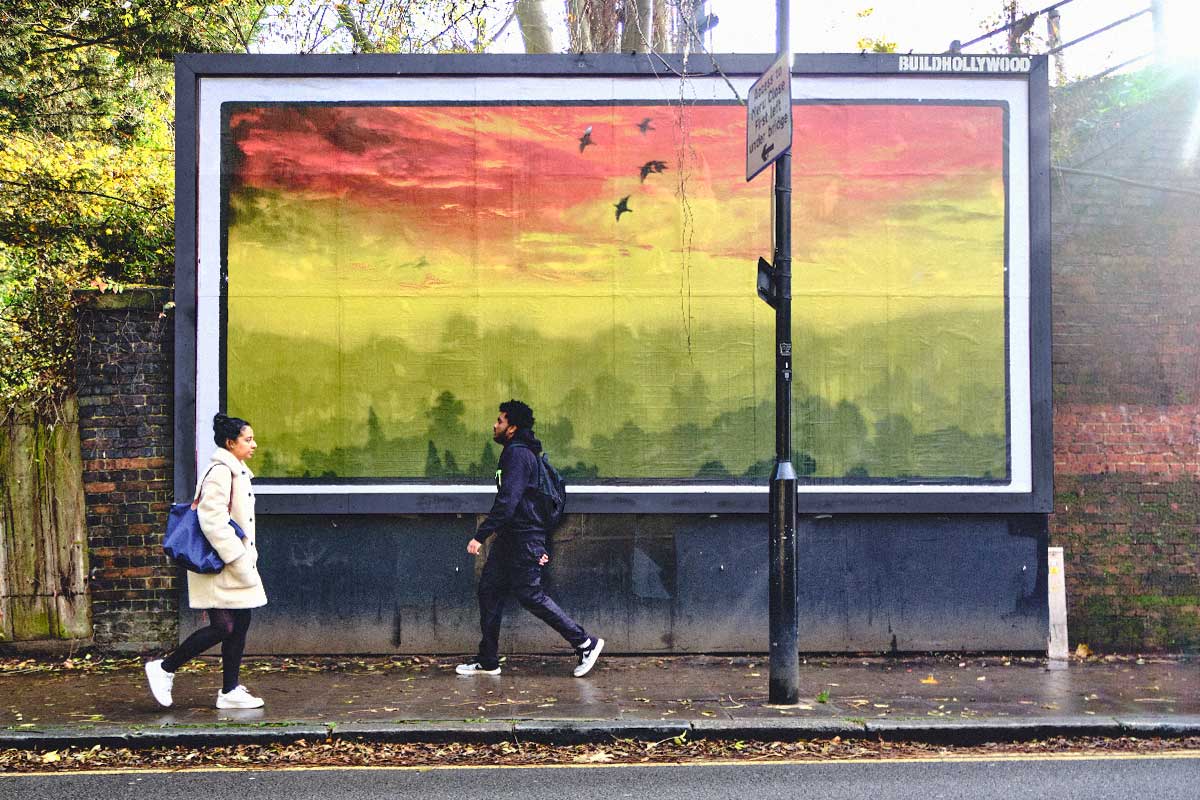 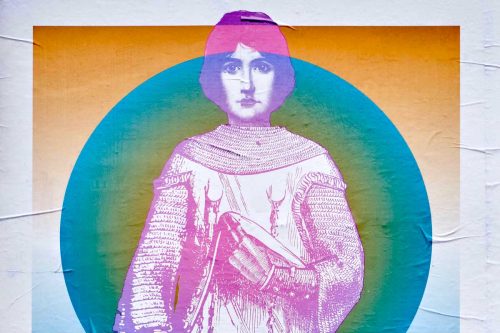 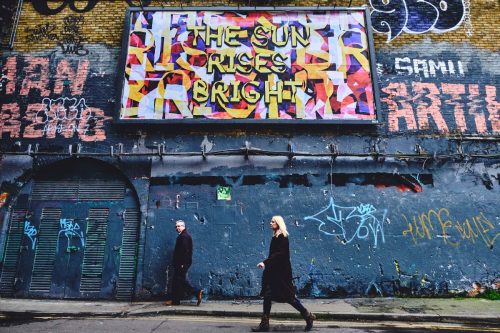