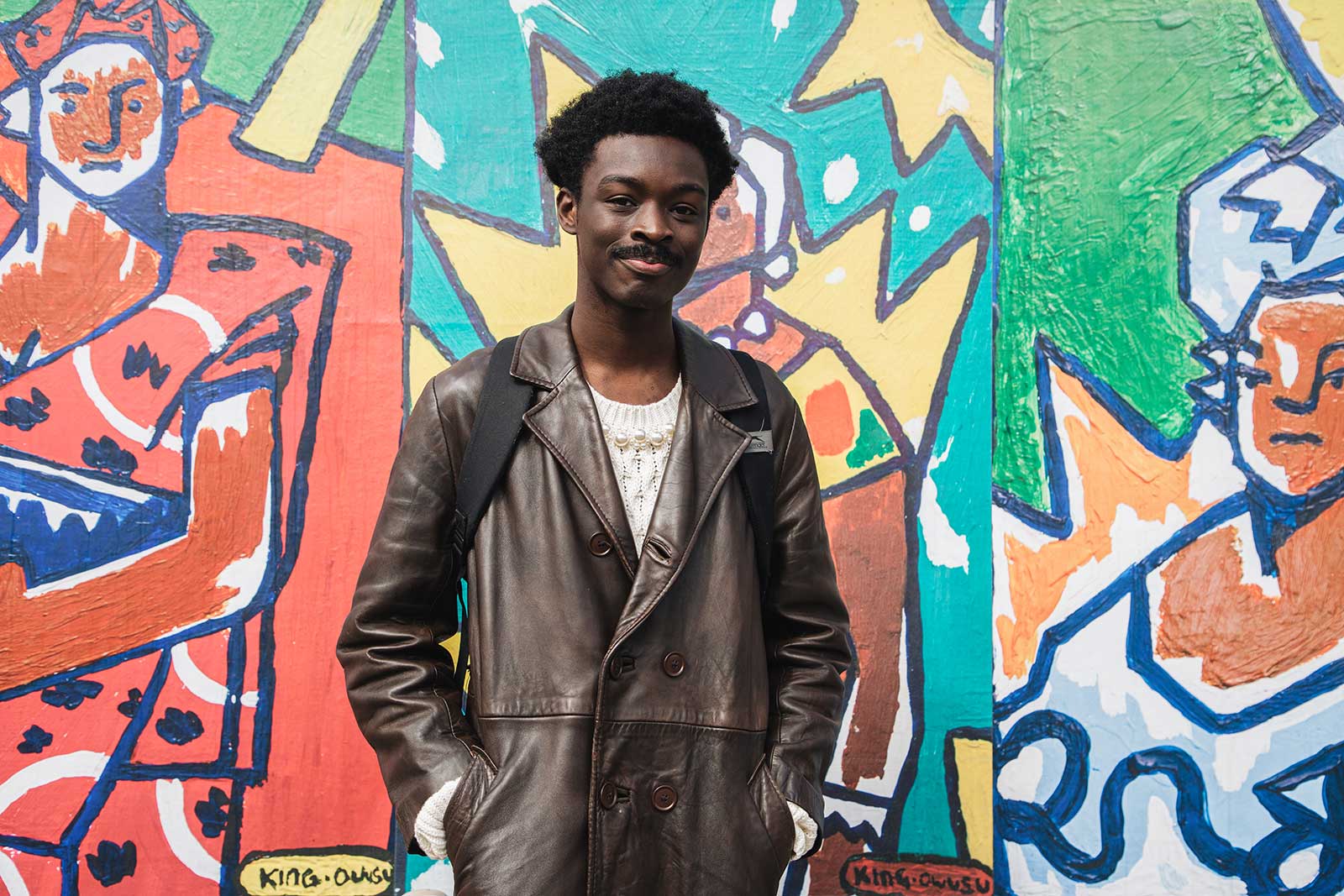 The artist, illustrator, and model celebrates his West African heritage by representing the inspiring matriarchal figures in his Ghanaian-London community

Talking with King Owusu, we return continually to the idea of community. It’s the recurring element that influences, motivates, and facilitates his work as an artist and illustrator. Often drawn in marker pen, his colourful, narrative-led artworks are anchored in a fundamental desire to share some simple truths about humanity, community, and inclusivity, and to enlarge our empathy. He tells us, “One aspect of my work that is really important to me is its accessibility and telling stories that highlight and capture the black experience.”

Not only is his art highly influenced by his roots as the child of Ghanaian parents, it’s also informed by a spirit of generosity. His work is born from and of the communities that raised him, and he’s driven by a desire to give something back. Reflecting on his childhood as the youngest of seven, Owusu recalls, “At home, I was like a little fly on the wall just listening and taking in all the creativity that was being conjured up.” He remembers being particularly inspired by an art project his brother initiated in the local community. “He made all these really beautiful, detailed portrait paintings documenting the people growing up on our estate at the time,” he says, “Such a kind and simple concept.”

London itself is integral to Owusu’s practice, exposing him firsthand to a kind of visceral collaboration-in-action – the exciting moments where cultures collide and witnessing how these encounters can generate something new and dynamic. Growing up in Wood Green in North London, he was surrounded by a vibrant West African community alongside the wider multicultural influences the capital had to offer. “In London, we are blessed to have so many diverse people from all over the world that help build and shape our communities,” he tells us. “I have really appreciated and enjoyed the diversity not just in culture but also in ideas and ambitions.”

Whilst studying design at CSM, Owusu met South London photographer and filmmaker Campbell Addy, who signed him up on sight to his diversity-first agency, Nii. As a model, Owusu has been featured in Love magazine, Dazed & Confused, and Farfetch. Considering the exciting and inextricable relationship between fashion and art, he says, “Fashion also creates the opportunity for art to be made into textiles and for print to be worn. I think about the t-shirts Keith Haring made which made his work more affordable and accessible to a wider audience.” 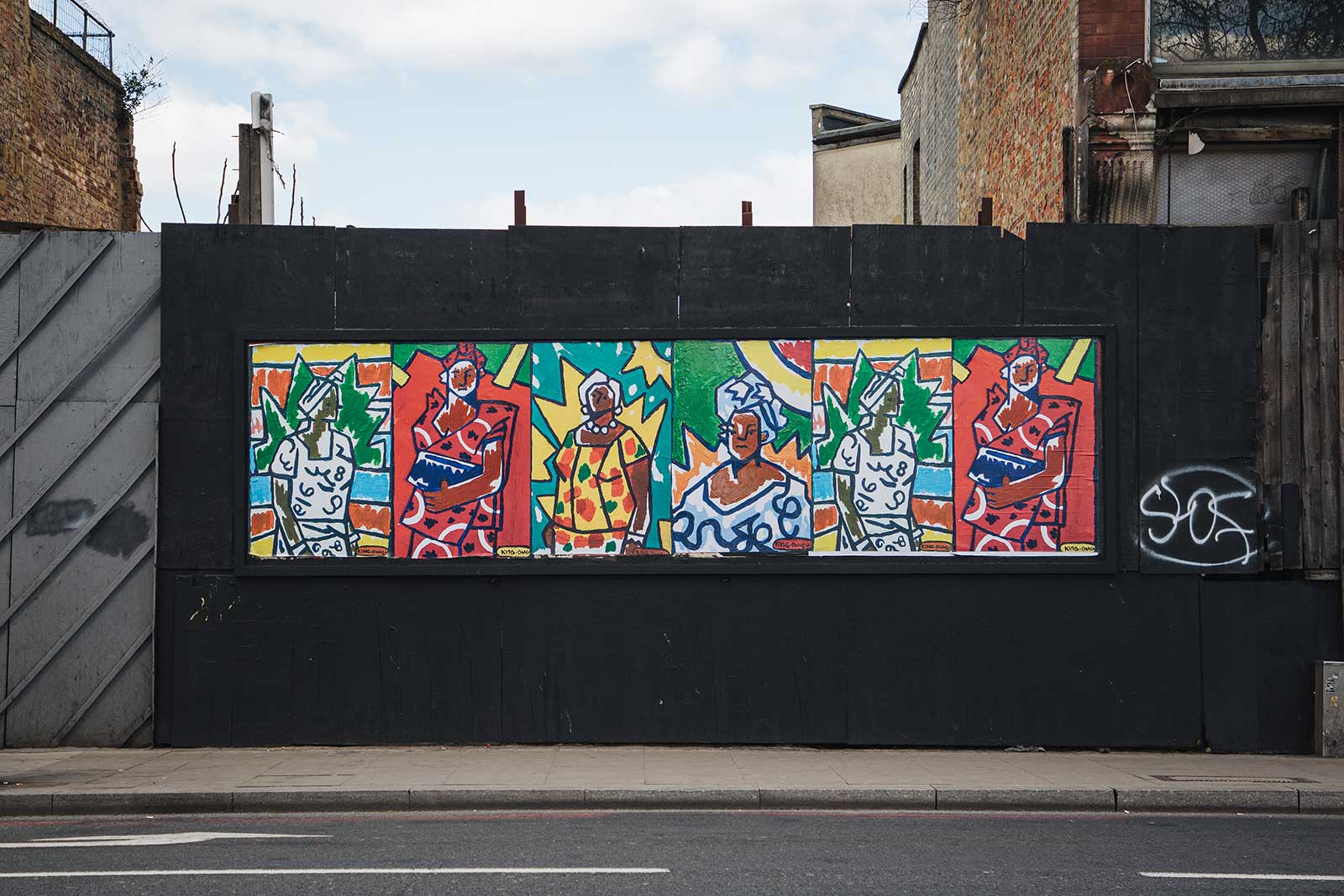 Similarly to Keith Haring and his contemporary, Jean-Michel Basquiat – two of the most prominent artists to emerge from the febrile art scene of 1980s New York – there’s a quality of graphomania and spontaneity about Owusu’s work, as if drawing is a compulsion. Like the two seminal artists, Owusu has created his own unique visual language made up of recurring colours, motifs, and characters; a distinct lexicon of figures and hieroglyphics. Just as some of Haring and Basquiat’s most famed early artworks were the provocative graffiti with which they decorated NYC’s streets, buildings, and Metro, the home of Owusu’s latest project will also be the city streets

In keeping with the inclusive spirit of his work, Owusu‘s collaboration with the BUILDHOLLYWOOD family sees his artwork decorating billboards around London and beyond. Rather than being sequestered away in an art gallery, his series of loving portraits – which pay tribute to the inspirational matriarchal figures in his life – will instead go on display on the streets where he was raised. “It feels extremely surreal to see it out here; for it to exist in real spaces for everyone to see,” he says. “I hope this work can inspire other people to paint or create some art too and, for those people that recognise the symbol of these African aunties, that they too feel represented and maybe even a sense of ownership of the artwork.” 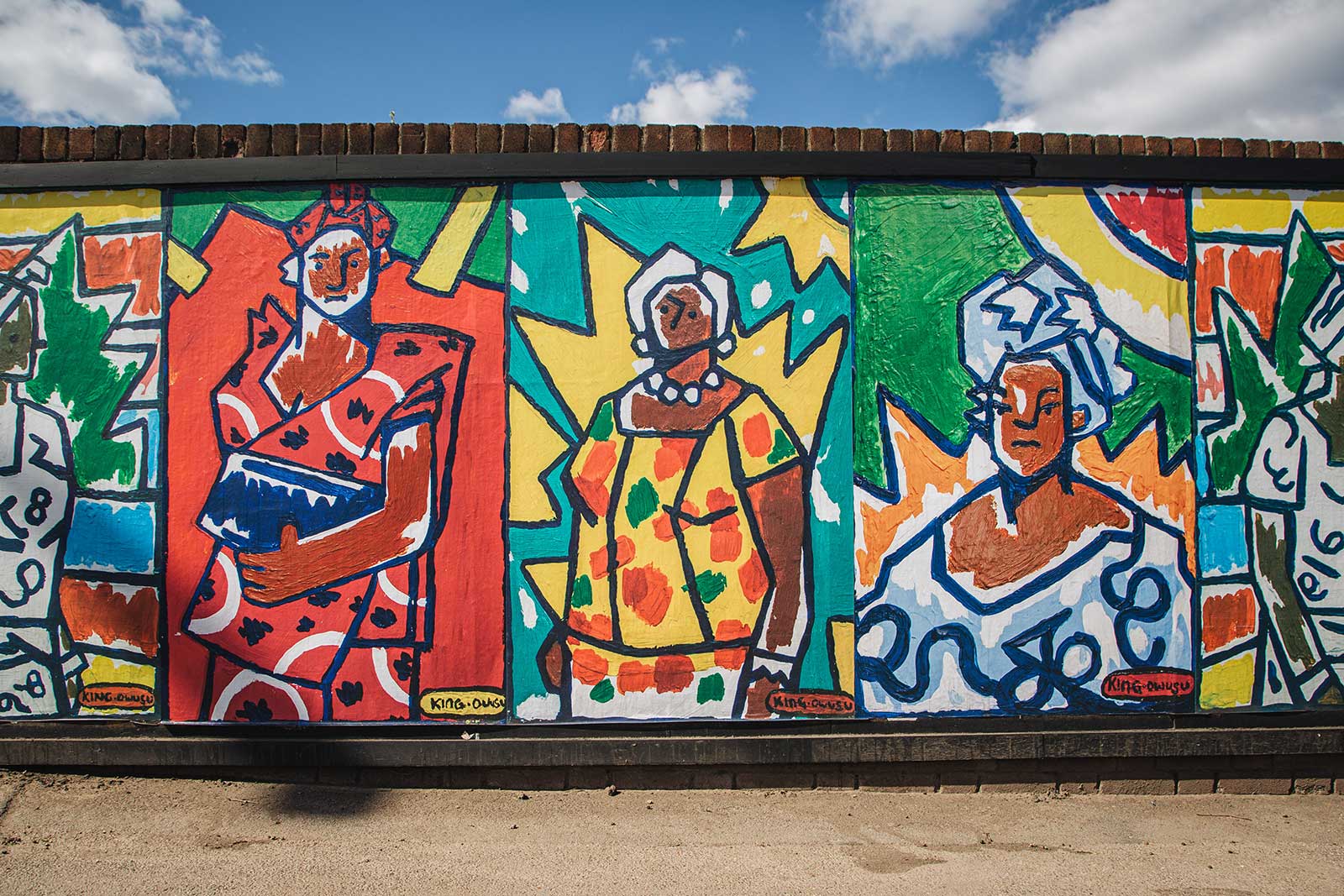 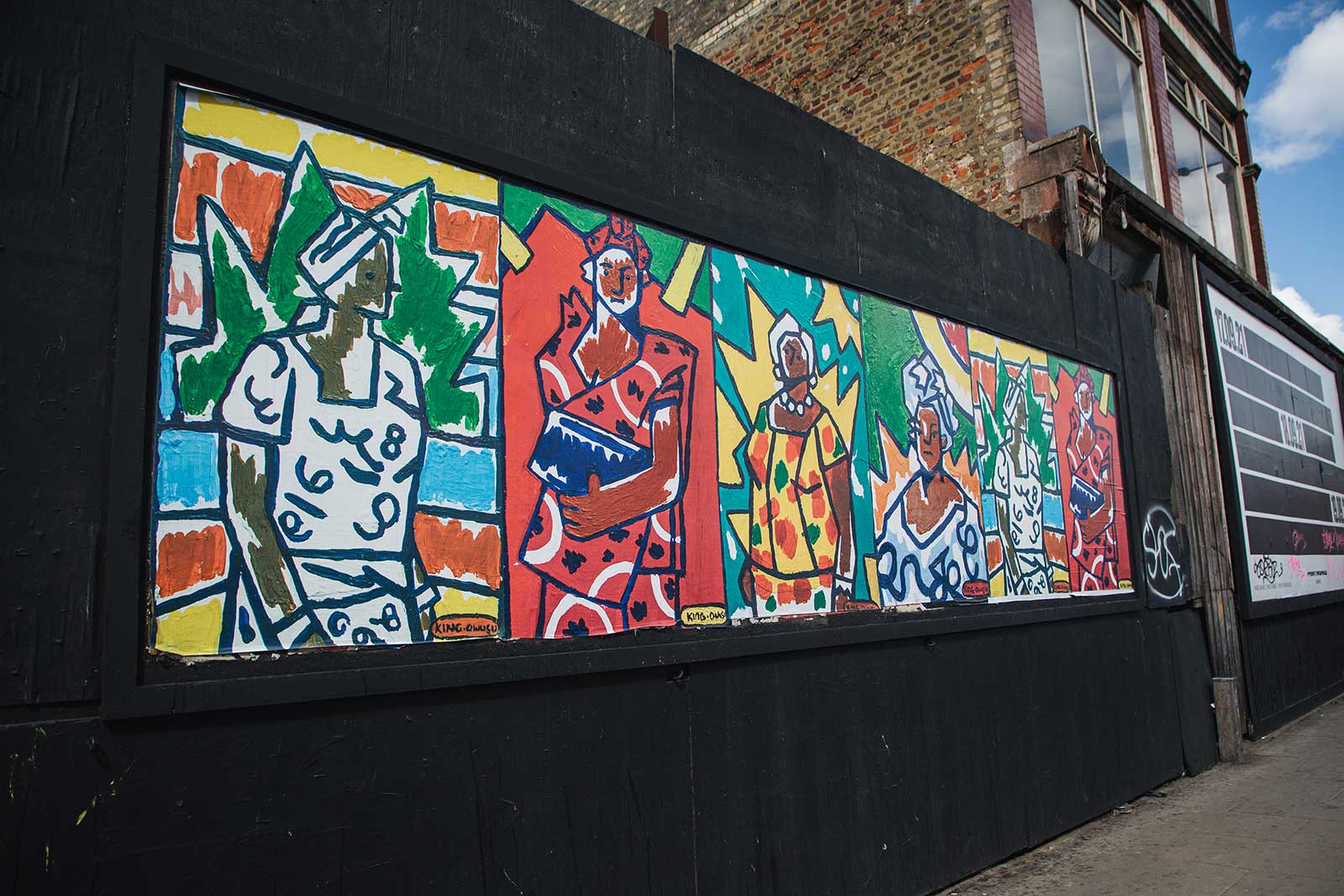 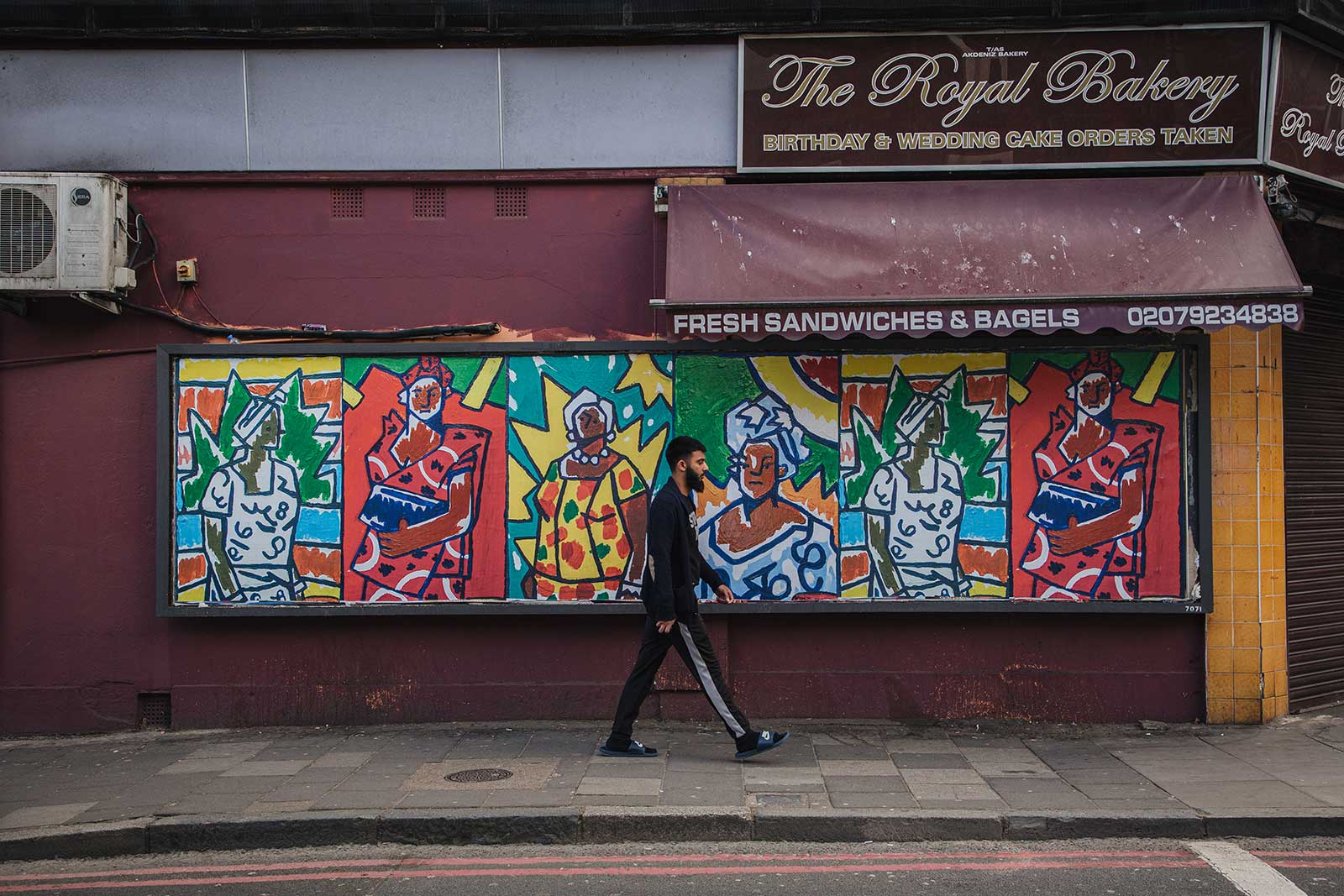 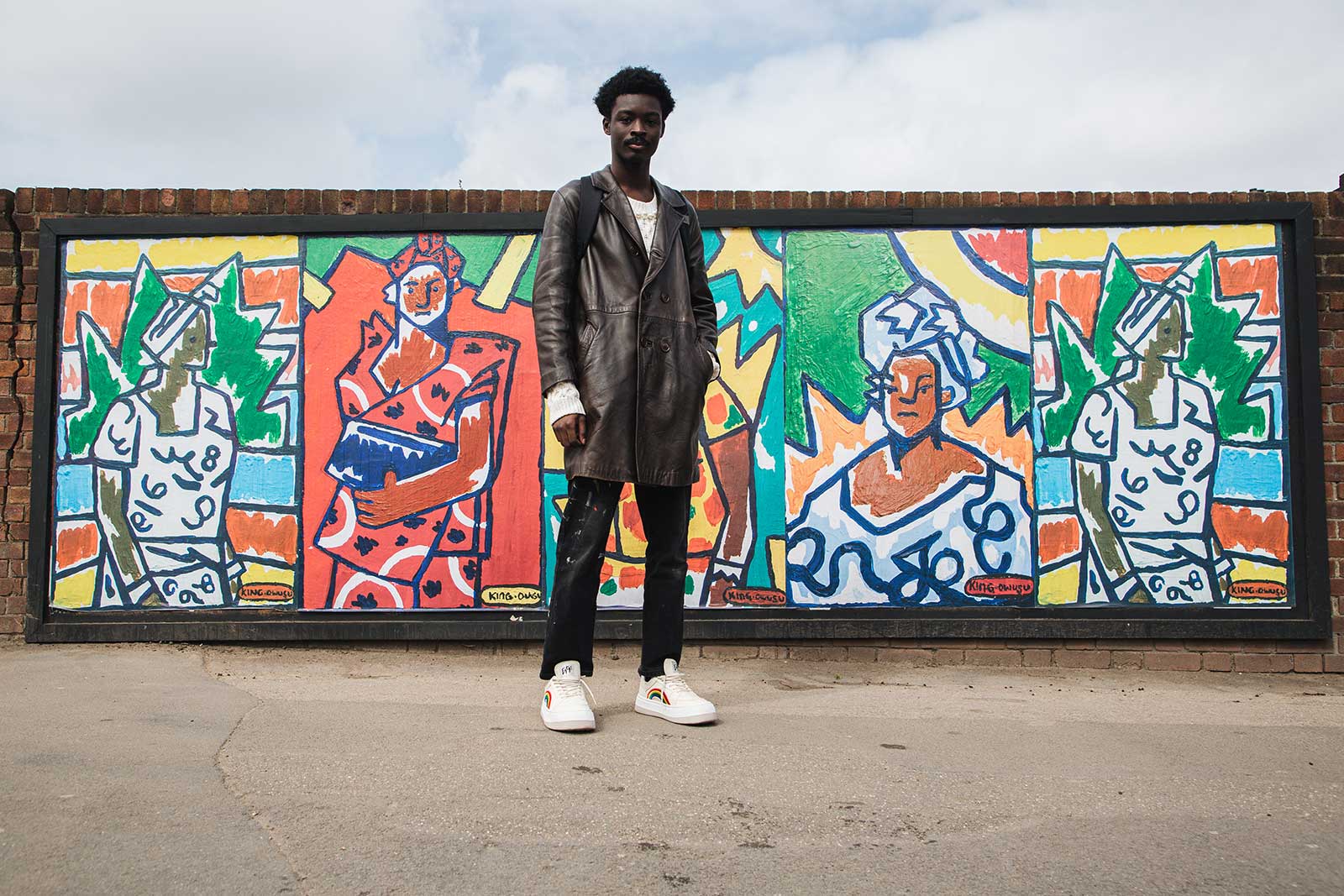