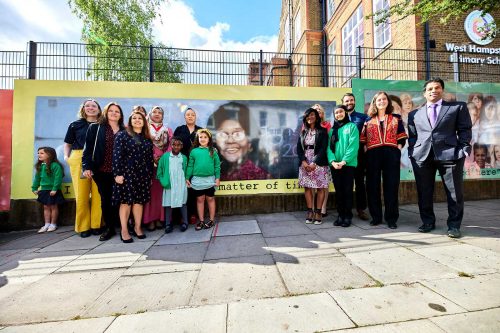 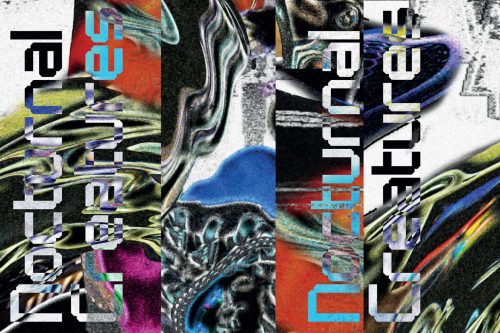 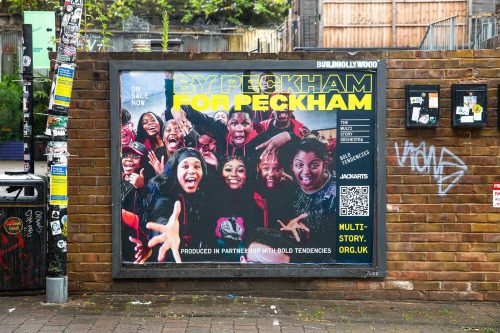 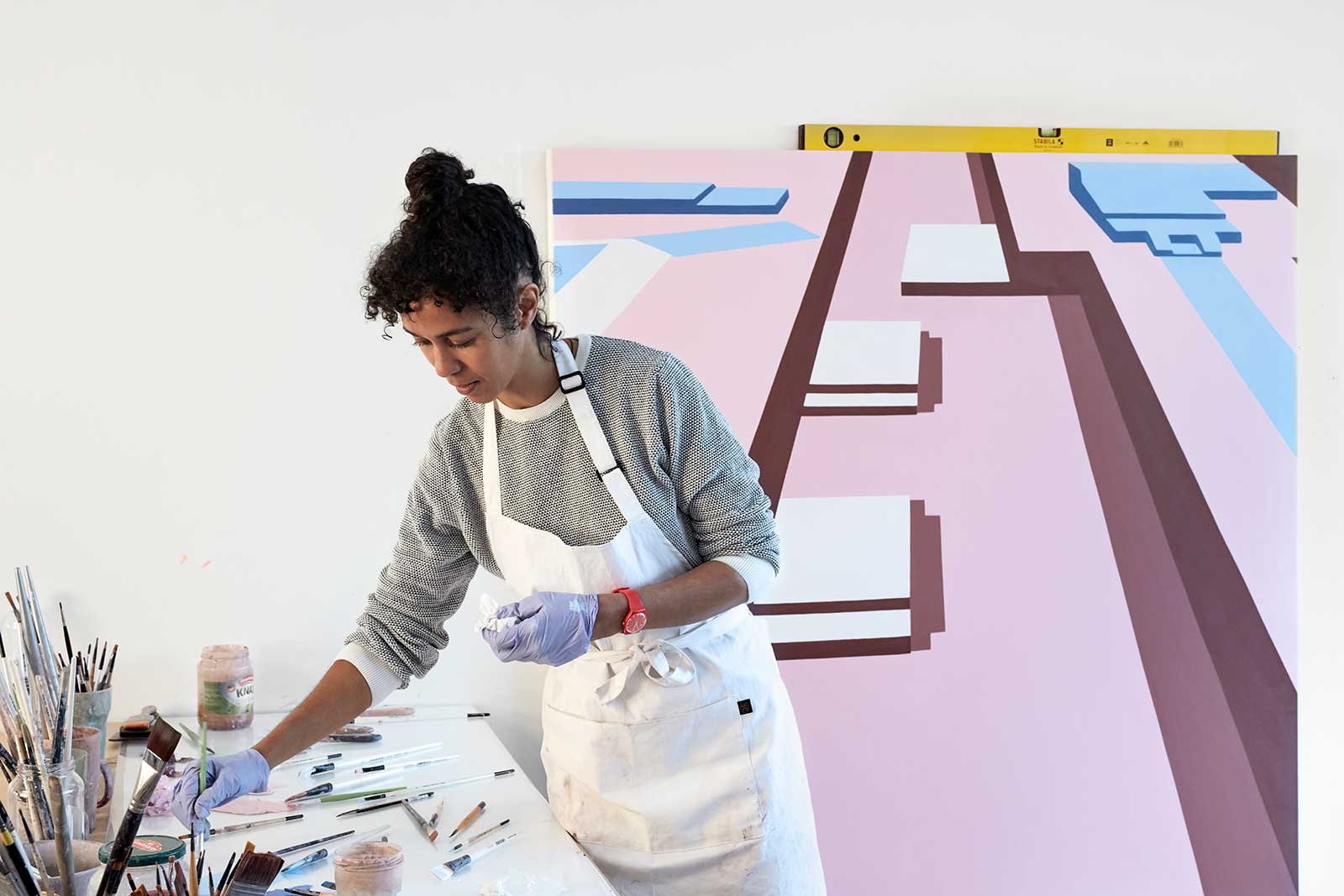 First it was the pared-down dynamism of sports courts and the architecture of athletic spaces that fascinated Thenjiwe Niki Nkosi. The artist’s interest in the people who train and compete in these venues began with re-working an old photograph of a lone gymnast having completed his floor routine. Nkosi decided to paint that white figure as a Black athlete.

This modest material intervention threw up a whole new field of inquiry for the artist. It led her to radically question how we view these spaces and the different ways we see the people that variously inhabit them. The artist has written, ‘Ideology is at work in this sport. Gymnastics has been used as a tool of propaganda, of control, of patriarchy and of nationalism. Defining what bodies should look like, what perfection is, what the human ideal is.’

So much sport imagery focuses on moments of triumph: a sprinter’s torso nudging the finish line, the dramatic heavyweight KO, a soaring slam dunk… In Nkosi’s work, by contrast, drama is played down. Faces are anonymised and it’s this anonymity of Black and brown countenances that invites us to look harder, to inquire further. Body shapes, the kit they’re wearing, the figures’ relation to each other and their surroundings all afford a contemplative array of mutually dependent shapes, colours and gestures. Rather than an unquestioning promulgation of sporting prowess Nkosi’s imagery admits the teamwork and supportive interaction on which success (and a good society) depend, ‘At the same time as lauding Black excellence can we also allow them vulnerability? Can we allow them rest? Can we allow them to be part of a community? Can we allow them to be human?’ Her first solo show, the 2020 exhibition titled ‘Gymnasium’ at Stevenson gallery in Johannesburg was both visually beguiling and subtly thought-provoking.

In her Olympic Channel podcast Nkosi told host Ed Knowles, ‘I have all these questions about sport and also about the art world.’ She refutes the idea that racism is on the wane globally because Black athletes across numerous sports have become icons. Yes, they are celebrated and adored. Nkosi suggests, however, what this hero/heroine worship doesn’t negate, alleviate or even begin to address is casual or systemic racism. The prejudiced stereotyping and othering of Black athletes persists even while they’re feted. 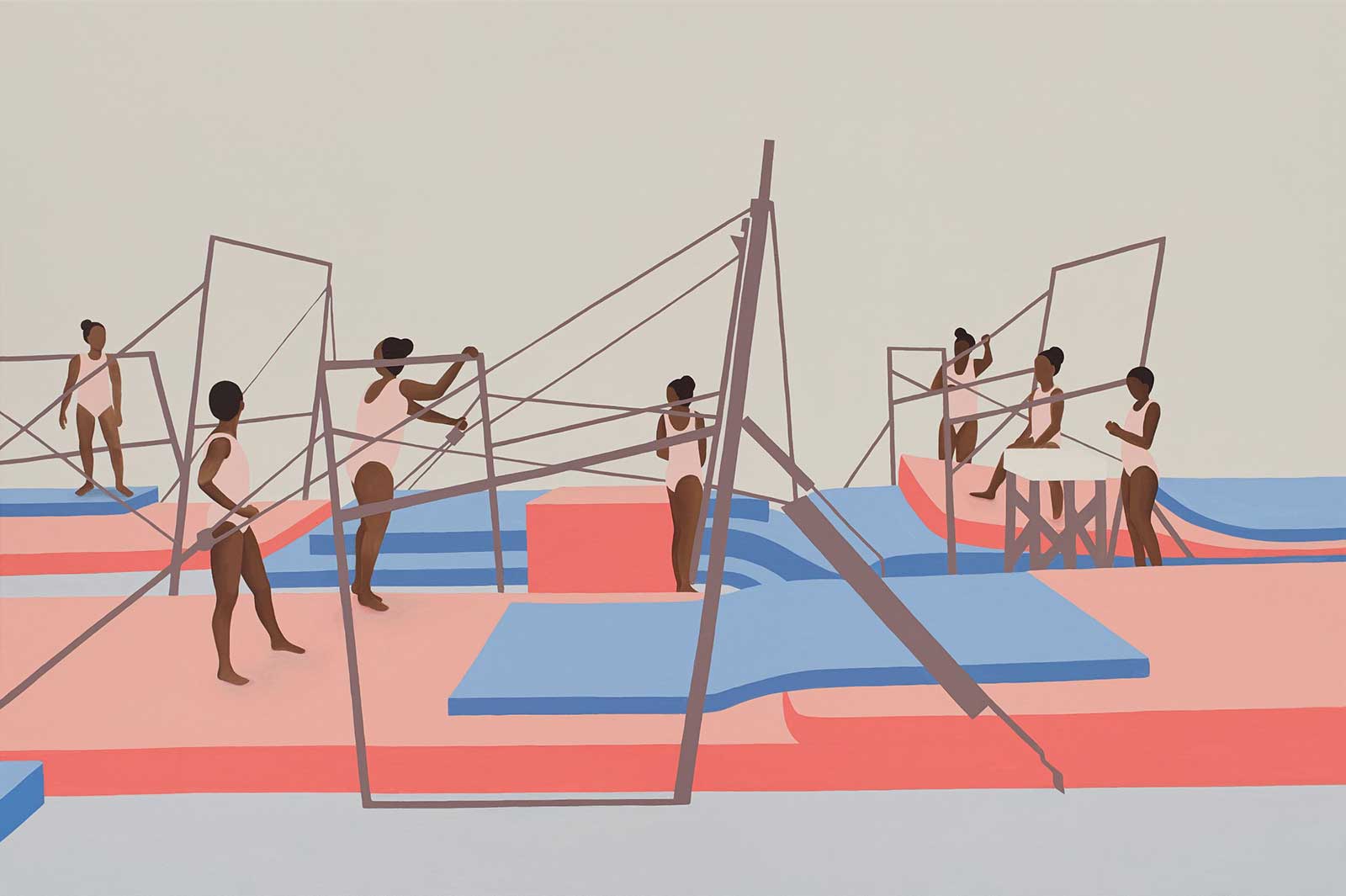 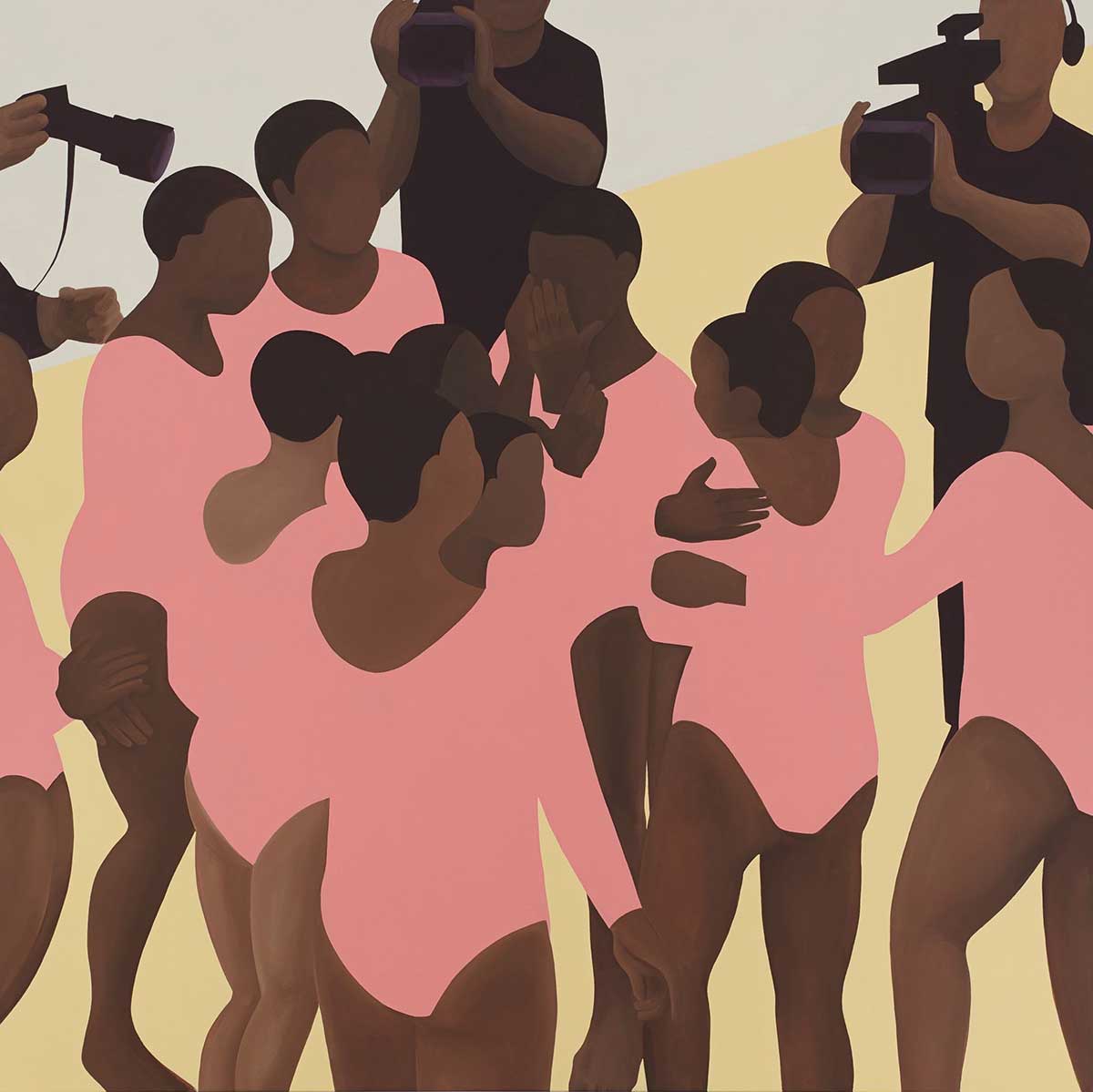 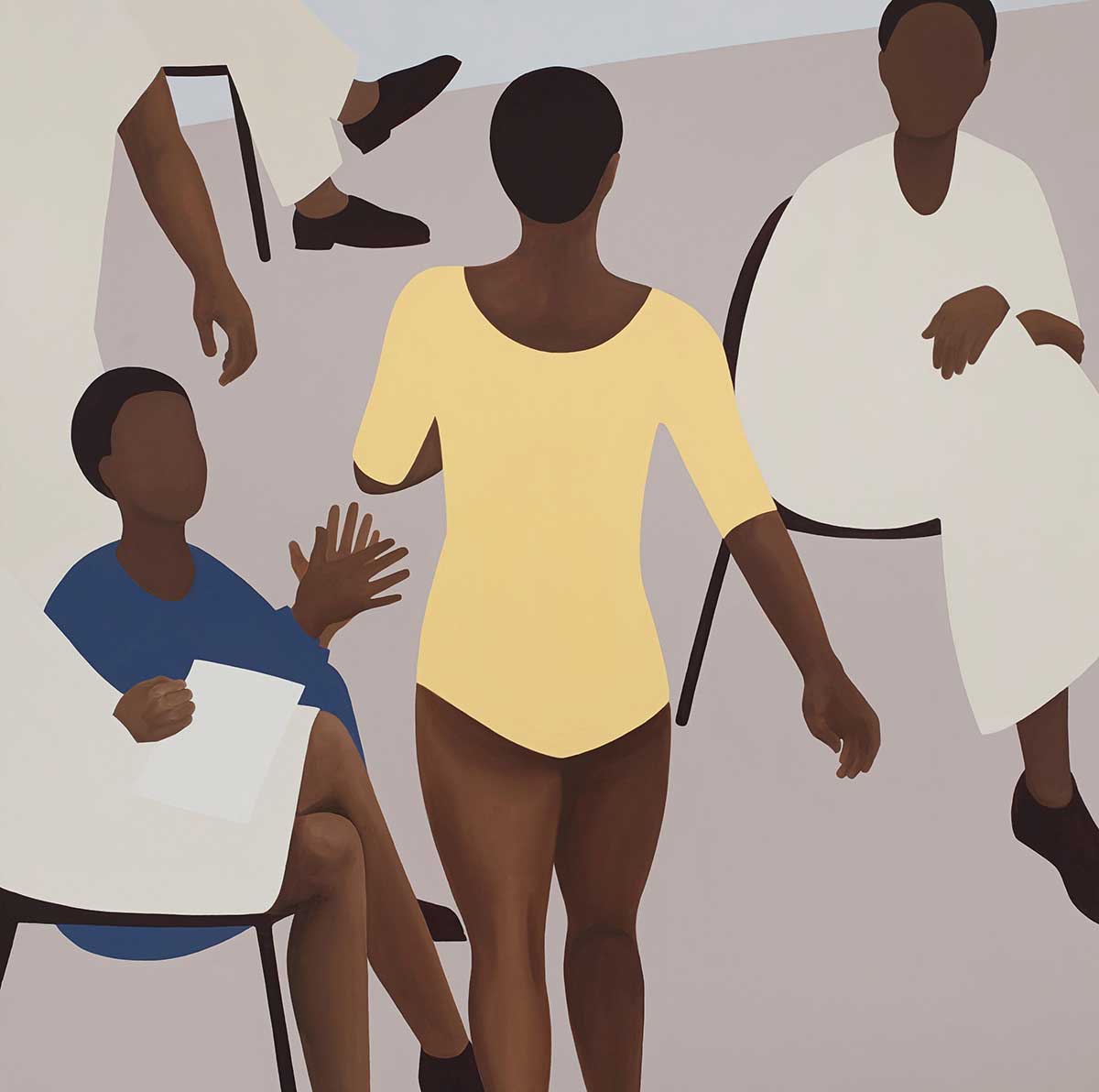 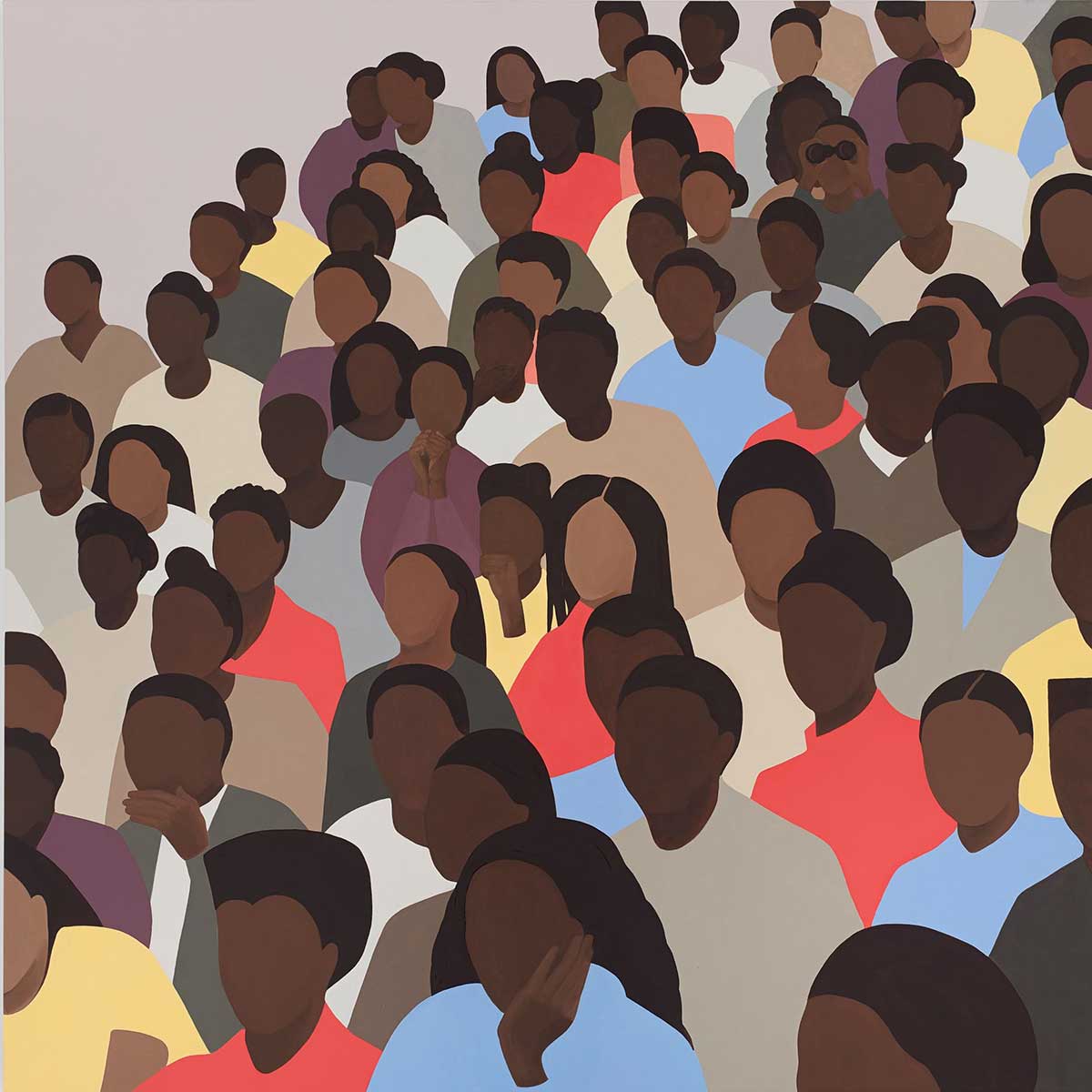 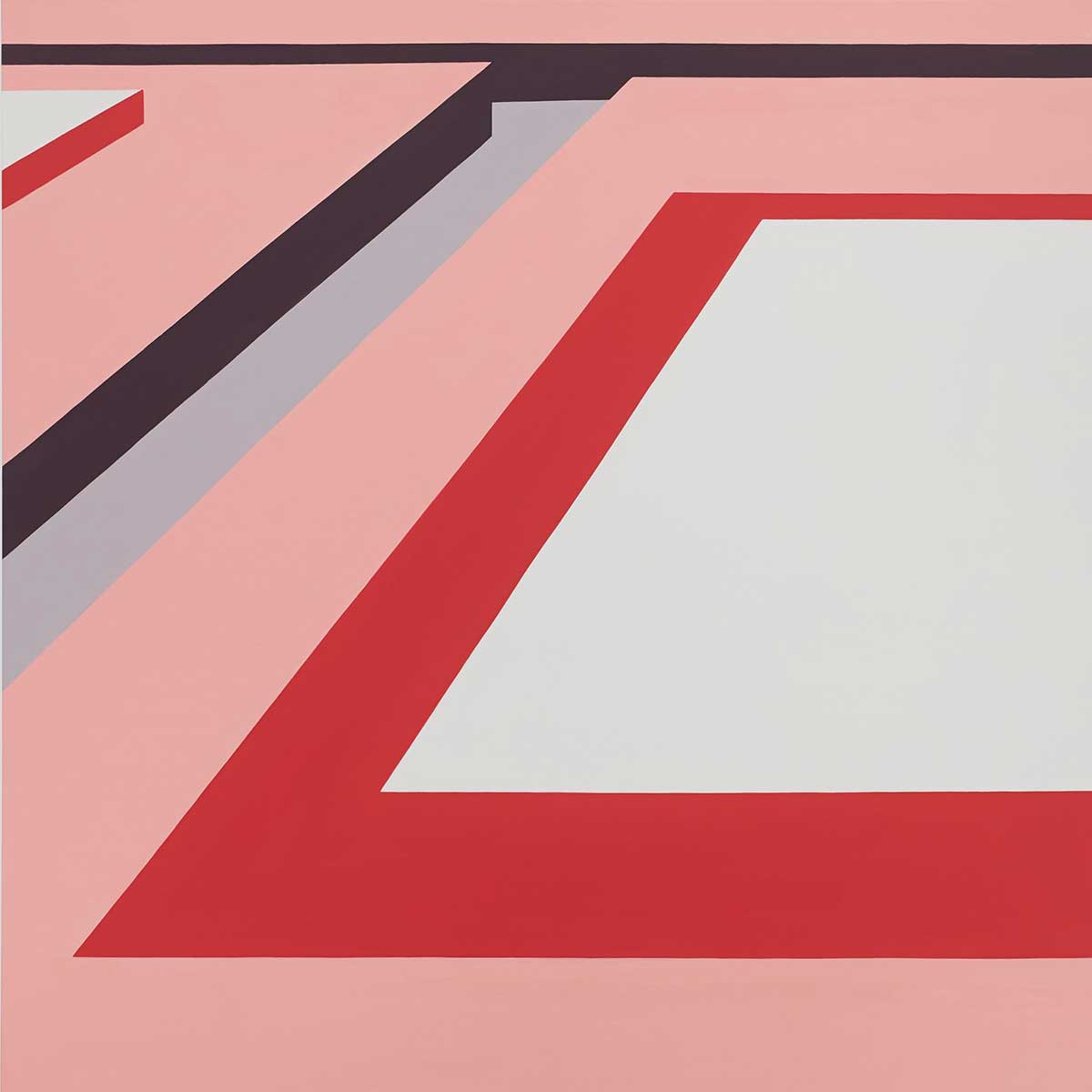 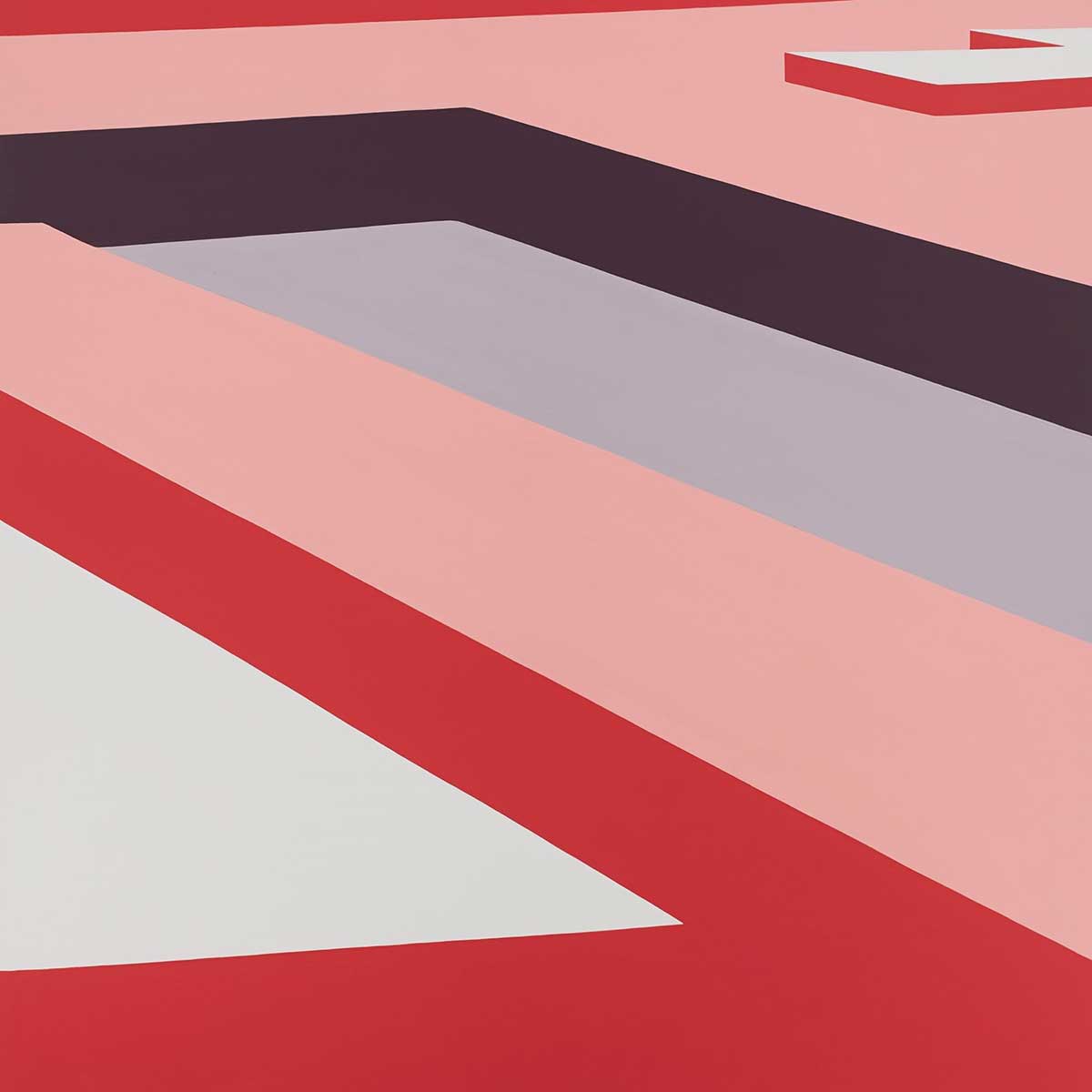 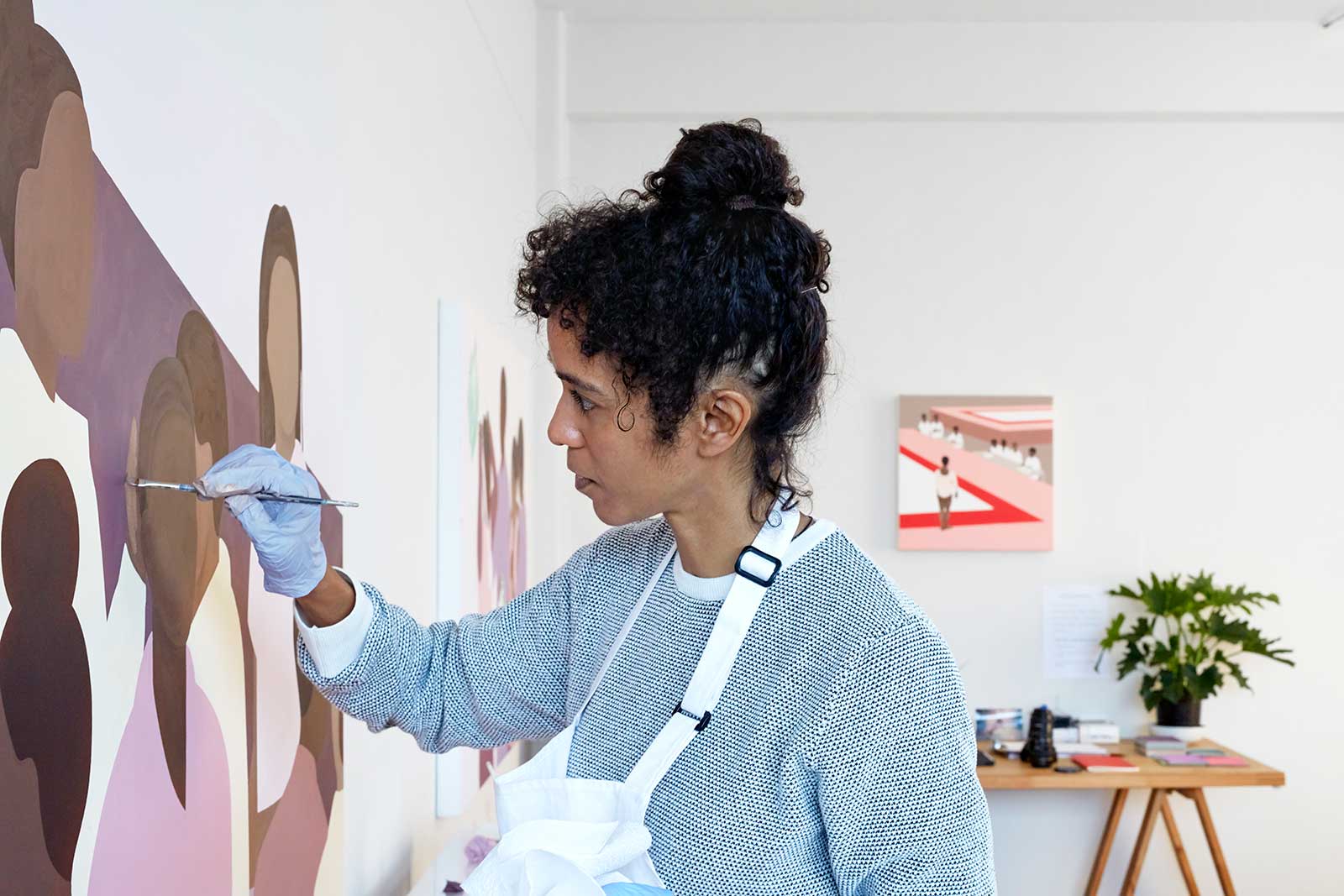 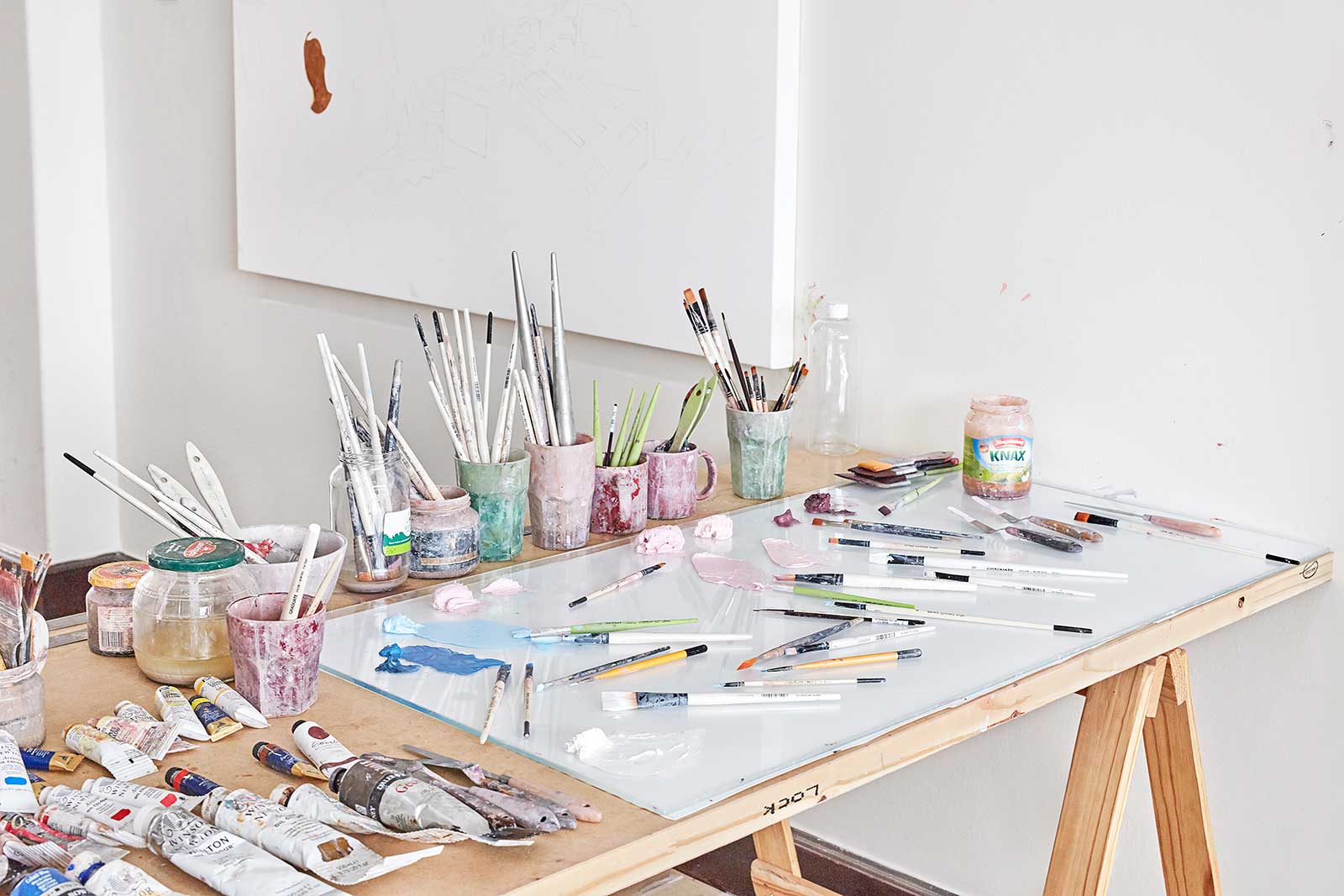 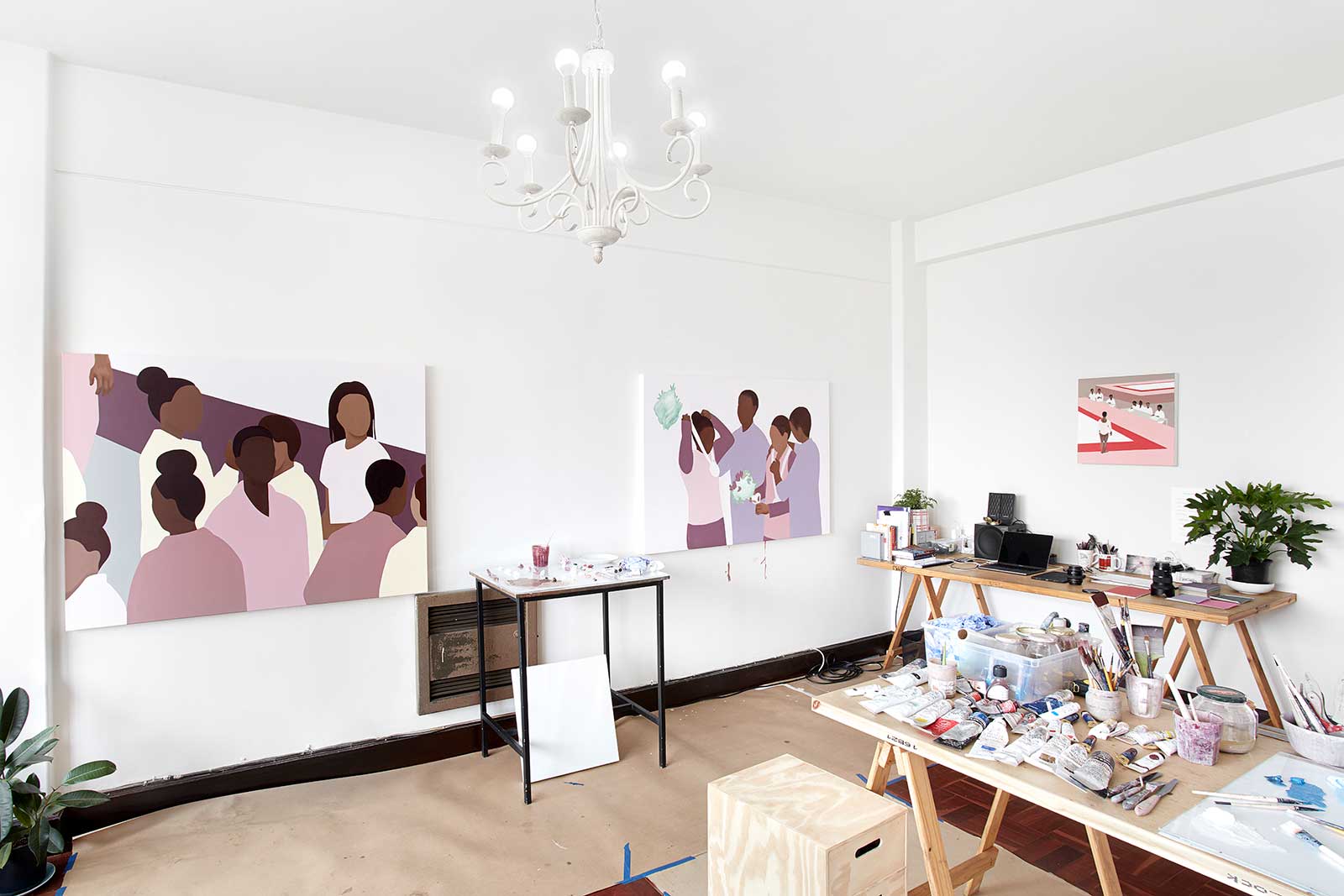 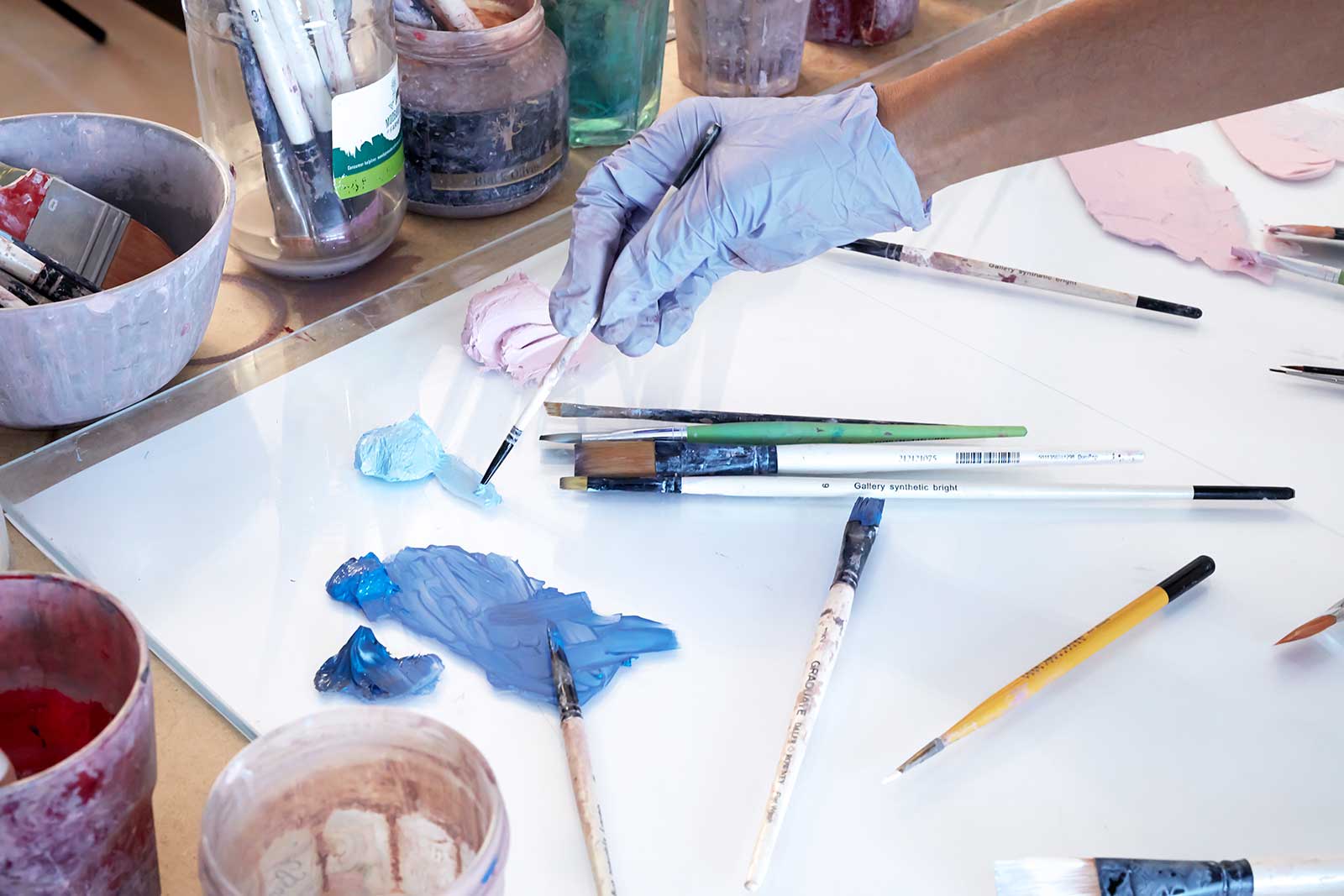 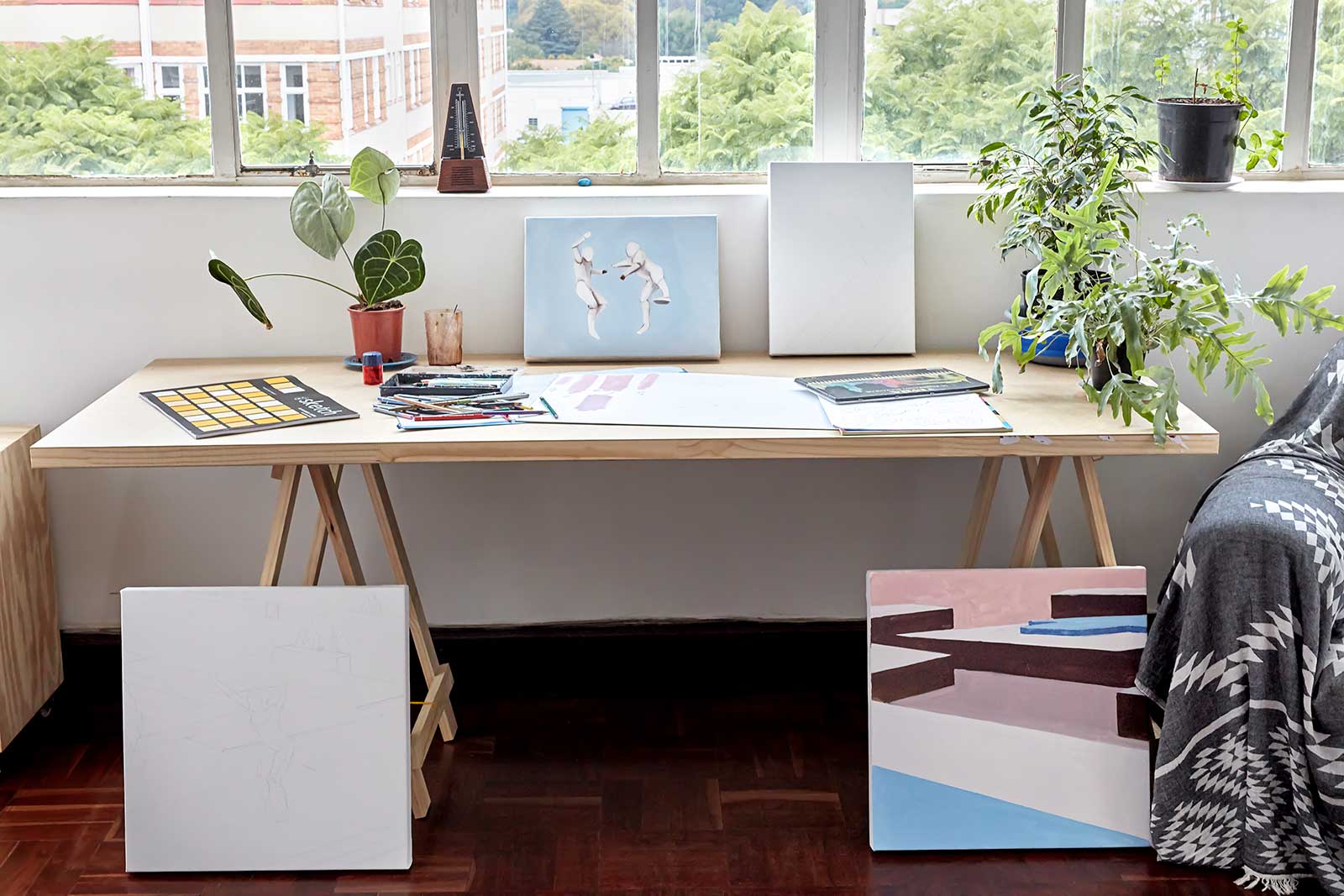 Nkosi’s contribution to the Birmingham 2022 Commonwealth Games Festival is collectively titled Equations for a Body at Rest and comprises three elements: The Same Track (video), The Name Game (poster series), and – accessed via QR codes on the street posters – an online database of information relaying a history of the Games and the Commonwealth of Nations. The art commissioning body Eastside Projects declared that Nkosi’s curated repository is designed to ‘illuminate, provoke and inspire’.

Likewise, according to Eastside Projects, the artist’s film, The Same Track, ‘works with the idea that the Games, including its current iteration, is implicated in an ongoing political project, centuries in the making.’ 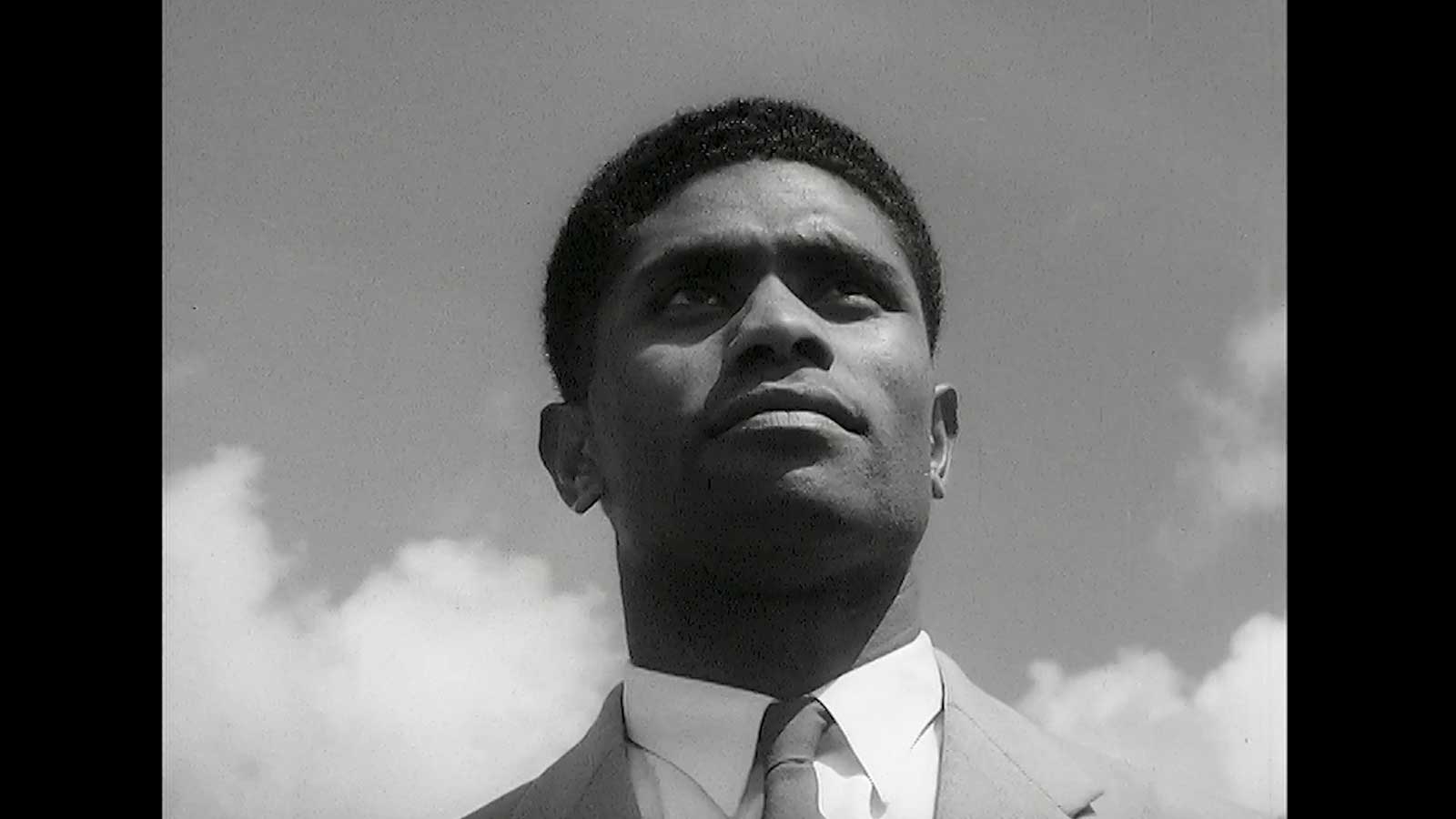 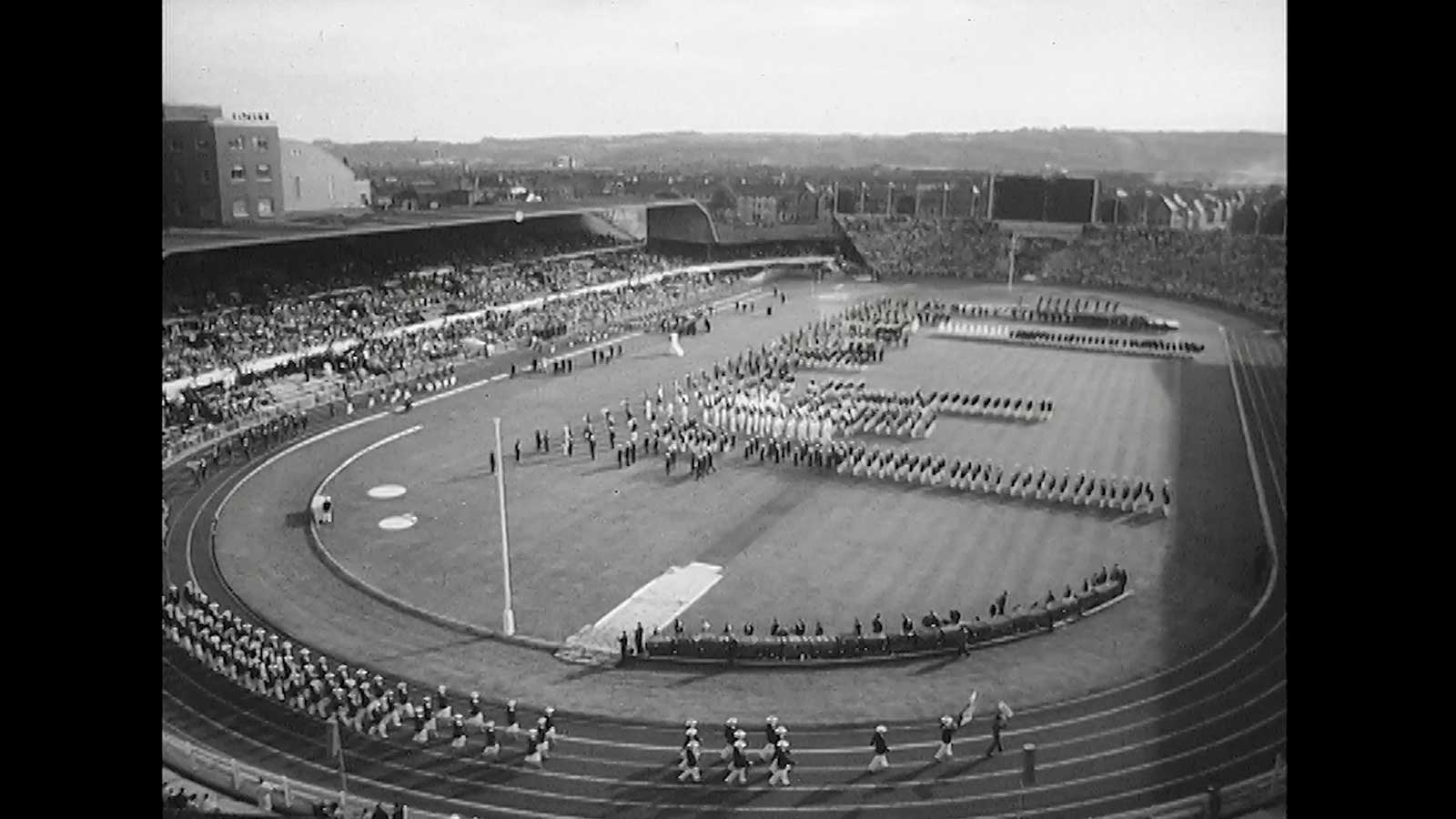 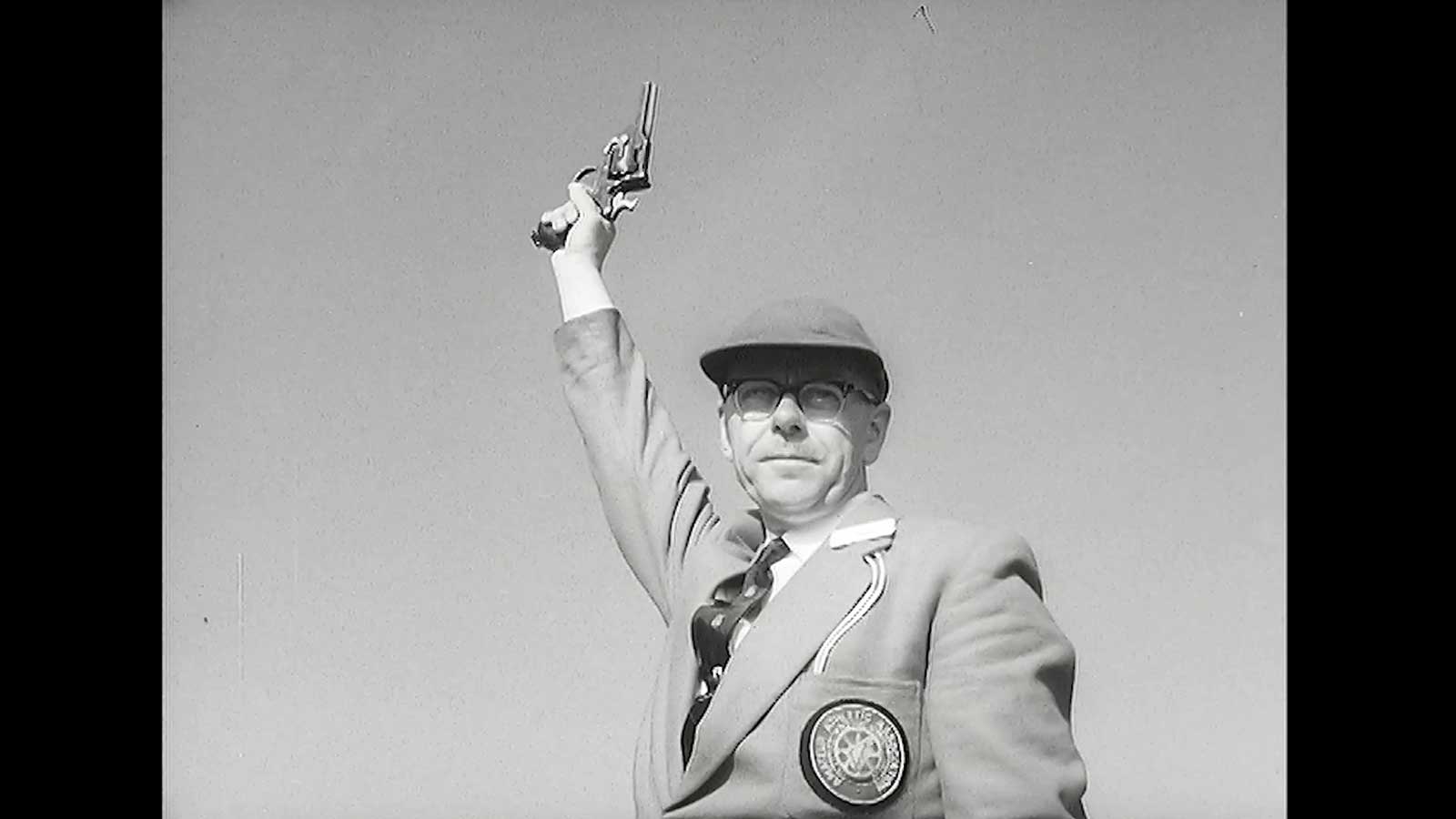 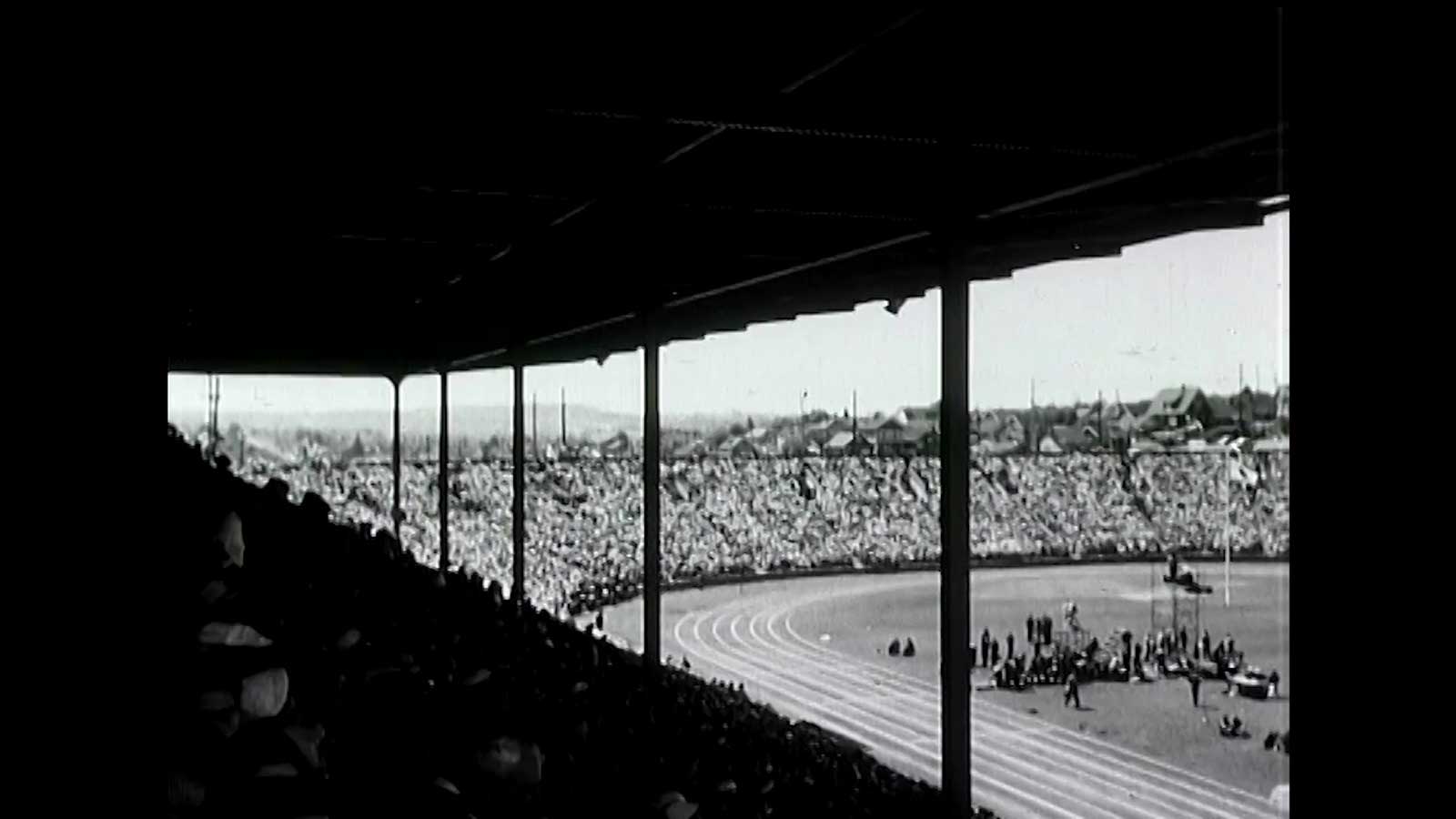 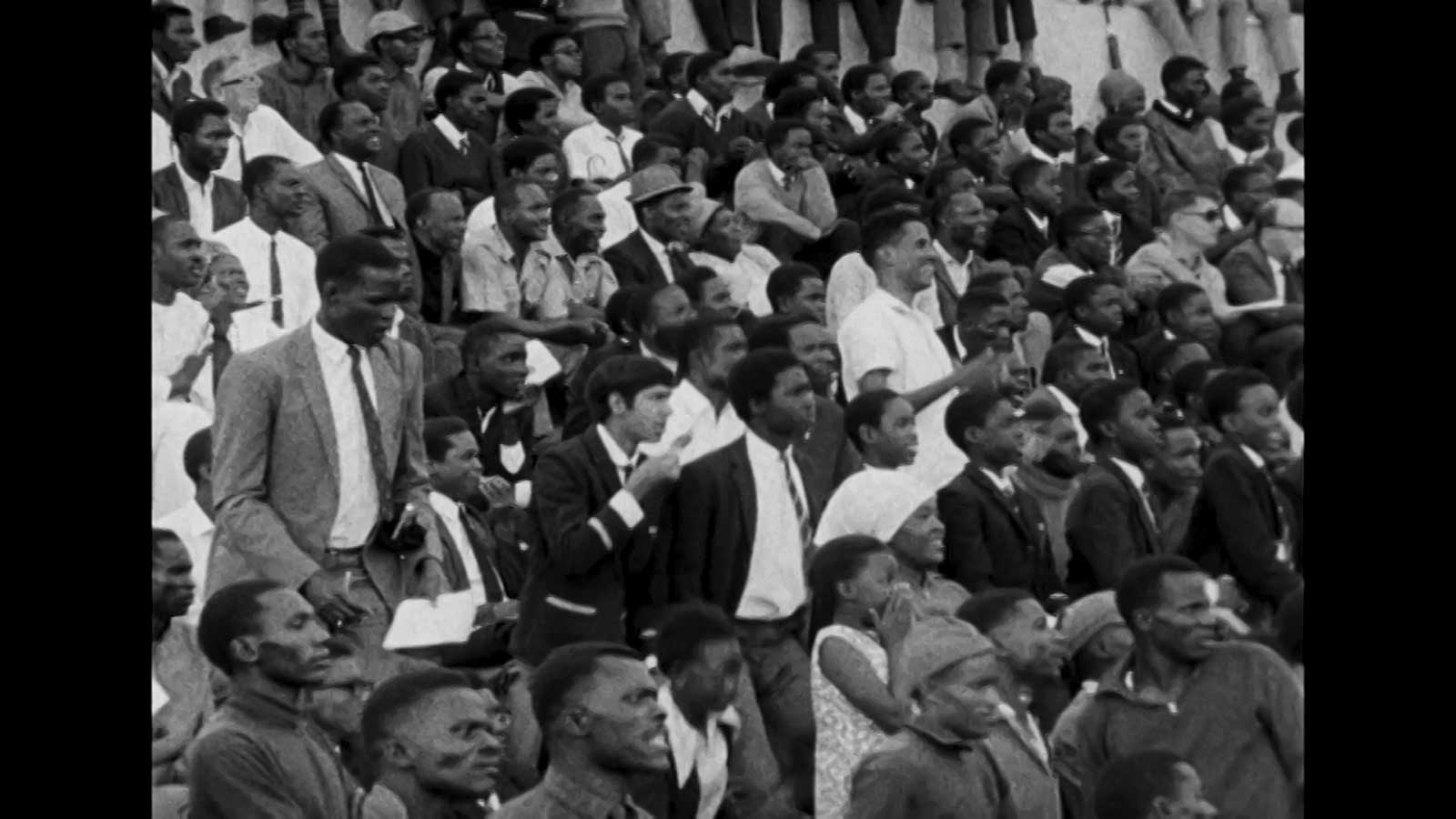 There are three versions of the street poster element of this work. One, a figurative depiction of a man vaulting the globe, appears at first to hark back to a triumphant yesteryear: a traditional celebration and commemoration of athletic achievement. But the fact that this poster’s masthead refers specifically to the ‘British Empire and Commonwealth Games’ poses issues. The words ‘and Commonwealth’ are significantly smaller than the rest of the text so, at a glance, the phrase ‘British Empire Games’ is foregrounded.

Nkosi will know that since the 1960s the Commonwealth has been trying to downplay its colonial origins and present itself as a forward-thinking association that promotes respect for racial equality as a condition of membership. The 1971 Singapore Declaration sought to go further and dedicated all members to the principles of world peace, liberty, human rights, equality and free trade. That said, in 2011 an advisory panel made 106 ‘urgent’ recommendations to tackle Commonwealth member states’ human rights abuses and other breaches of law. Two-thirds of the recommendations were subsequently ‘referred to study groups’, that is, kicked into the long grass. And to this day the Commonwealth’s commitment to enforce the standards which it purportedly upholds is open to question.

The leaping figure on this poster, its retro appeal, is further complicated when we realise that Nkosi has visually quoted the official poster from the 1938 Empire Games staged in Sydney. This third Empire Games was specifically timed to coincide with the 150-year anniversary of the foundation of British settlement in Australia. International sport is always a conduit for social, societal, and political concerns.

Two further street posters on display during Birmingham 2022 spell out, literally, Nkosi’s misgivings as to the Games’ historical and ongoing ethical matters of contention. The first presents binary oppositions between an imperial conception of the event versus a more ‘enlightened’ interpretation. So, EMPIRE is coupled with COMMONWEALTH; POSSESSION counters PARTNER; COLONY vies with FAMILY; RAID contrasts to TRADE; VIOLENT is set against VOLUNTARY and, finally, DEMISE is coupled with REPRISE. Despite the simplicity of the poster’s understated design – and the almost saccharine sweet pale pink and stone colour scheme – the message is stark: Have we shucked off the evil associated with the first word? Have we achieved the meritorious position suggested by the second? Are we changing realities or just using more reasonable language?

The third street poster continues with an understated colourway but is similarly confrontational in terms of language. A vertical list of dusty pink and white lettering on a stone hued ground reads: REINVENT, REST, REWRITE, RESIST, REMEMBER… And then the word EMPIREPARATIONS, whereby Nkosi perhaps addresses the heart of the matter. If historical and contemporary grievance had to be compensated with hard cash minds would be focussed. The list continues: RECOVER, REIMAGINE, REVOLT, REPAIR, RECIPROCITY… There is, it seems, a lot of work to do. 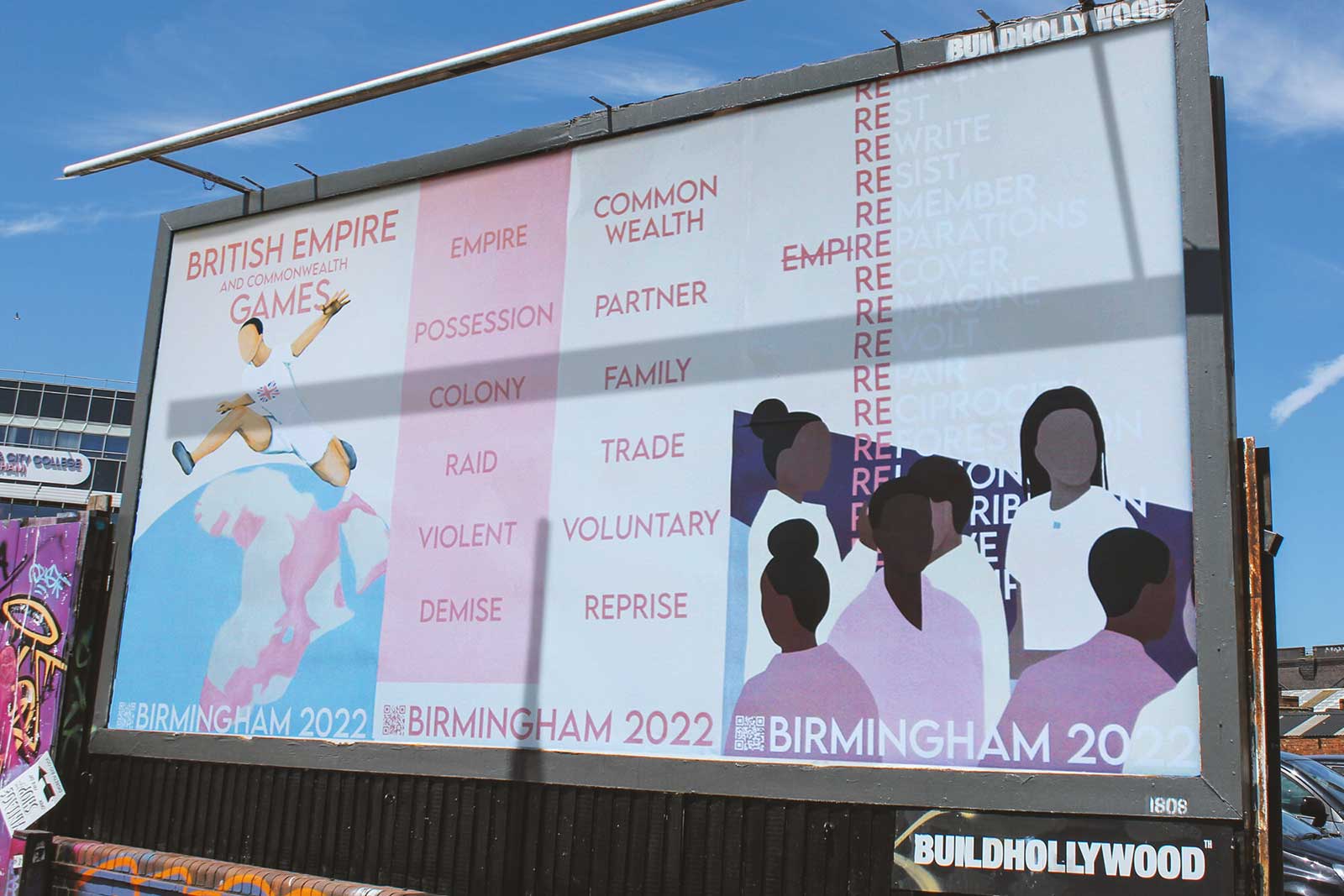 The issues raised are long overdue but still, Nkosi’s work is arguably a brave, certainly a timely commission on the part of Birmingham 2022. The artist is visualising and explicating the many ways in which traditionally the Games have perpetuated, even promoted inequality and exploitation as well as how we hold athletes to different standards depending on their gender and race. Post the quickening of the Black Lives Matter campaign (the refreshed anguish, anger and action following George Floyd’s murder) and Simone Biles’ recent questioning of expectations about what she should and shouldn’t do – bravely standing up to sport authorities and an often-spiteful media – maybe real change is occurring. Nkosi’s significant, multi-faceted art practice stands as riposte, conscience and beacon to the Games in Birmingham 2022, shining a light on historical failings and illuminating future scope for positive change. This is pertinent and important art for our times.

Finally, on being asked what it means to see her work displayed across Brum, Nkosi explained, ‘To be able to show my work on the streets of Birmingham feels like an important opportunity. I am interested in the idea of art creating a connection between people and experiences. This particular work engages with colonialism, resistance, and the framing and reframing of history. Learning about Birmingham’s importance in sustaining the British empire, and thinking about my home city, Johannesburg, and its place at the heart of South Africa’s colonial mining industry, one starts to see how extensive the colonial project was, how long-lasting its effects have been, and what our cities’ people may have in common. I am gratified to be in a position to share my own perspective, on the other side of the world, with people whose lives and histories have also been affected by colonialism.’ 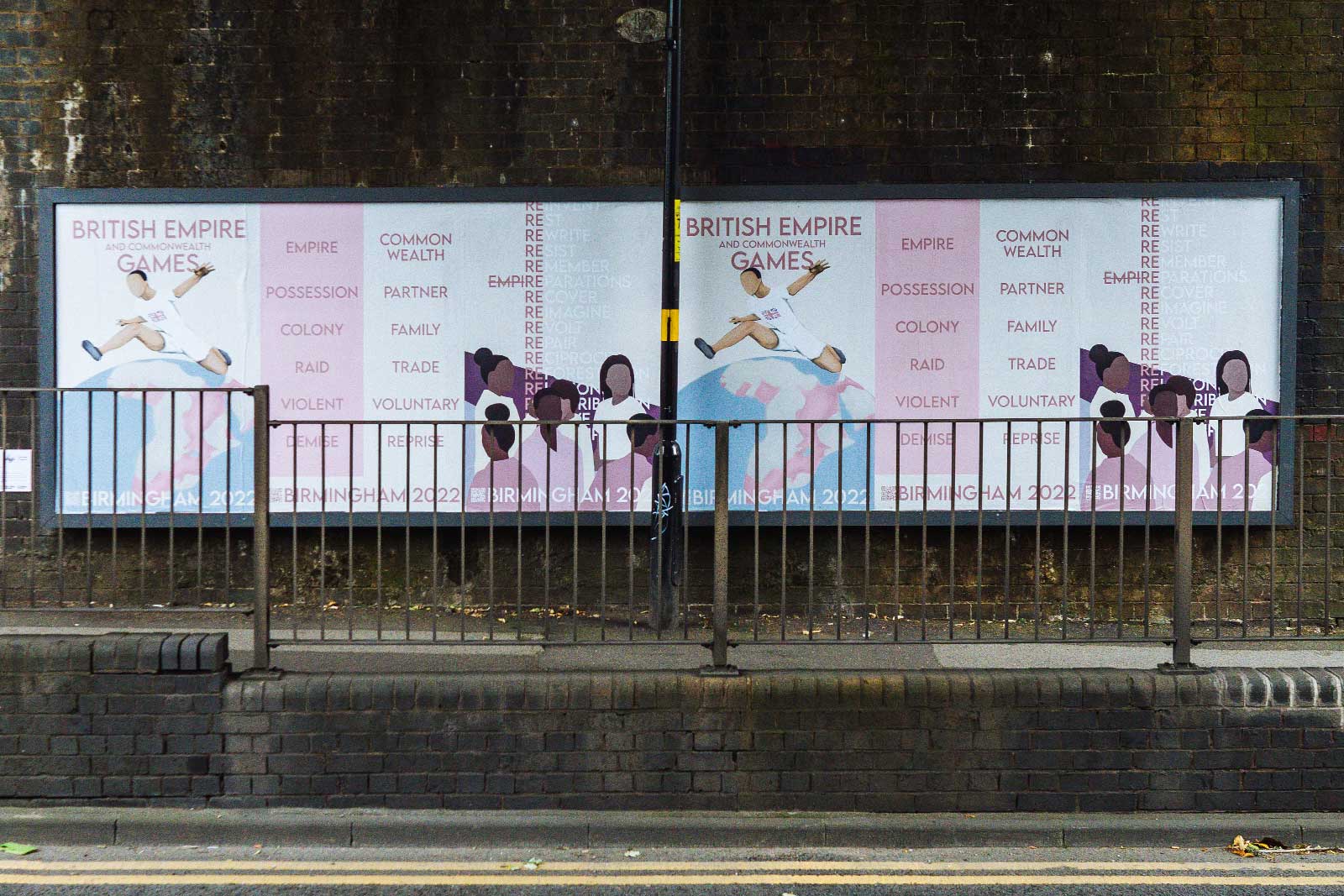 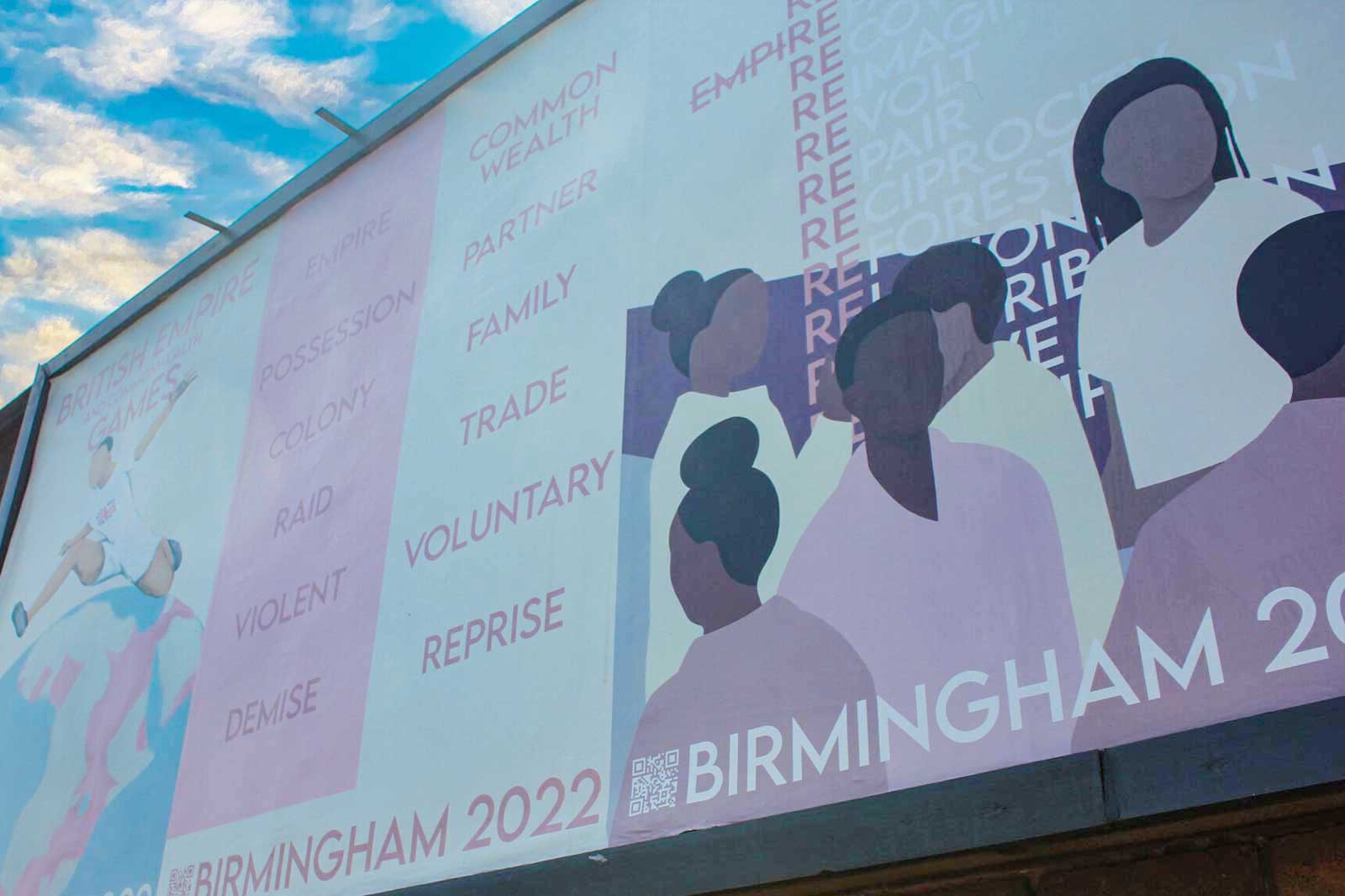 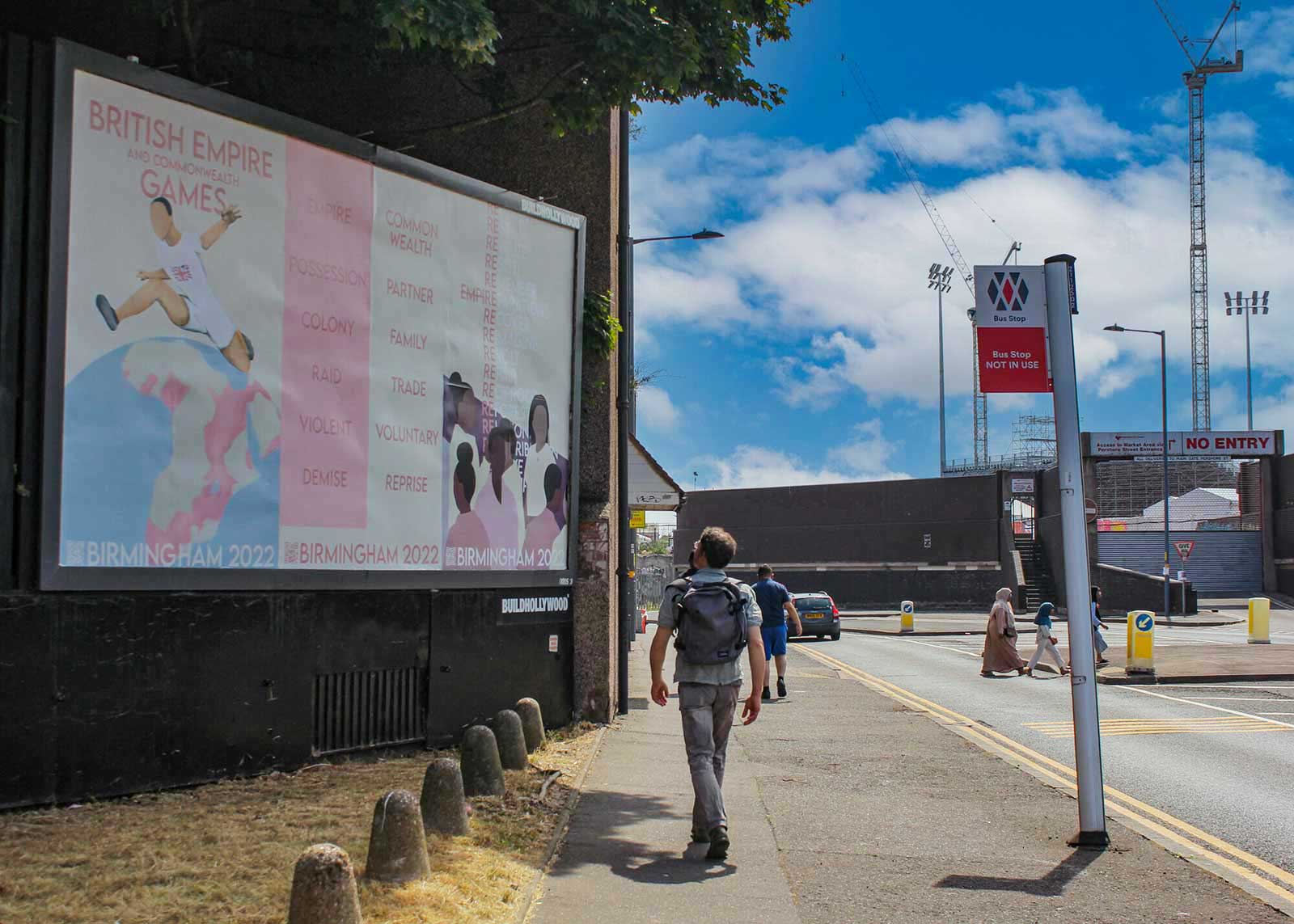 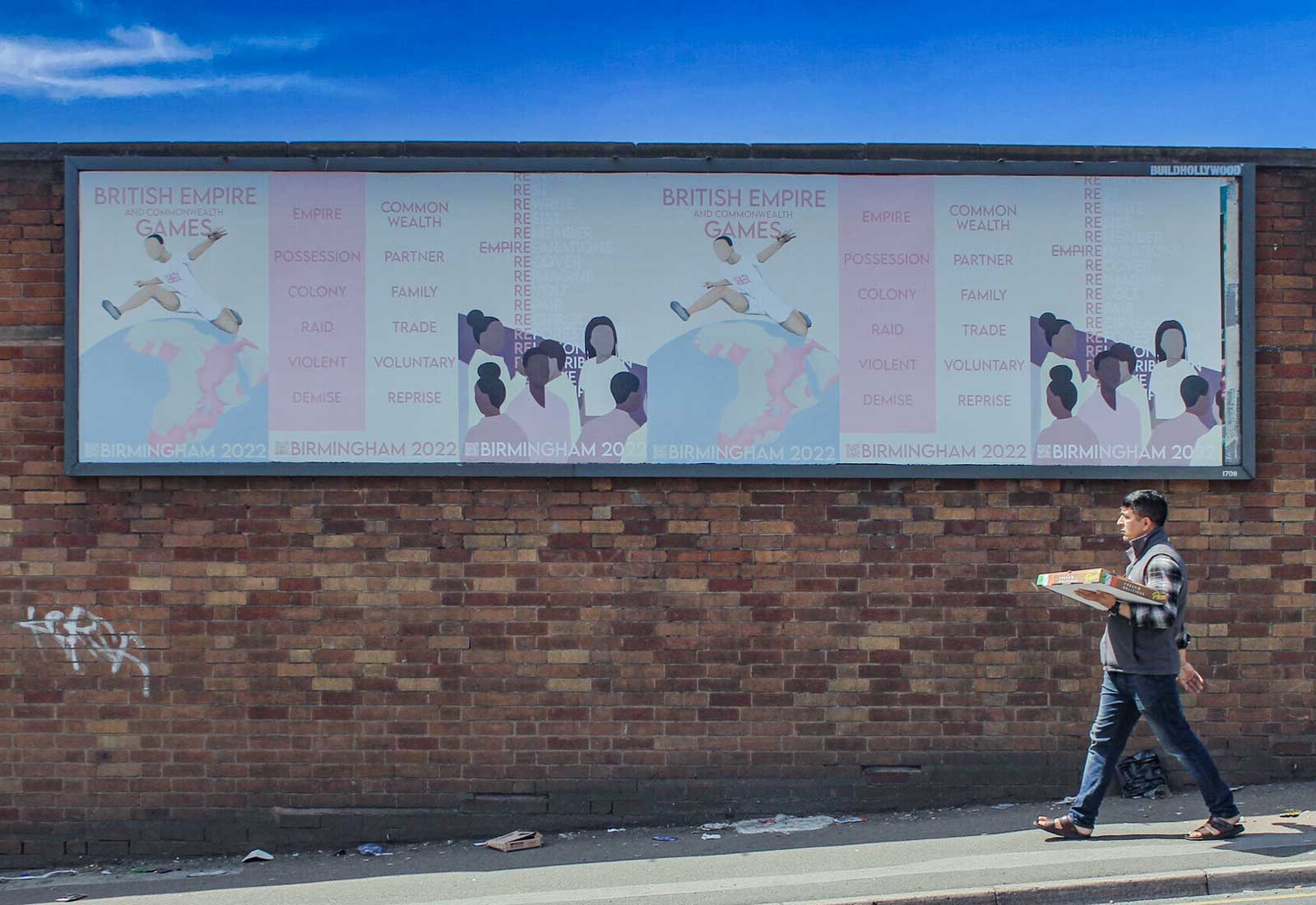 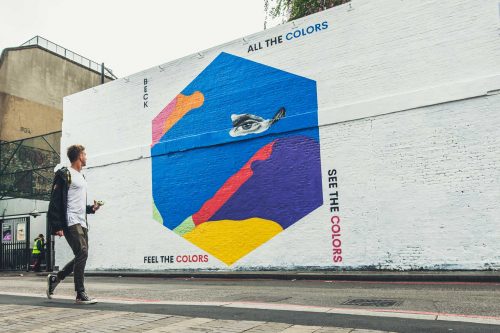