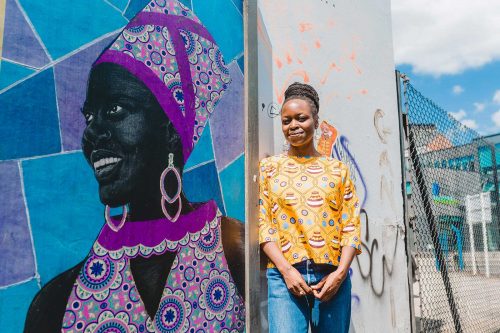 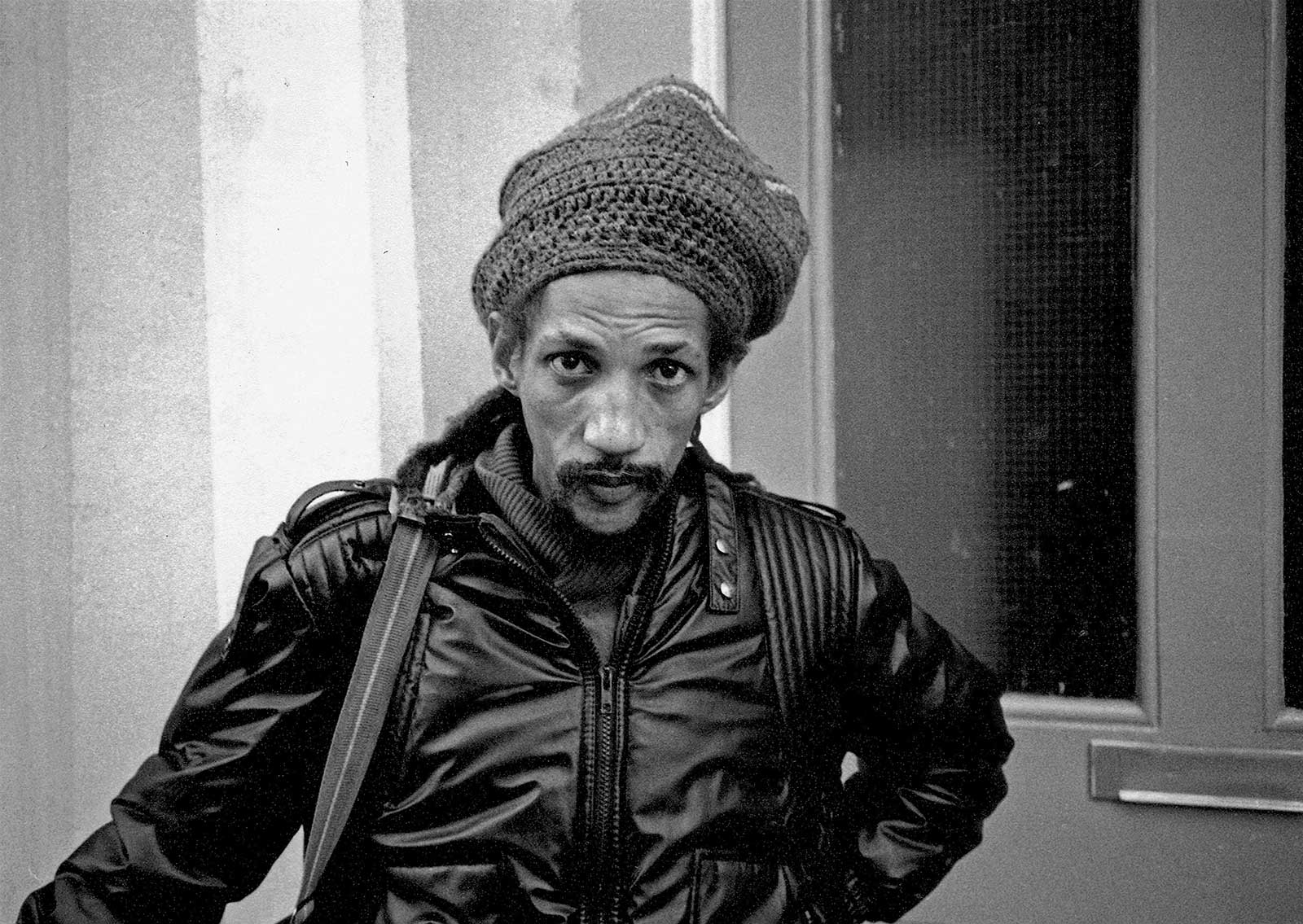 Conceptual artist Pogus Caesar was born in St Kitts, West Indies and grew up in Birmingham, England. While beginning his career as a pointillist painter, the purchase of a 35mm camera in the 80s changed Caesar’s life. Indeed, it’s the very same camera that he works on to this day.

Caesar has documented prominent figures in the music industry alongside key historical events including the Handsworth Riots in 1985. He often reworks 35mm negatives into new forms, challenging the notion of religion, sex, history and identity from a Black British perspective.

As a music fan and scholar, Caesar was thrilled when he got the opportunity to be able to document some of his musical icons from the 80s onwards. Over the years, these photographs formed his ‘Muzik Kinda Sweet’ project, where Caesar takes globally renowned artists and captures them in everyday situations.

“When I took these images, it was about trying to photograph the artists outside the context of their stardom,” Caesar says of the street locations where he took many of his photos. “A lot of images and portraits of musicians are usually very shiny and staged. I wanted the opposite of that…I wanted to capture them in a natural setting to illustrate that. It was always important for me to show they’re just ordinary people who do extraordinary things.”

Caesar’s work has been exhibited widely and is acclaimed for documenting Black British history from the street. In 2004, he established OOM Gallery Archive in Birmingham, which represents his photographic archive worldwide.

Caesar spoke to us to reflect on his career, what it’s like taking an image of a musician in an ordinary setting like the street and what he hopes the public will take from the project. 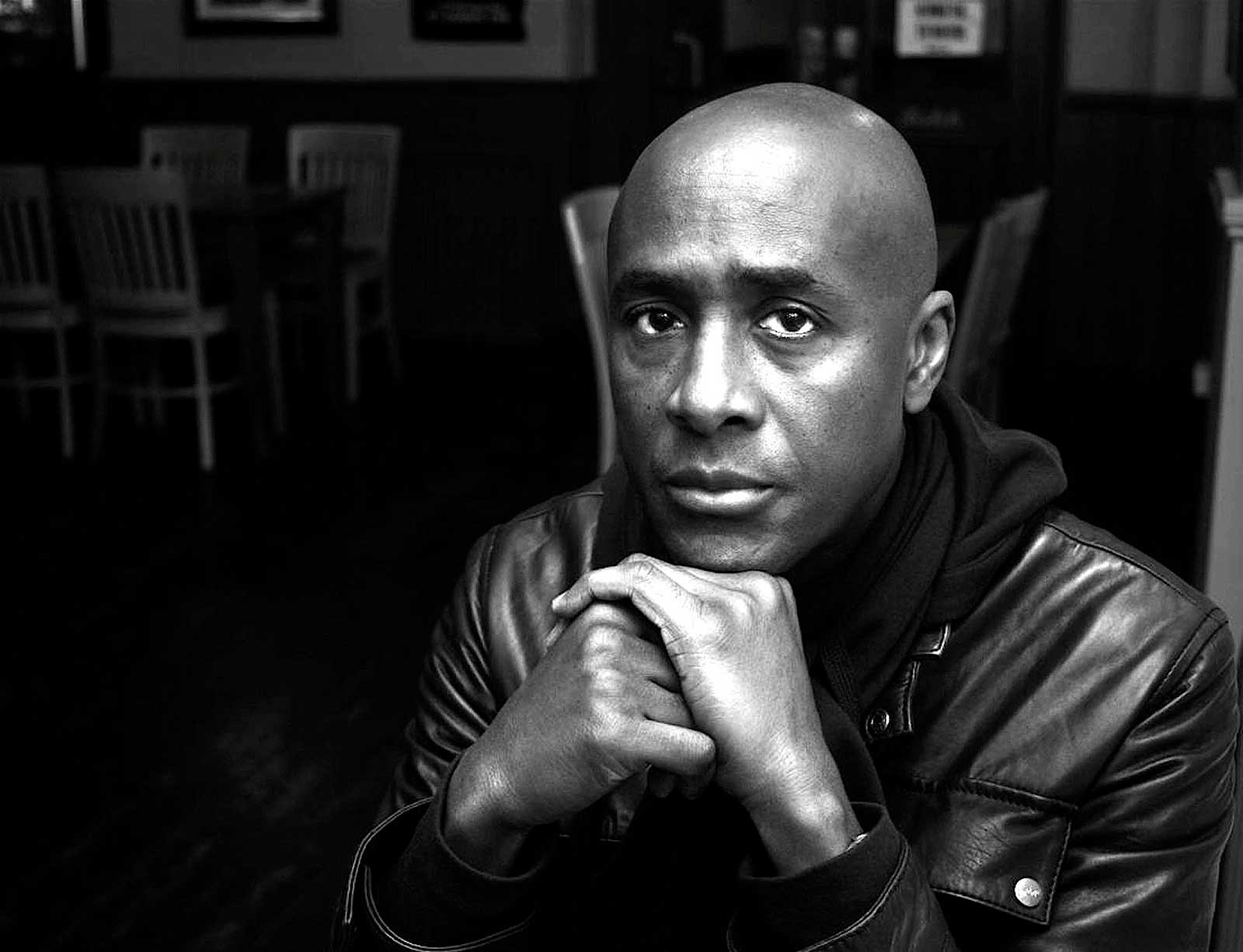 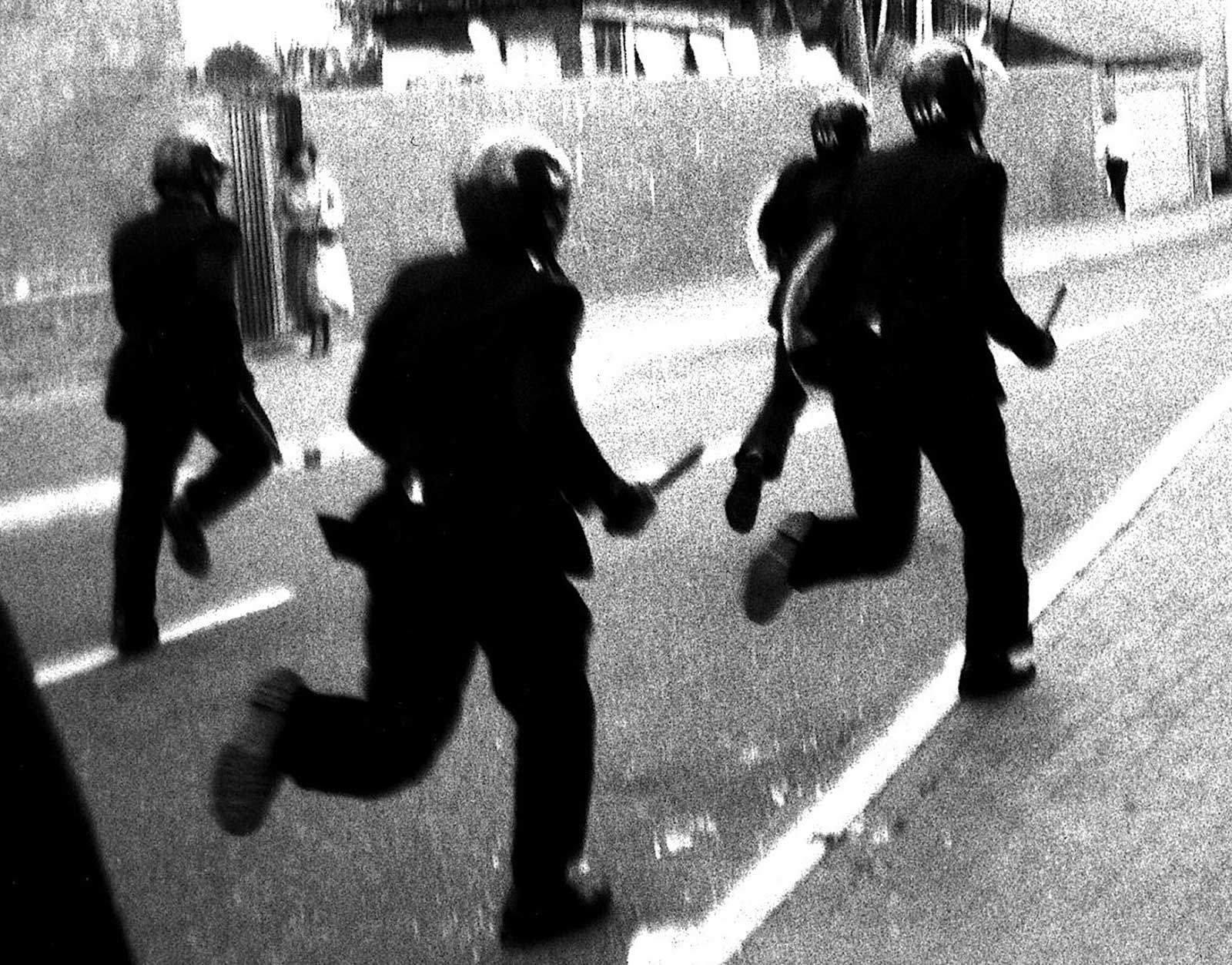 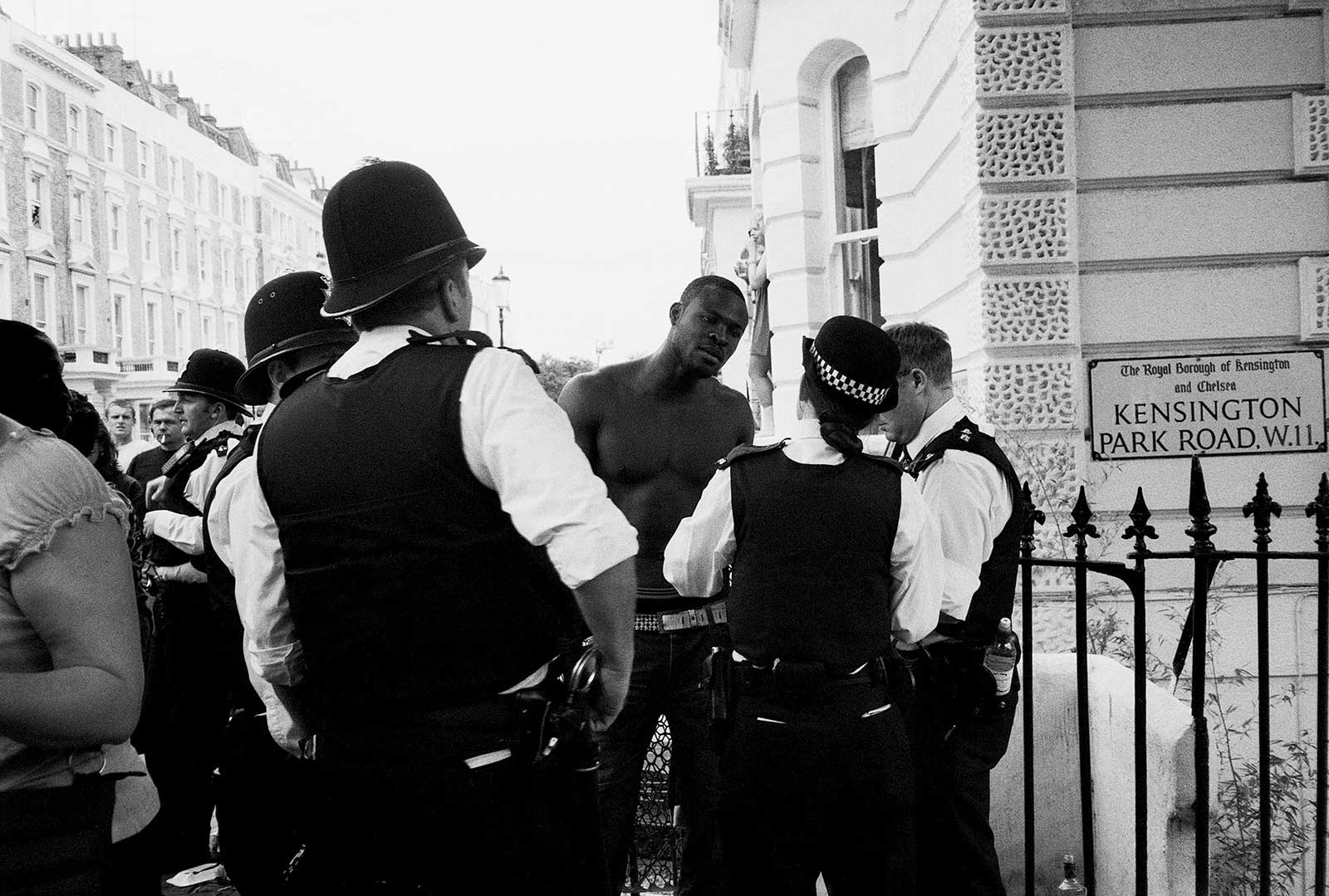 What did you hope to capture in this collection of images?

“When I took these images, it was about trying to photograph the artists outside the context of their stardom. A lot of images and portraits of musicians are usually very shiny and staged. I wanted the opposite of that. I’ve always used black and white, 35mm film because I liked the grainy roughness of these shots and the honesty they bring. The people in these images, their music transcends all cultures. It united us all. I wanted to capture them in a natural setting to illustrate that. It was always important for me to show they’re just ordinary people who do extraordinary things.

“At the time, I was also used to seeing of a lot of reggae artists whose photographs were taken mainly in Jamaica and they usually posed while smoking. I wanted to photograph them out of that context, getting them into an un-stereotypical setting. To take them out of that, it has to be a safe environment where the subject trusts you too. That’s the main thing, trust.”

How do you gain that trust with artists?

“I think it’s just all about listening. The main thing is to listen to the artist and also, because I’m a great music lover, it’s studying their liner notes, knowing their lyrics, the way they construct songs, the range of music they’ve released. With Augustus Pablo, I remember meeting him in Ladbroke Grove, London. We went into this little café for about half-an-hour, and we just talked. He was a great idol of mine: I thought of him as the George Martin of reggae music. I photographed him in the most ordinary setting imaginable: in front of a doorway. That’s the wrong context in which many will know him, but it’s actually the right context, because it showed that he’s just an ordinary human being with the ability to make extraordinary music.” 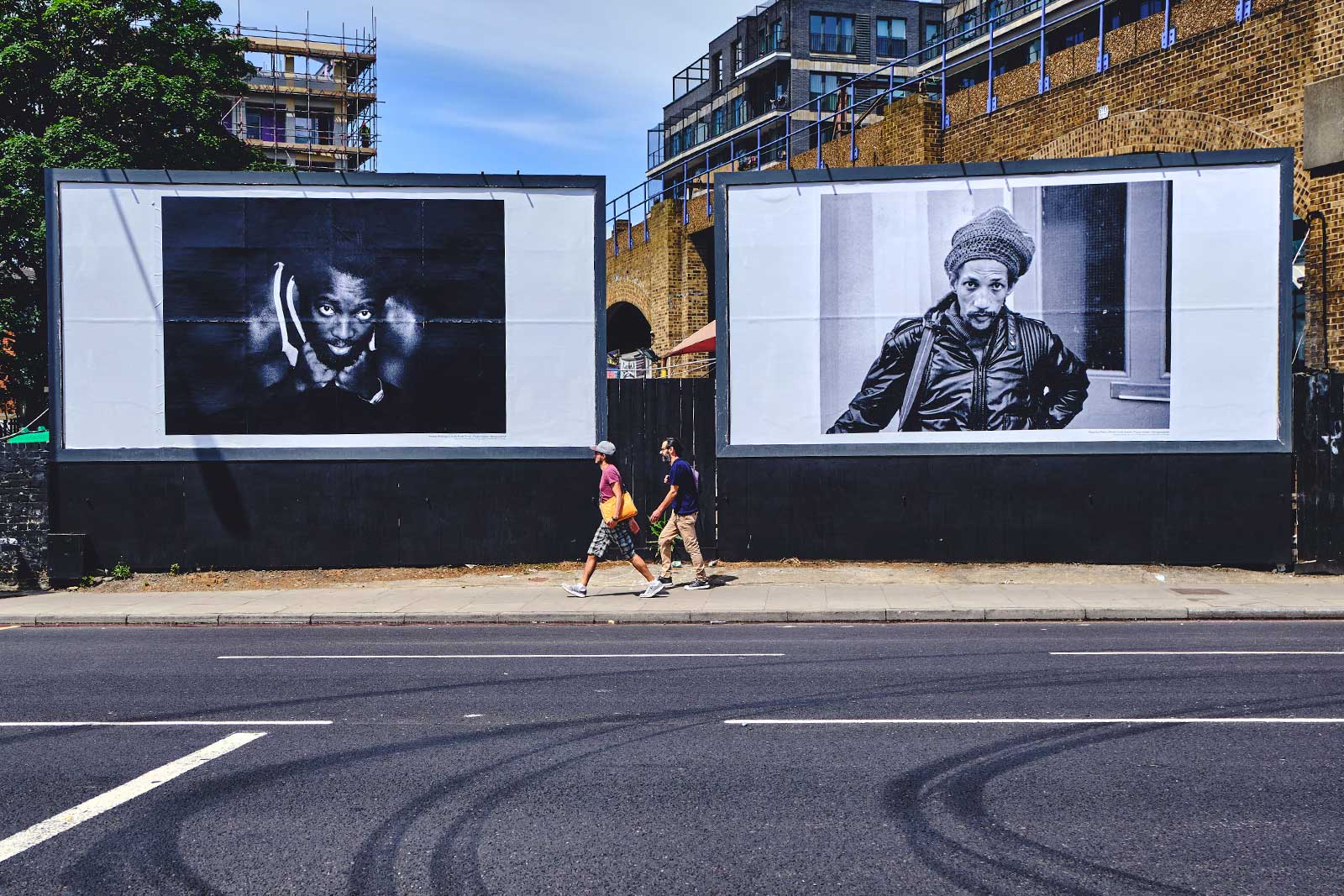 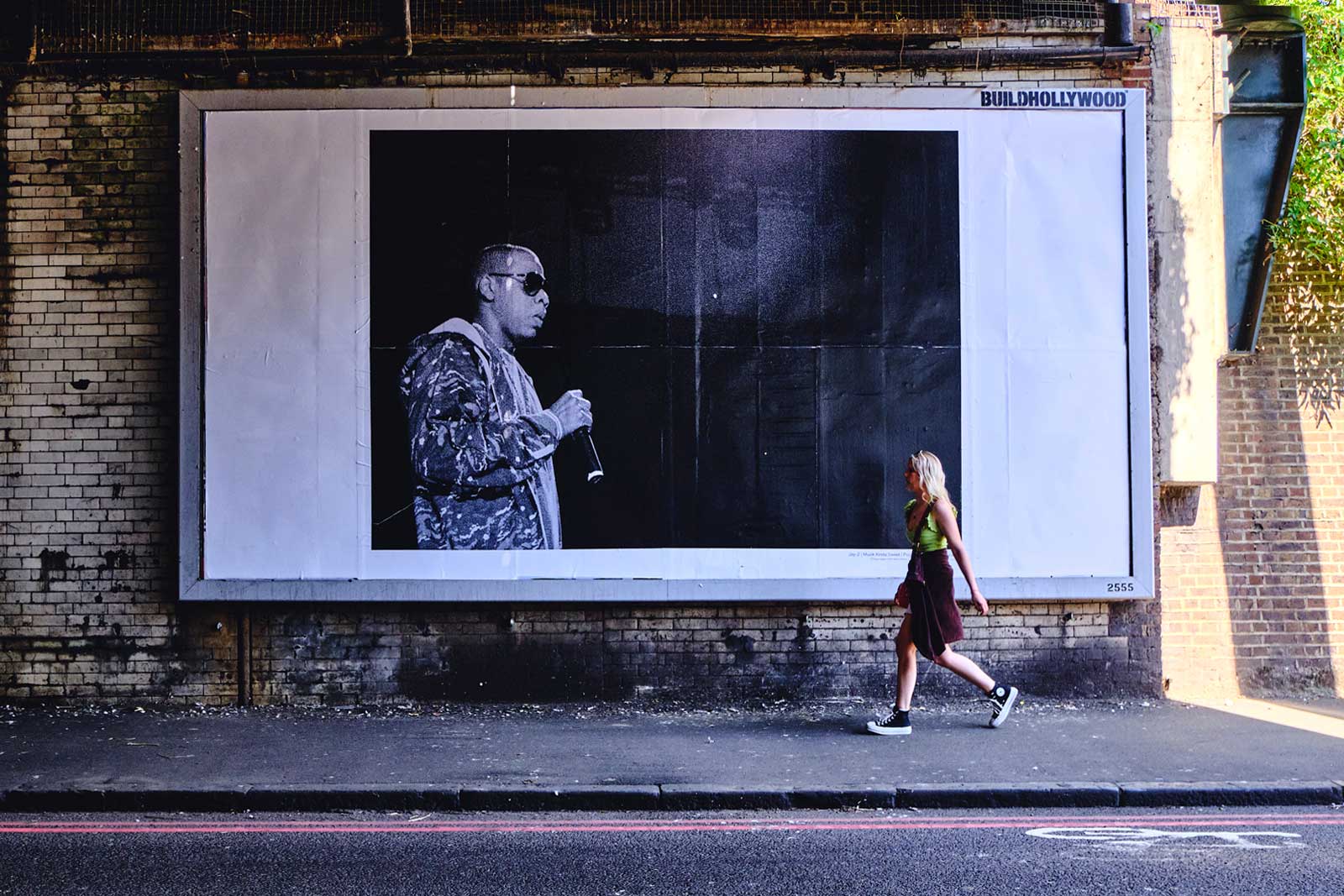 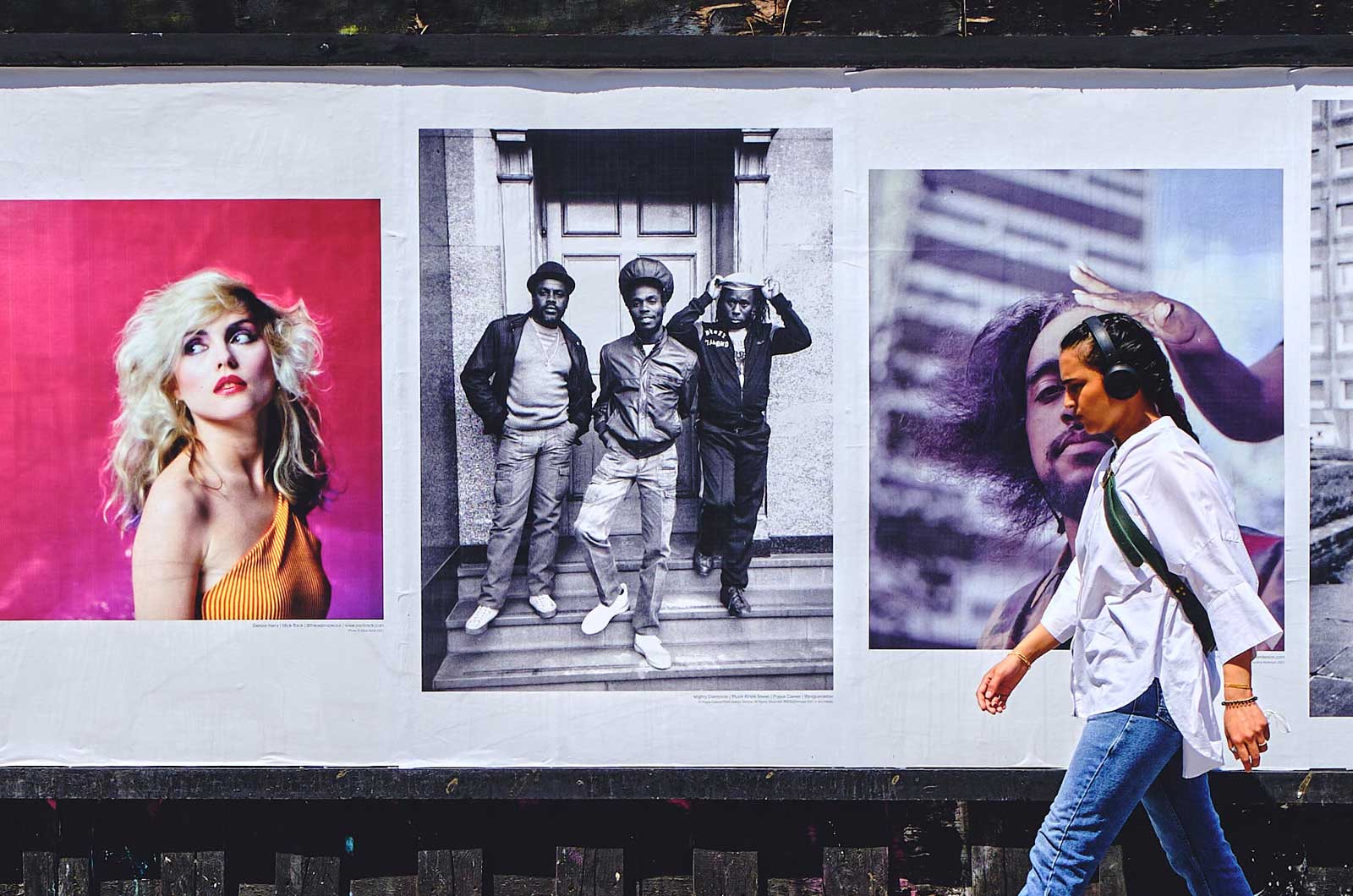 What do you want passers-by to take from your billboard images?

“To look beyond but also to seek and find out much more about the individuals. If you say to a passer-by ‘Augustus Pablo’ they may say ‘Who is this person?’ I’d love them to research, go to the Internet and spark their curiosity. I’d like people to go beyond the shininess of the bigger artists in the shots, go beyond all the things that you think you know. Dudley born Dee Johnson, ended up touring the world as a vocalist with Simply Red” what is it like to be in a band that have sold 50 million albums?”

You’ve included two incredible live shots of Jay-Z and Grace Jones: what are your memories of taking these photos?

“Jay-Z was just at the side of the stage when I took that photograph. He has this stillness when he performs, he doesn’t jump around. How do you capture his concentration, his brain working, the verbal gymnastics that alight from his flow? I had seconds to document his essence before he was bathed in lights, I’d like to think that I did.”

“With Grace Jones that was the opening of her Hurricane tour in Birmingham, for some reason, she connected with my lens. She got on the top of this guy’s shoulders and stared straight at me. Everybody has camera phones and they’re taking photos of this moment: my equipment is a small 35mm auto focus Canon. She found her way towards me, looked down the barrel of my lens and ‘click!’ Grace Jones gave me one of the best photographs I’ve ever taken.” 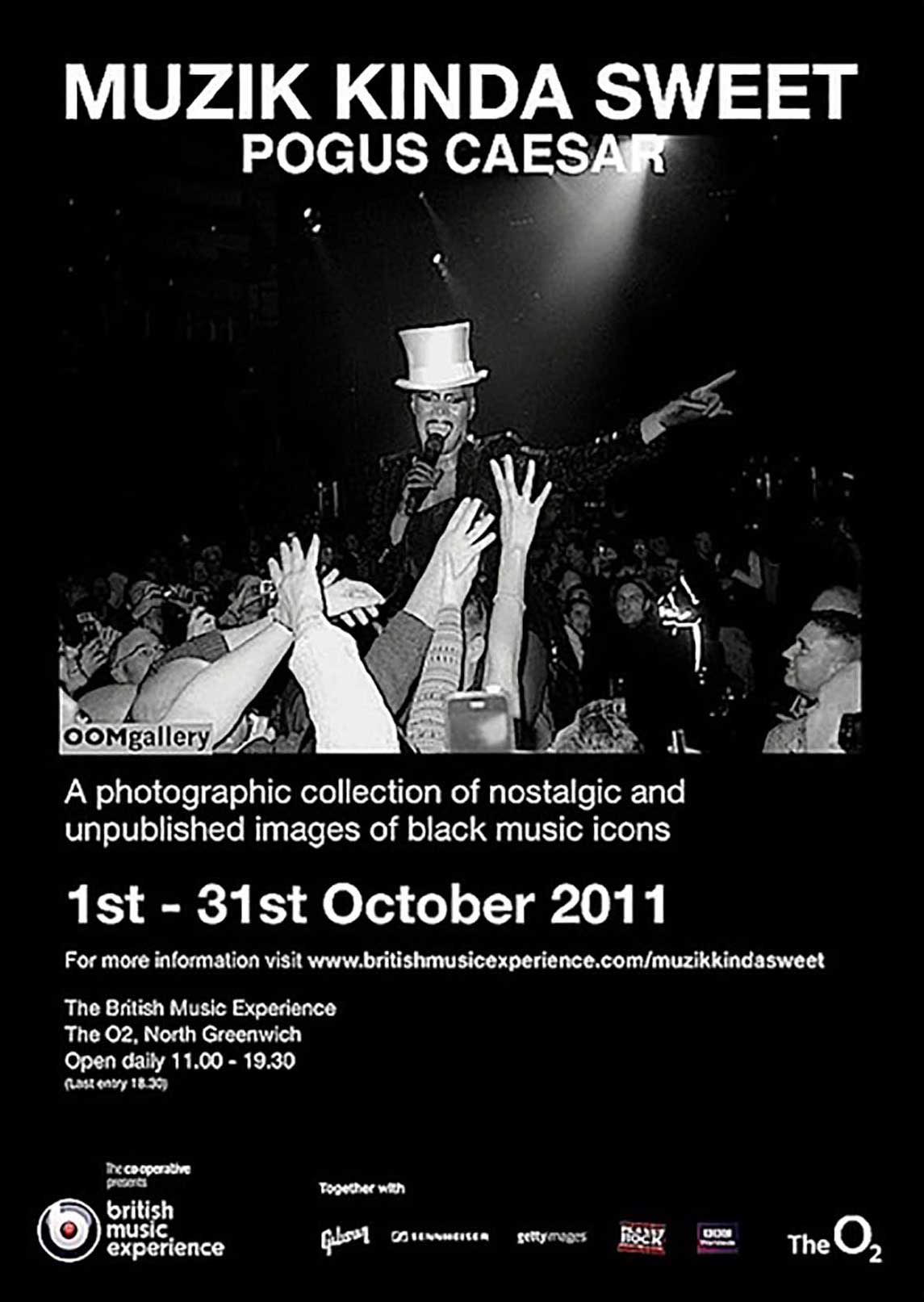 Why do you think it is important that people are reminded of music at this time with a campaign like this?

“We’re in very dark days at the moment with the pandemic and world politics. For me, music is a thing that uplifts me. This morning, I was listening to Nirvana, Santana and Pete Rock. An eclectic mix on unconnected music that evokes different moods. That’s inspiring, and of course music inspires people, irrespective or race, creed or colour. It cuts a path right through it, and at this moment in time we need to be reminded of that more than ever.” 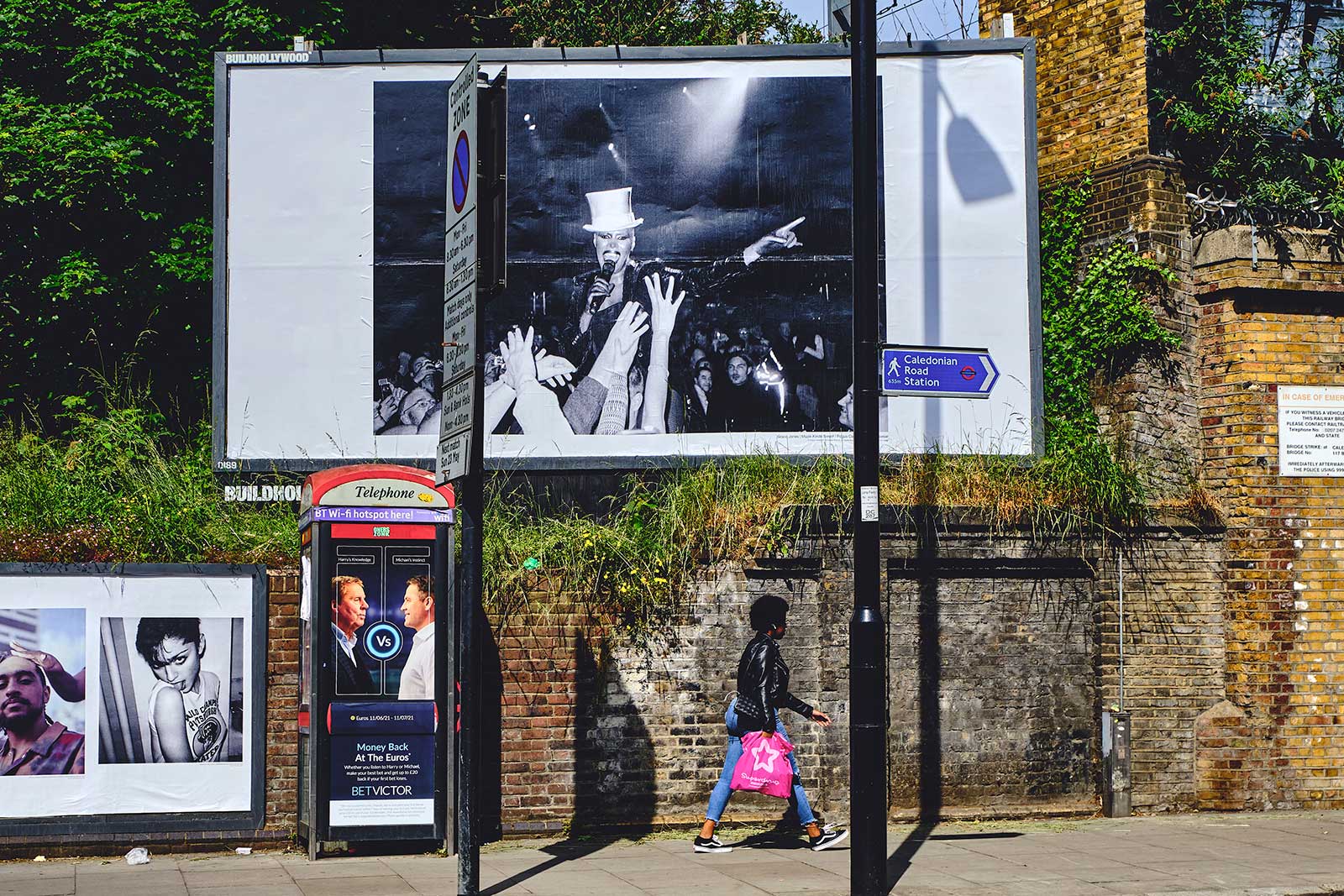 You still use the 35mm camera purchased in the 1980s, does that bring a lot of pressure as you only have a limited number of shots available?

“It’s really defined by the situation that you find yourself in. As I’m shooting on film, there are only 36 frames. I can’t review the image because it’s not digital, so I have to really focus on getting the right shot, considering the lighting conditions and much more. I suppose to an extent it’s feeling the whole vibration, whether it be a stadium or a small environment, you have find the moment because you’ll never have the opportunity again. Having a limited number of frames makes you focus on what is required. I tend to use 400asa film; one of the tricks of using 35mm film is taking the asa up or down to get different kinds of grain. In a way, your cerebrum is utilising digital methods but working with 35mm film.”

Was there a particular photographer who inspired you?

“People like Gordon Parks, Henri Cartier-Bresson and also Diane Arbus especially. I was searching for records in Greenwich Village, New York in the early 1980s and I came across a book by Diane Arbus. As I flicked through the pages, it was the most-grainiest imagery that I’d ever seen. I realised then it wasn’t about the quality of a photo, it was about the content. Up until then, I’d always been driven by having perfect photographs. I would see a lot of photographers, they always had bags of Nikons and Pentaxes, various lenses, light meters, flashes. I was intimidated, I have to say, by all of that!” I had to find a camera that suited my personality, purchasing the Canon AF did that and also gave me a visual voice.” 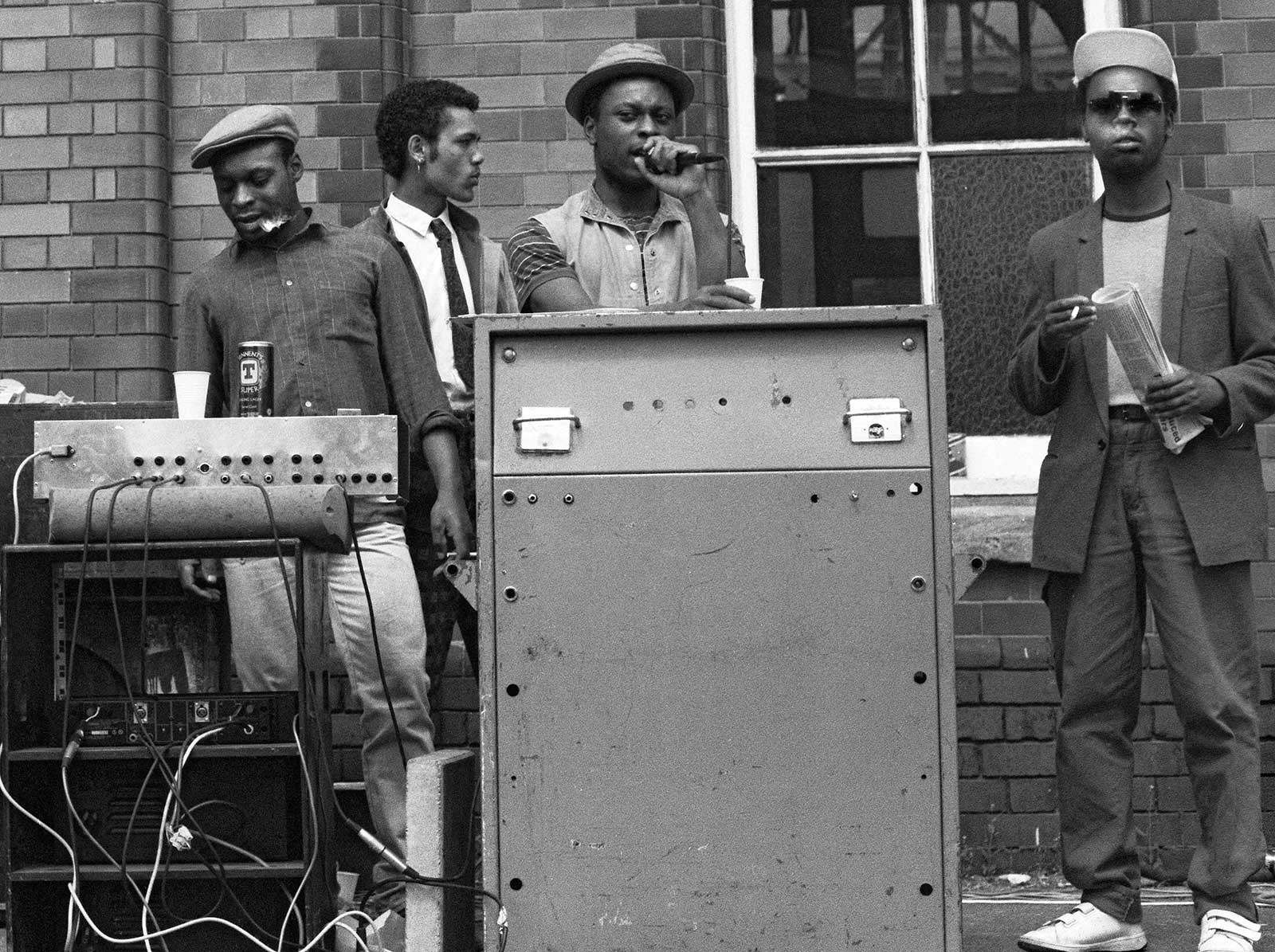 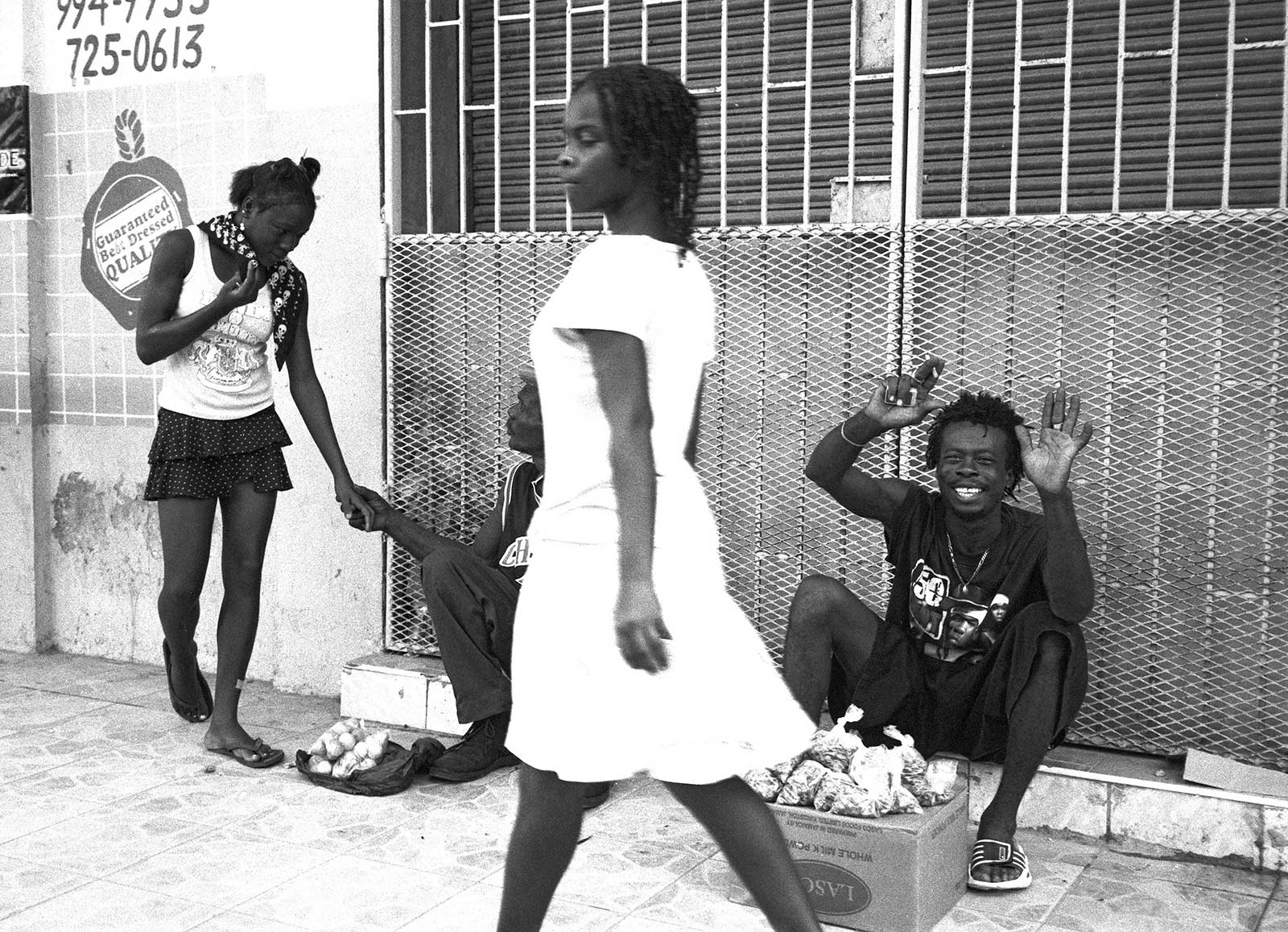 Why is it important for you that these pictures are in the community as opposed to an exhibition in a gallery?

“I took these pictures on a very old camera which is held together by a little bit of tape because the battery keeps falling out. It’s travelled everywhere with me from Albania, South America to Scandinavia, South Africa, America, all through Europe. We have to do the best with what we have. Creativity will never go away and even at a time when the government is reducing funds in arts education, we can still create and capture images. Whether it be a £10 camera from a charity shop or a phone, we can take it and upload the images for the world to see. That’s a very important message about art: keep sharing!

“With this project, we’re able to display our photos and take over the streets in London, Birmingham, Glasgow, Edinburgh, Bristol, Cardiff – it’s important to remember, not everyone is comfortable in a gallery or museum setting. These icons are on billboards towering over us, demanding eye contact, some welcoming new listeners. Everyone can be inspired by them – and we can create images like this too, because no matter what moves you, the ‘Muzik Kinda Sweet!’” 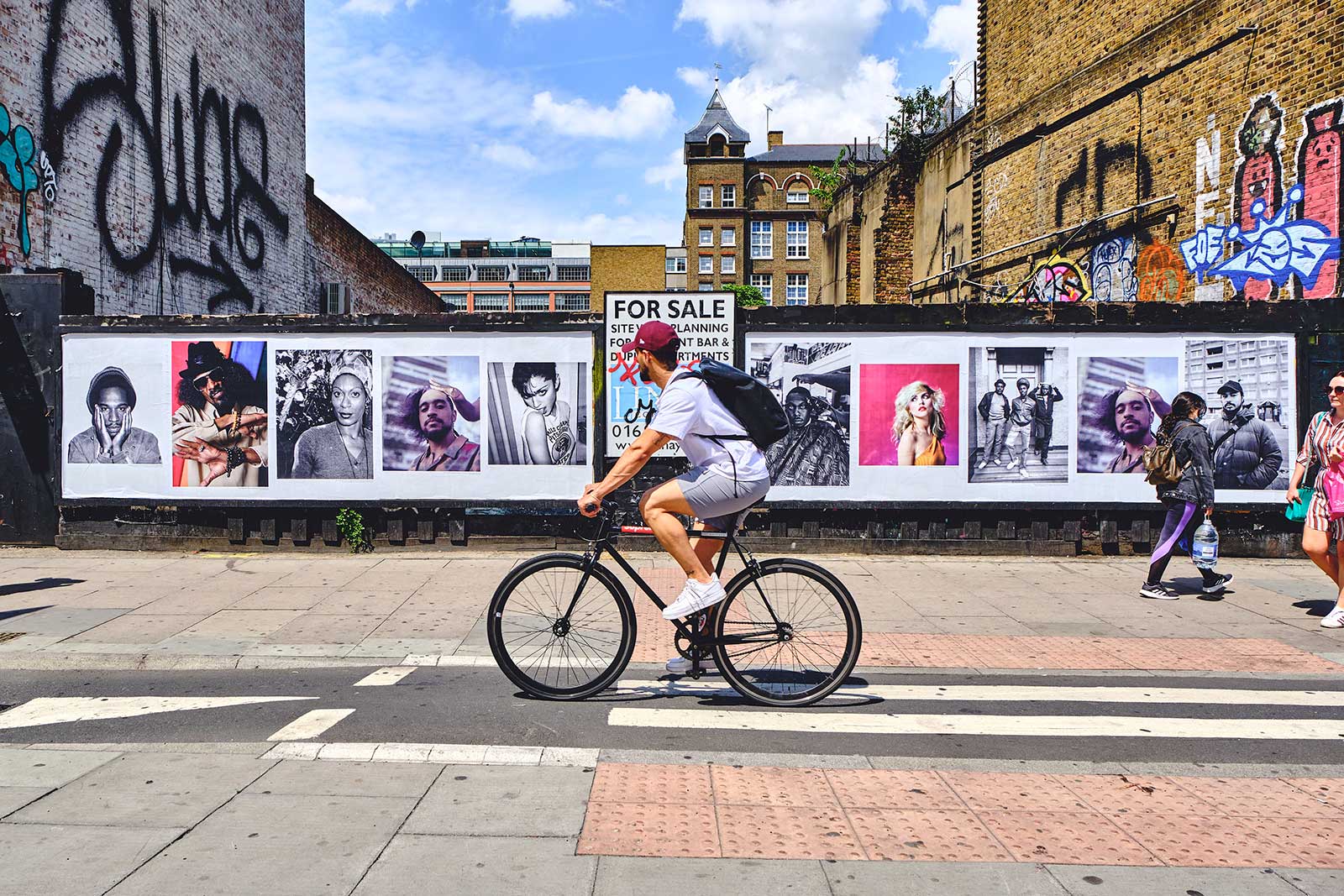 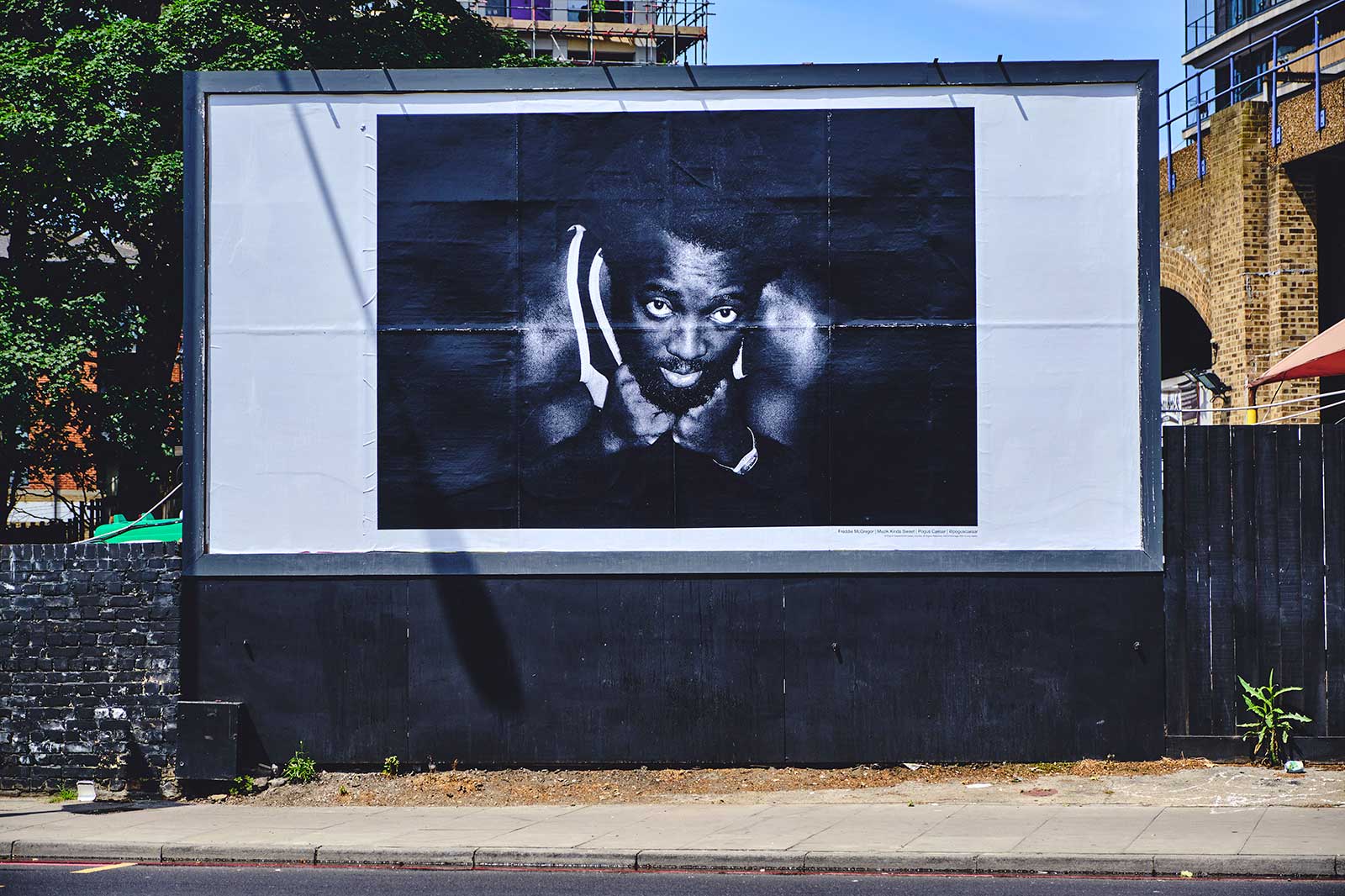 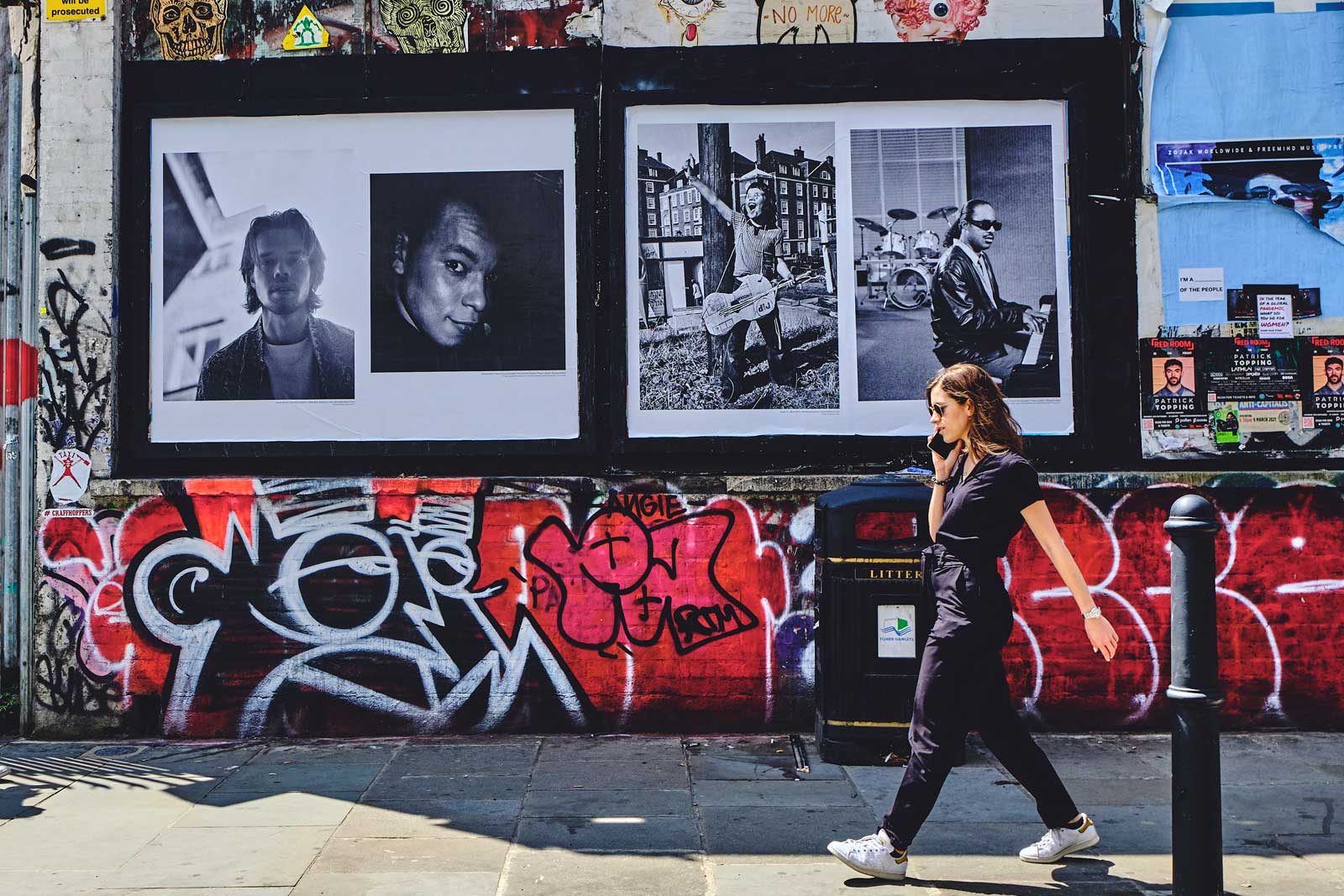 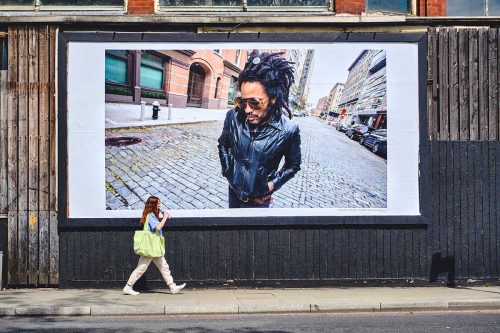