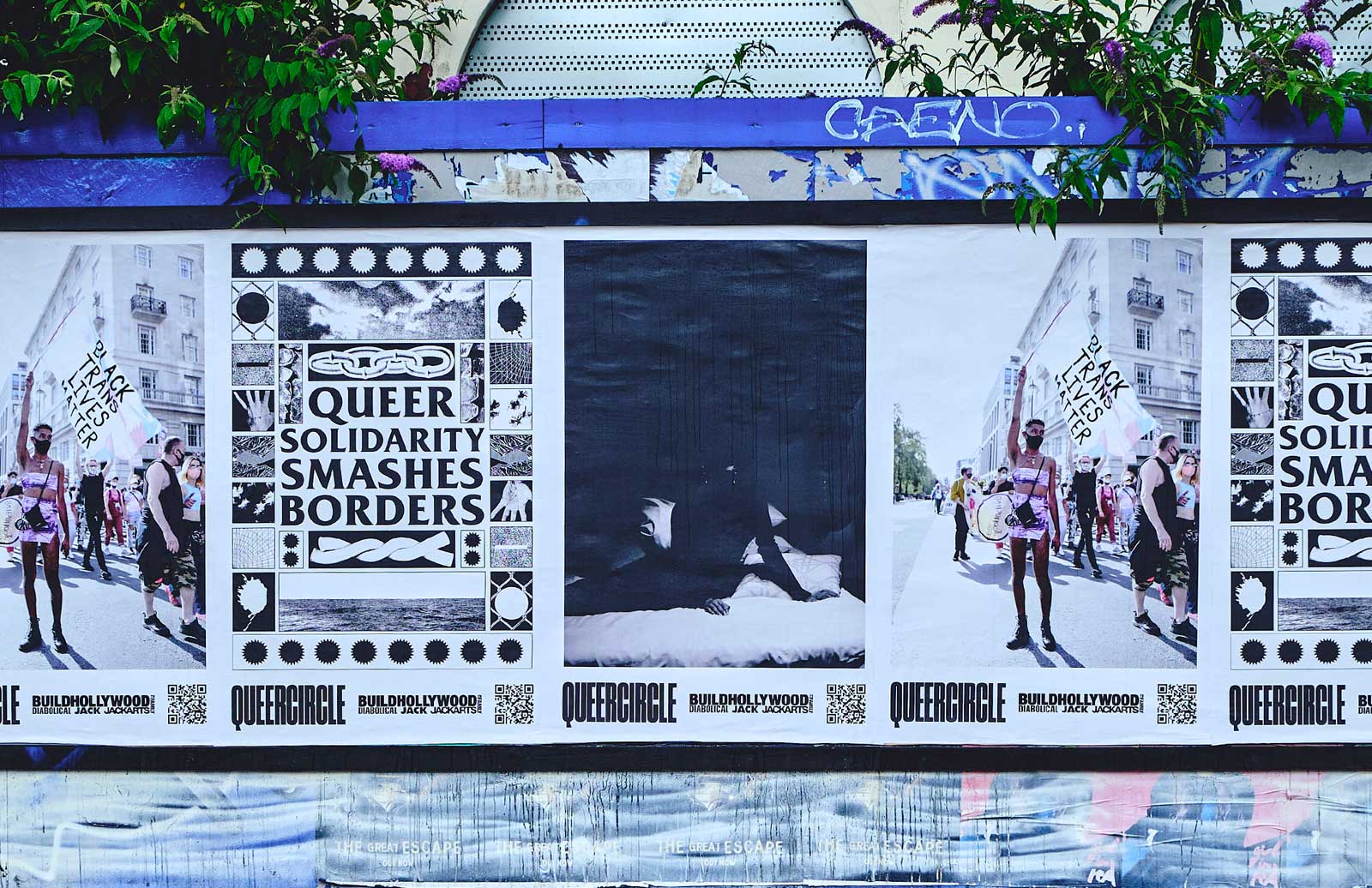 Art and calls for social change occupy the streets with Queercircle

This year, to bring in Pride month, we launched an open call with LGBTQ+-led charity Queercircle, seeking inspirational art created around Bell Hooks’ stirring words, “There can be no love without justice.”

Representing the charity’s broader aims of inspiring social change and bringing together the arts and culture, the call out came as part of a project to provide space for queer and trans artists on the streets. The chosen artwork has been displayed on sites in London, Birmingham, Edinburgh, Glasgow, Sheffield and Cardiff. Alongside the artwork, the street posters were designed to include QR codes linking to activation pages for each artist, introducing calls to action in support of causes close to their hearts – firmly linking inspiring art with social justice.

Providing the space for LGBTQ+ artists to occupy the streets can help to empower the communities the artists represent. Beyond that, it’s also an opportunity to inspire direct action that prioritises the needs of marginalised people, works towards equality, and aims to eradicate discrimination and prejudice.

Queercircle’s founder, Ashley Joiner, says of the open call, “Occupying and taking back public space is a crucial and empowering tool in instigating positive change. Through their artworks and the campaigns they’ve chosen to support… [the artists] are advocating for social justice and calling on the public to action transformative change.”

Bex Wade is a London-based documentary photographer, who captures protests, Pride, expressions of otherness and outrage, and moments of solidarity. Kgotlelelo Bradley Sekiti is a South African multidisciplinary artist, reflecting explorations of queer identities through self-portraiture, text and video. Black Lodge Press is a North Yorkshire-based print and micropublishing platform with radical roots, inspired by punk culture and anarchism.

The chosen artists’ pieces covered a spread of different formats and when sat side by side, create a beautiful, impactful, defiant street gallery accessible to all, uplifting LGBTQ+ visibility in cities beyond Pride month. As Bex Wade has noted, “Visibility does not equate to security” – so the activation pages and advocations for important social justice causes that accompany the artwork are intrinsically linked to each artists’ practice, and unify the project’s aims. 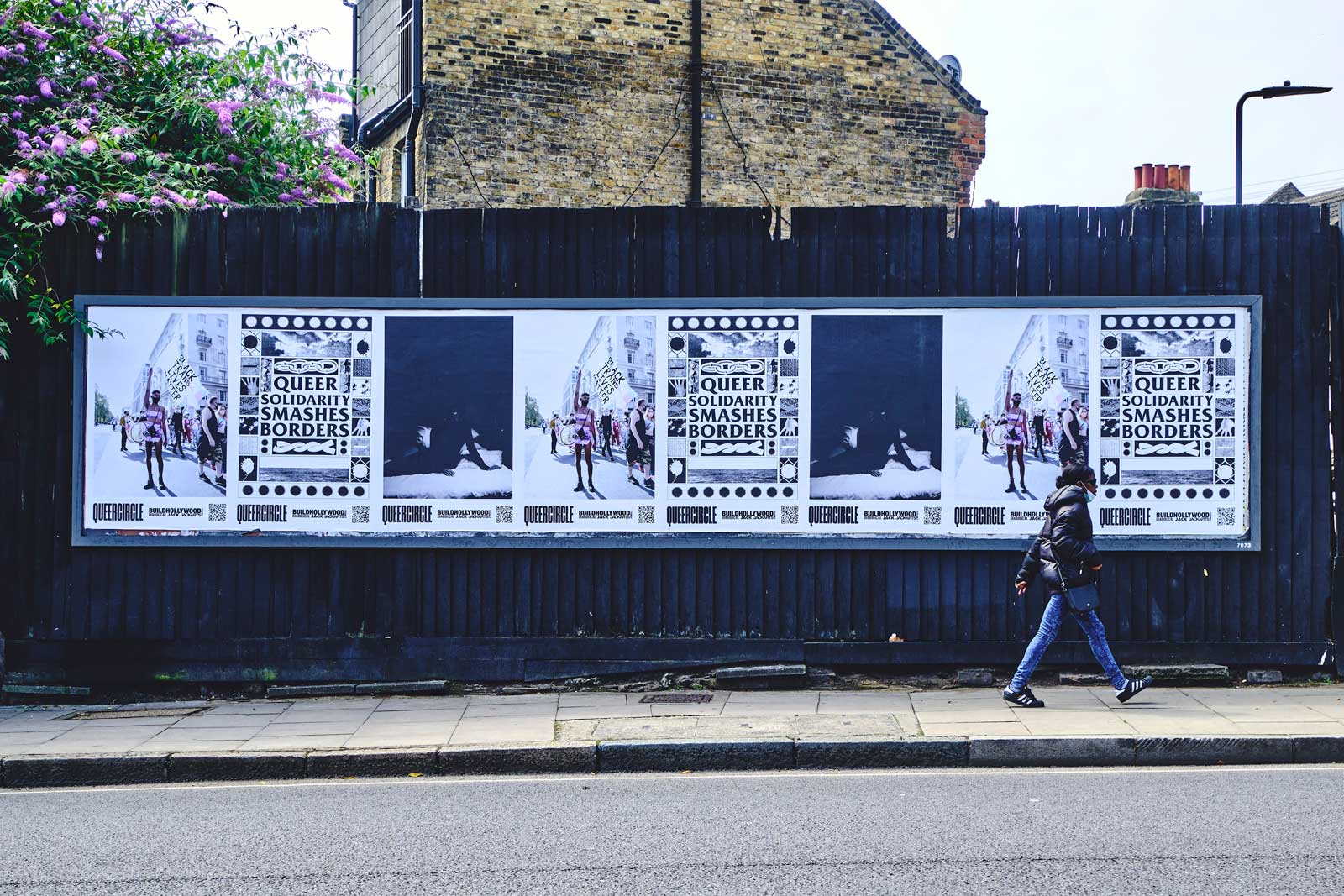 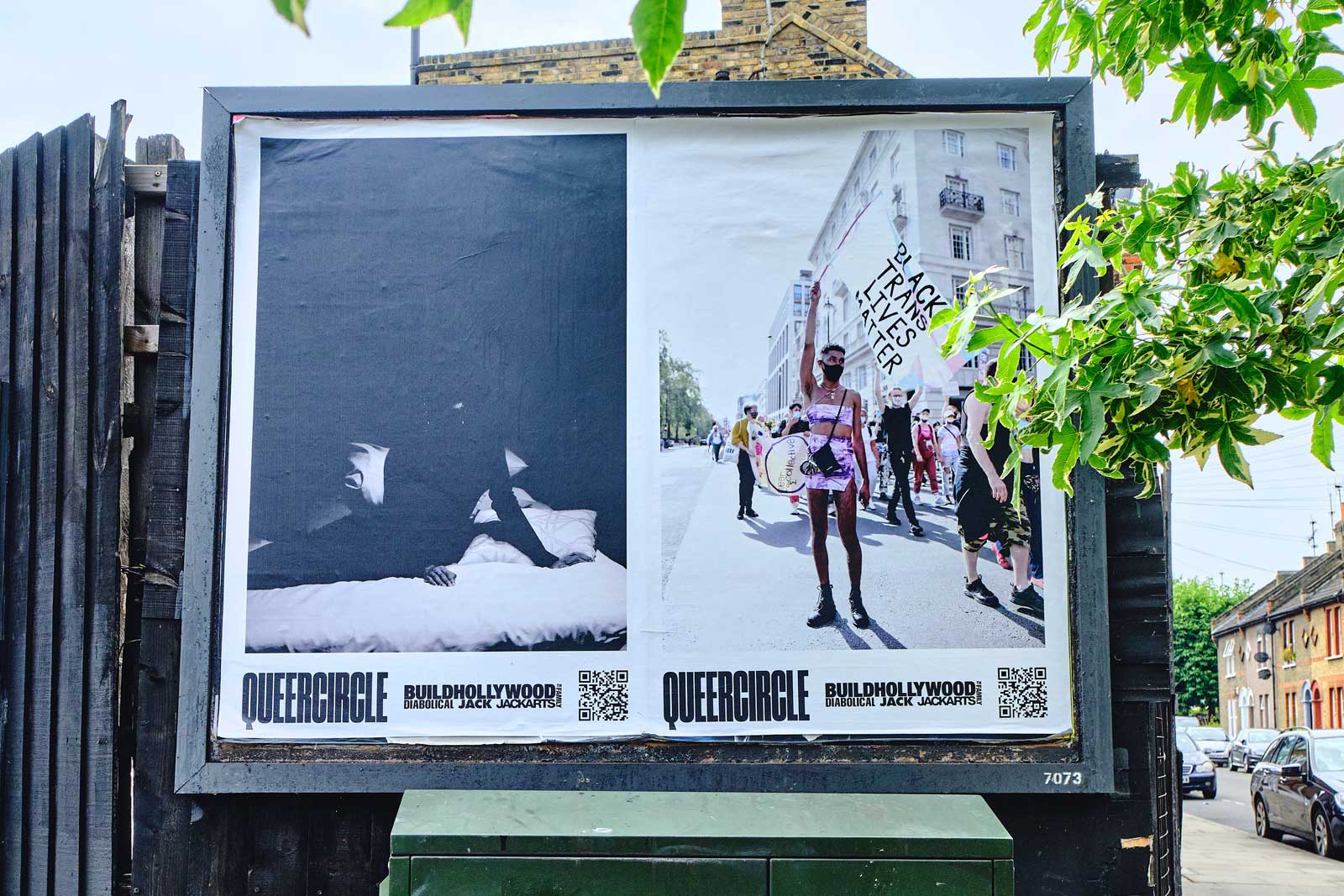 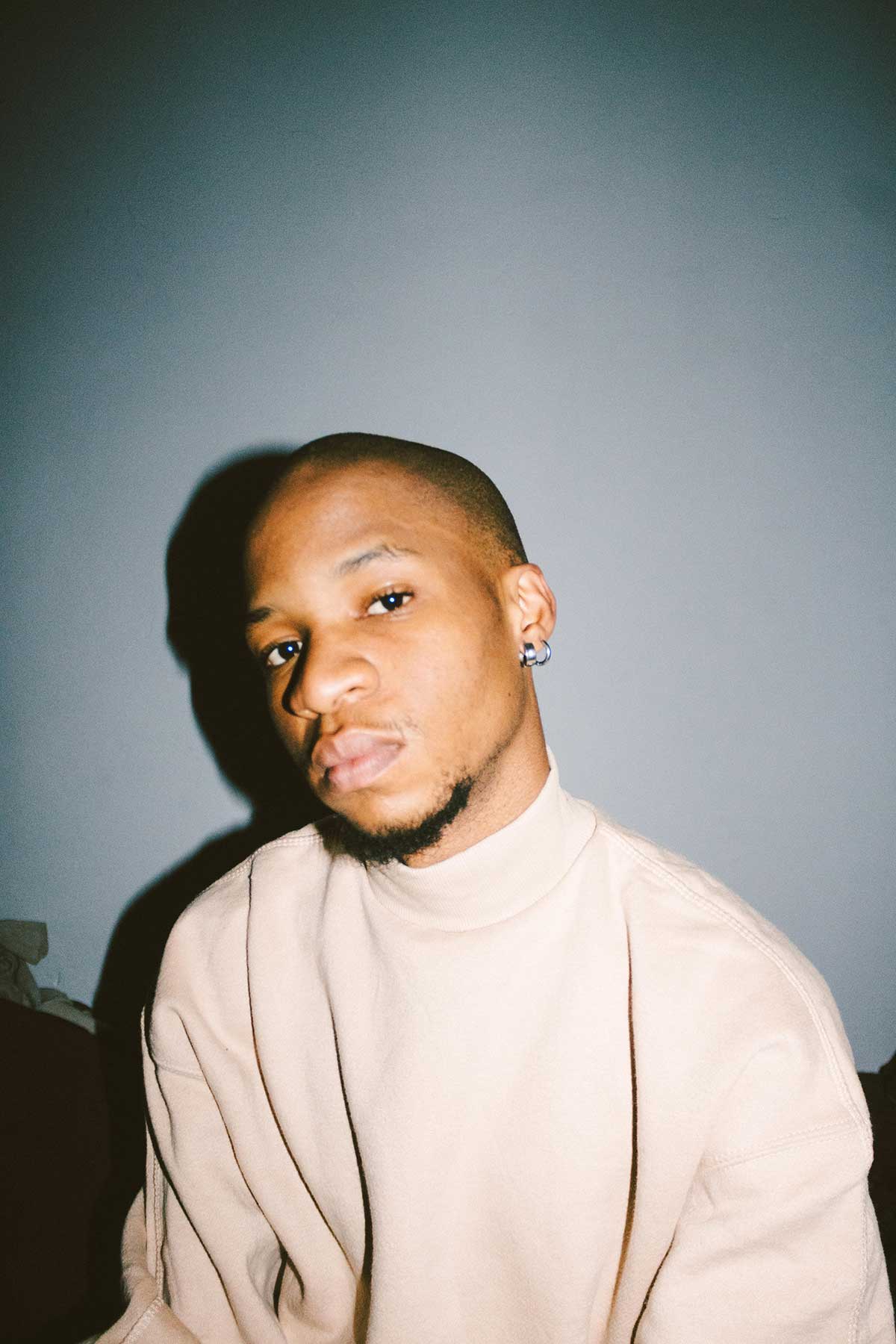 Kgotlelelo Bradley Sekiti’s work is Mmele (the body), a self-portrait in monochrome tones. Of the work, he says, “The work allows any queer body to find themselves in it and the story has allowed me to become a vessel of expression not only for myself but other bodies that find relation to the work… The work interrogates how queer bodies have constantly faced having to water down themselves because society doesn’t allow them to just simply be. I am a black queer body that has been struggling throughout my life to find spaces where I can simply be and the work has allowed me to create a world where I can endlessly express myself”.

In South Africa, violence against the LGBTQ+ community is an ever-present and increasing problem, so Sekiti is advocating for solidarity through his work, linking to a petition calling for an end to the brutality. Though equality for all citizens is enshrined in the South African constitution, the material lives of LGBTQ+ people in the country don’t reflect their legal rights. Sekiti is motivated to empower and support his community through his work and to help to bring about change. We spoke to him about his art, his hopes for the changes it could inspire on the streets, and found out what the Bell Hooks quote at the centre of the call out means to him. 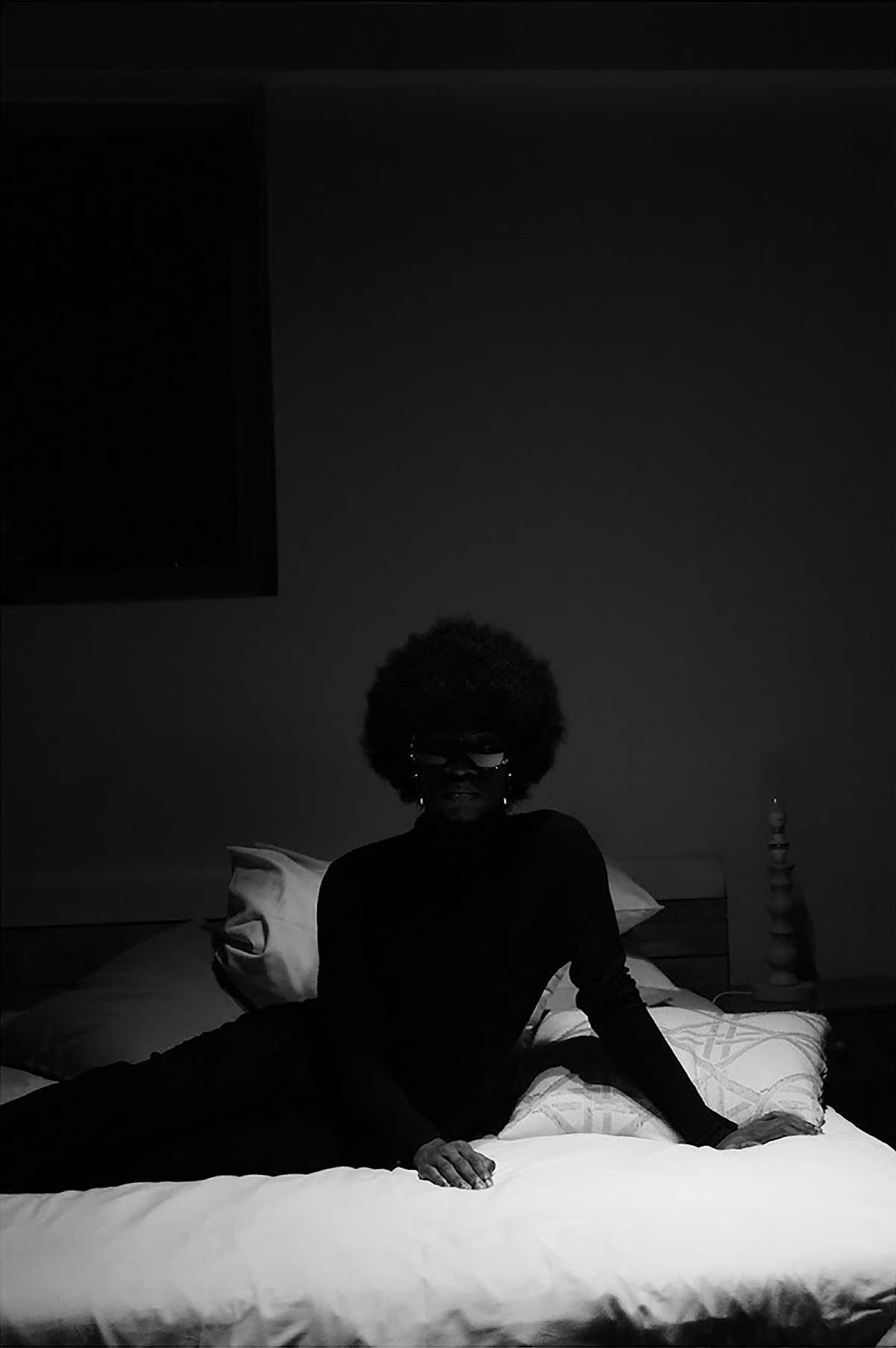 What inspires me is my general everyday experiences as my work is directly a reflection of my life. I am also inspired by other queer artists and activists such as Marlon Riggs whose work is so intentional in the message it relays about queer injustices and discourse of the Black body.

Pride to me means being unapologetically visible as a body and being able to show up and fully be yourself. It means taking pride in the strides you take for you to be recognised and heard. 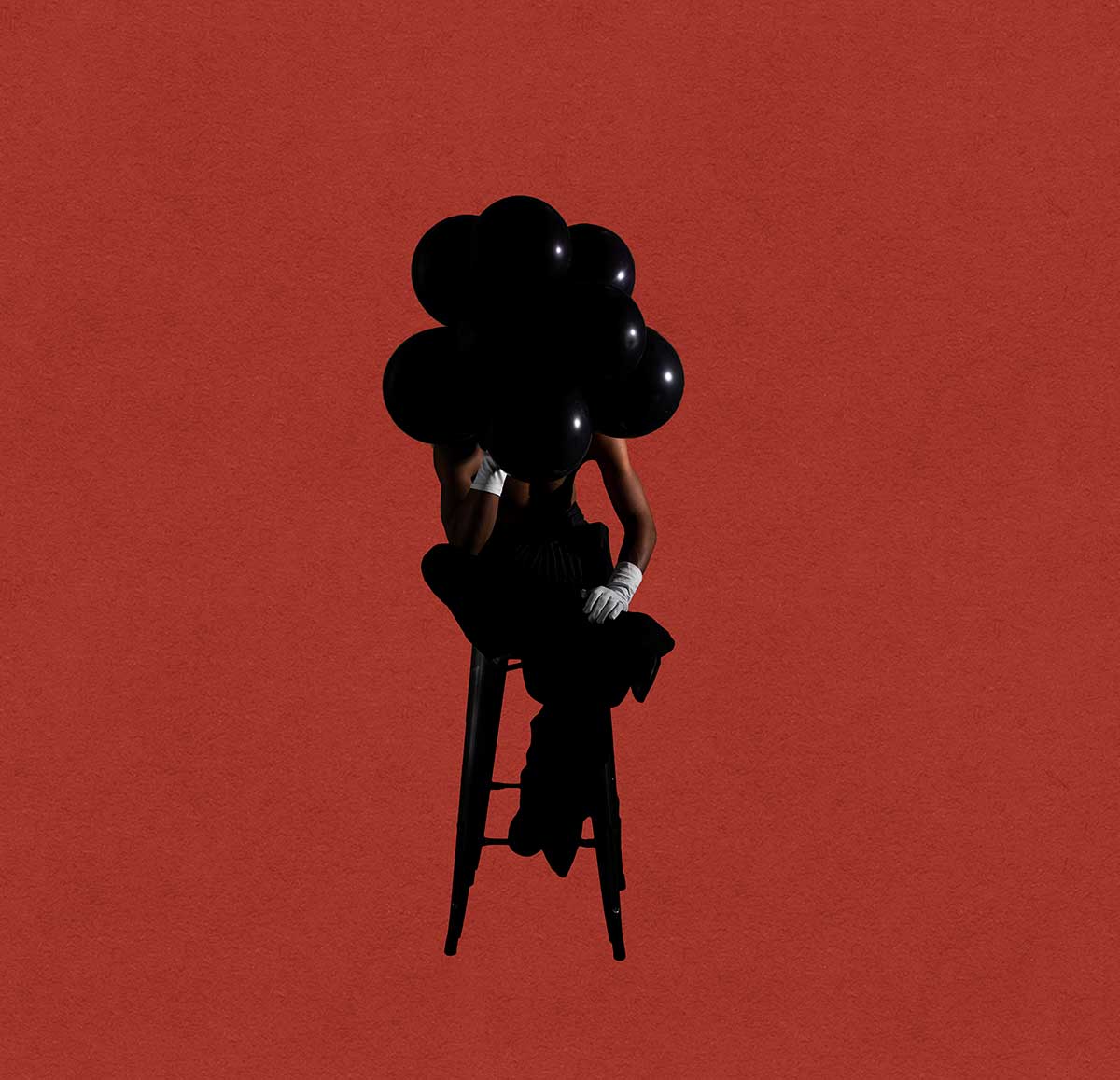 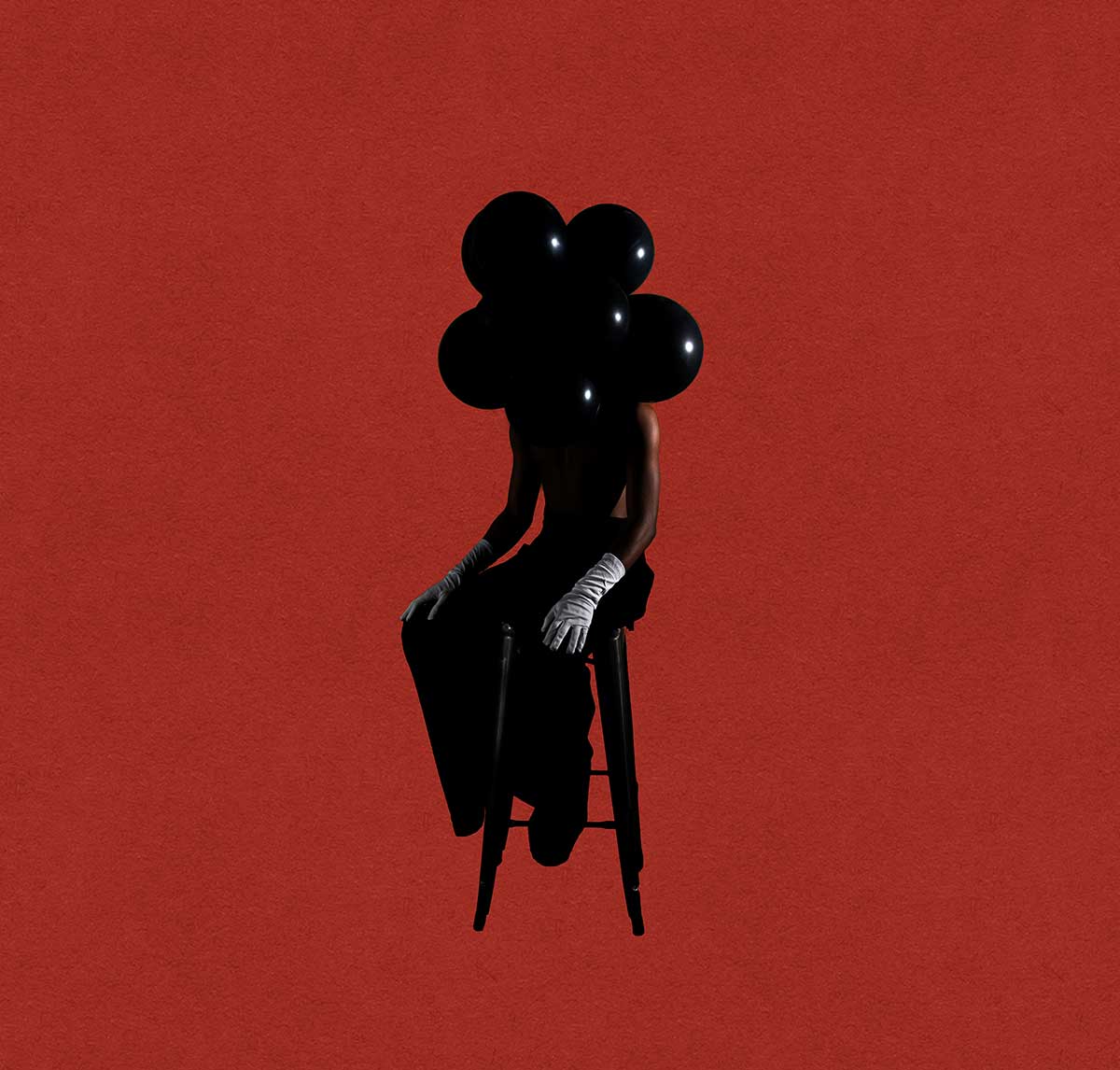 What does the Bell Hooks quote mean to you? How have you translated this into your work?

The quote “There can be no love without justice” to me serves as a reflection on the impact that injustices leave behind into people’s lives and deprive the opportunity to see and experience what is the most essential thing in life which is love. Pain comes with resentment and people that suffer the aftermaths of injustice carry that in most cases. My interpretation of the quote in my work is an encouragement moving away from the pain caused by injustice and rather working towards a world that makes an effort to eradicate that and advocate for love and rehabilitation.

I want people to be able to see how lonely it can get for black queer bodies. We are often restricted from fully being ourselves out in public and only get the opportunity to do so in our sacred spaces. More so I also want people to take away how it takes so much strength to still demand to be seen and heard as a body at the risk of possibly losing your life. 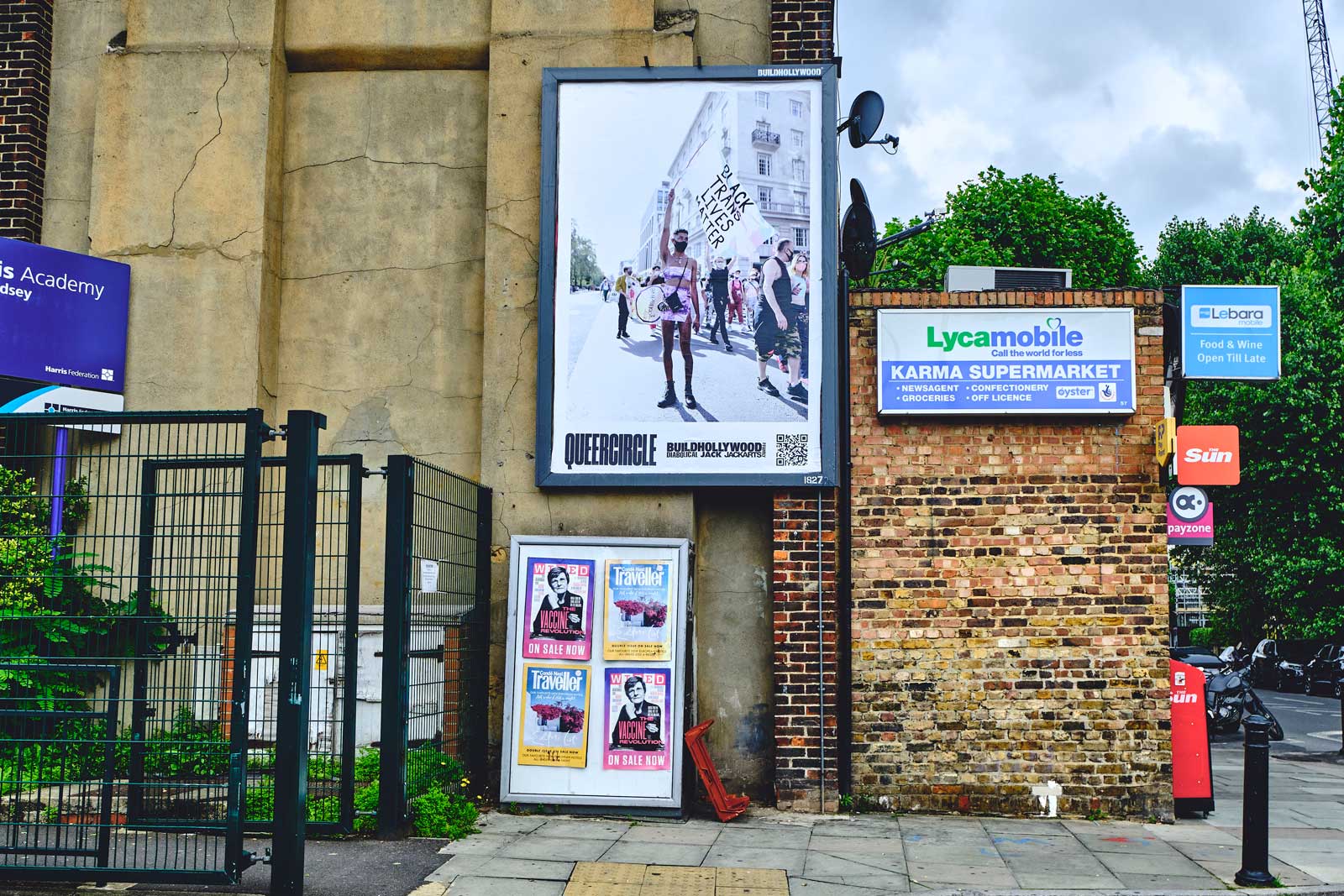 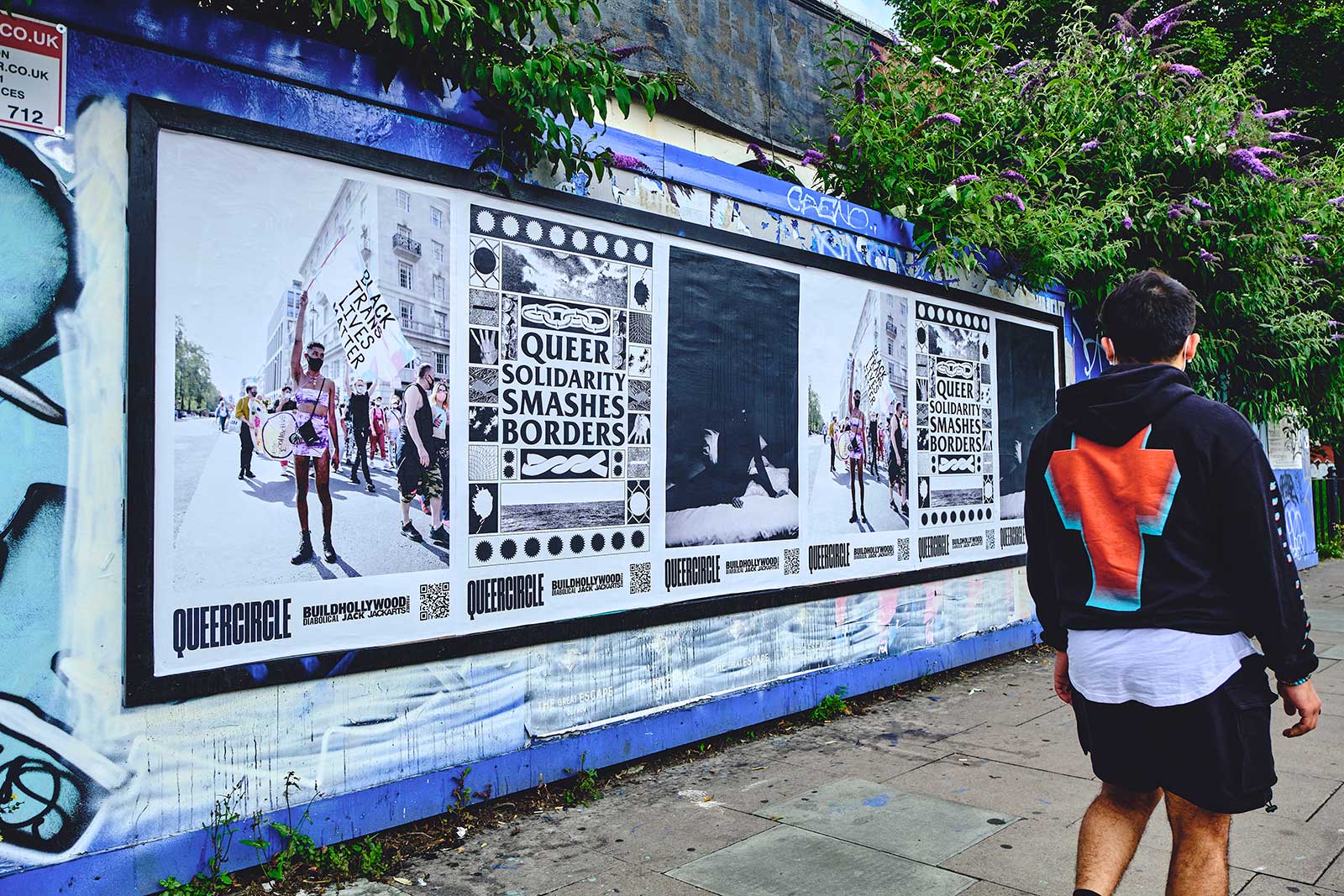 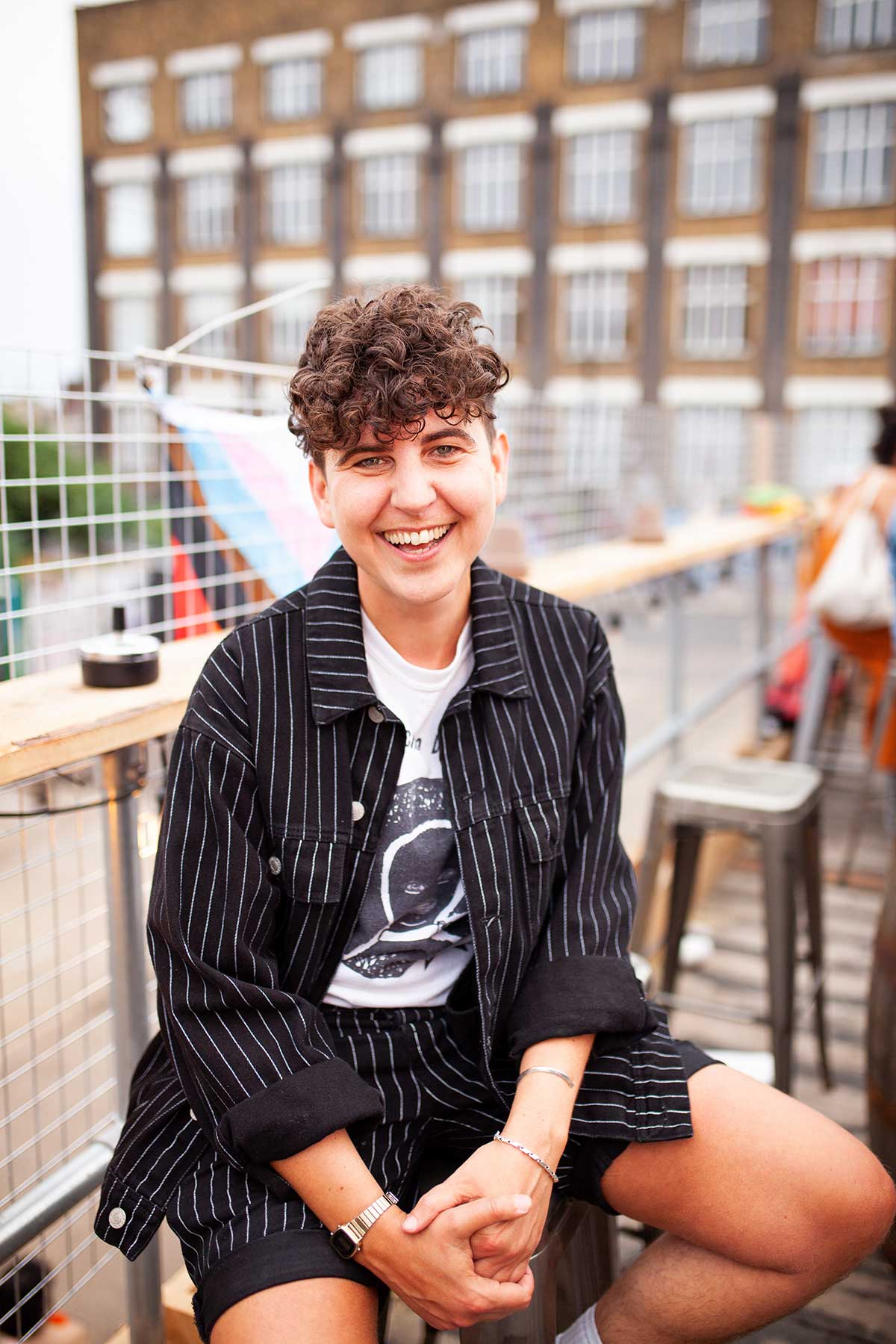 Bex Wade’s piece chosen for the project is Black Trans Lives Matter, a photograph taken at the 2020 Trans+ Pride protest in London. Working as a documentary photographer, Bex has a knack for capturing poignant images of solidarity movements. Using their own lived experiences of an urgency to protest for equality, they are able to communicate exactly why direct action is important – particularly in the post-pandemic world we are heading towards.

Bex says of their work, “Where isolation from community and impending legislation threatens people’s right to protest, powerful images of people taking to the streets are as imperative as ever. As history shows, protests create change. Similarly, queerness embodies that change… I practically and sincerely hope the billboard campaign raises the profile of the vulnerable and serves as a call to arms… this witnessing is the link that lets us recover and project the queer history that we will eventually become.” Bex has chosen to support the Black Trans Foundation through their work. 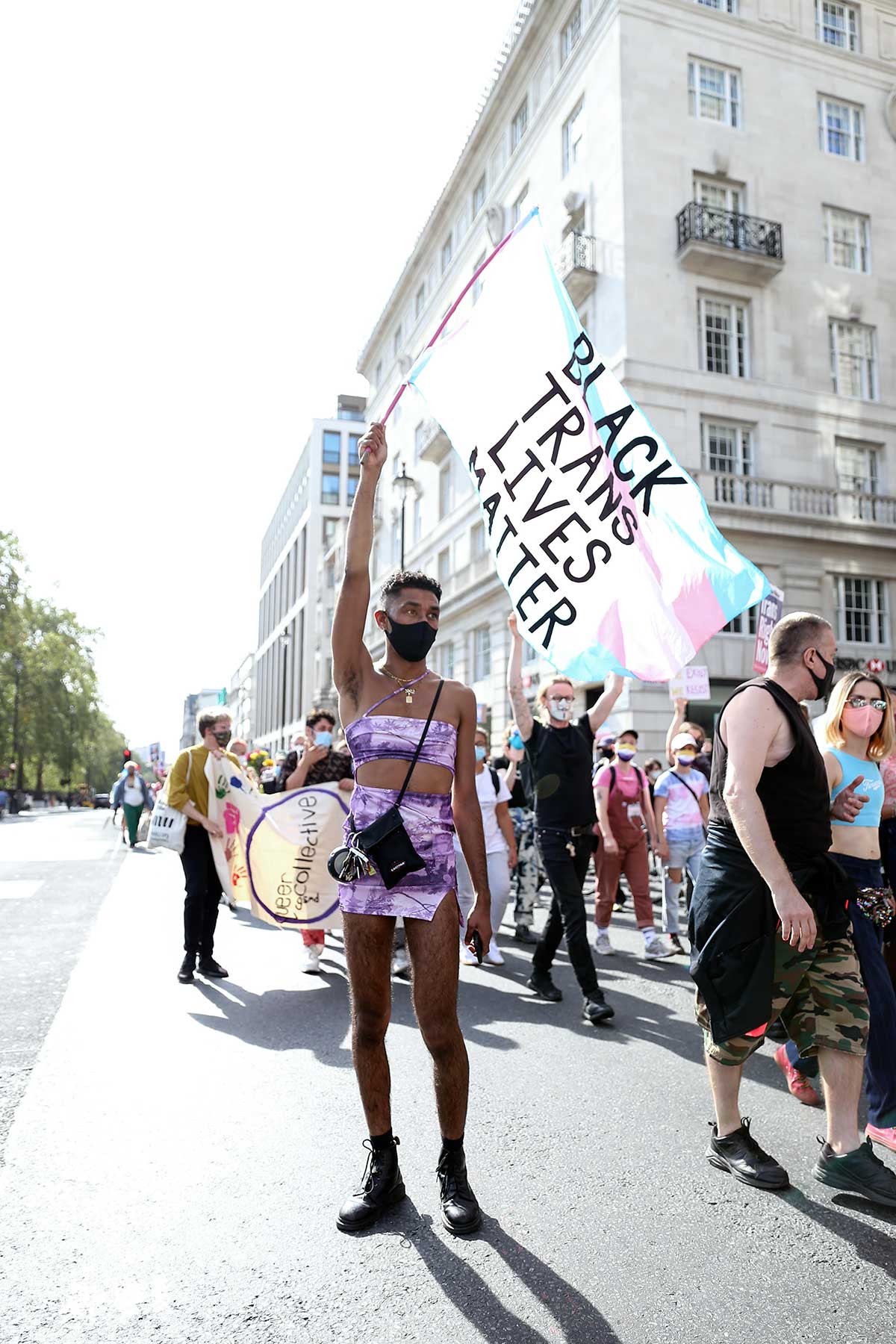 People who stand up and vocalise dissent. Those who can identify the wrongness brought upon them, accepting the damage yet knowing that solidarity is a powerful tool to reconcile their otherness with joy and quality of human life.

The definitive antithesis of, and transgressive remedy to, shame. 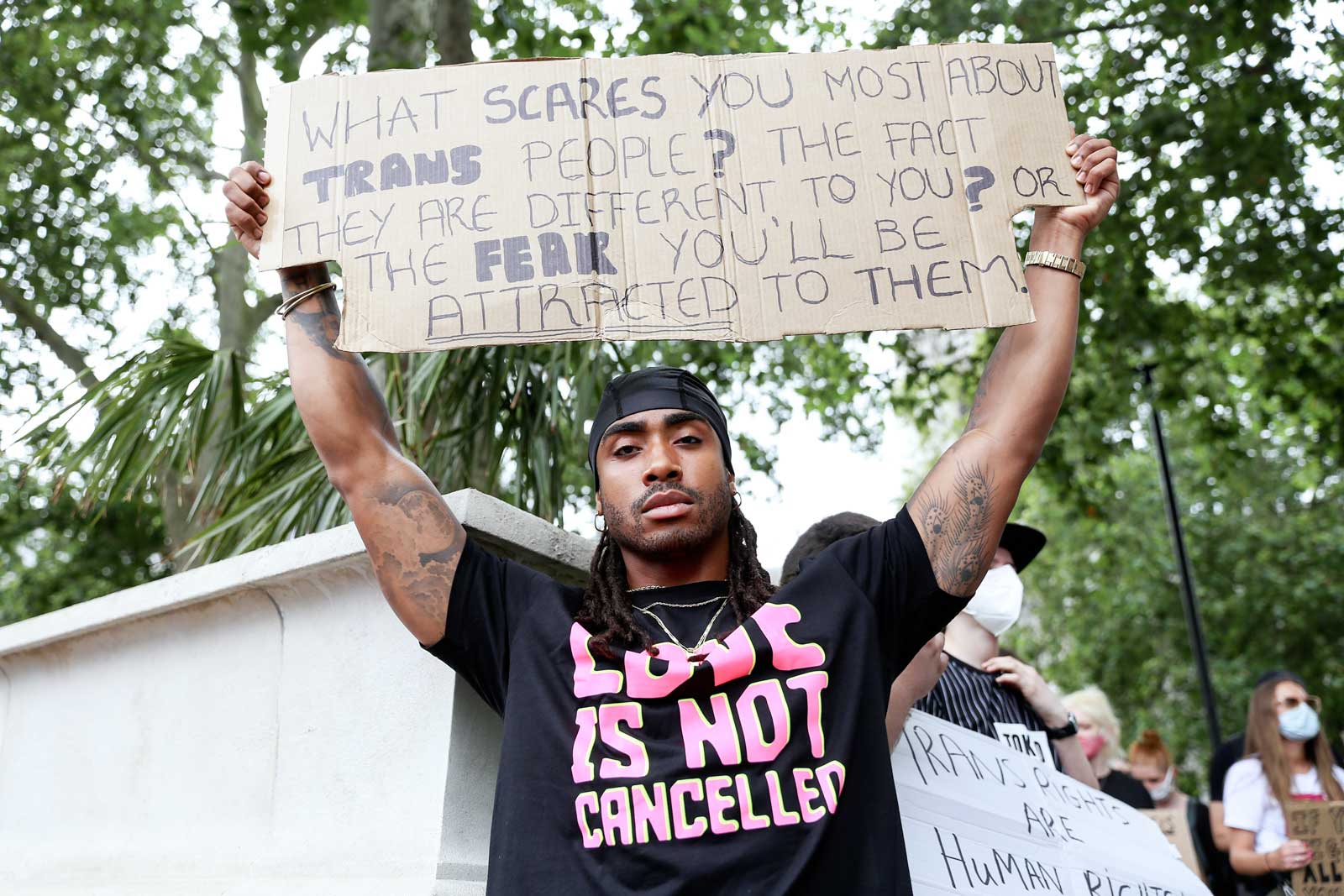 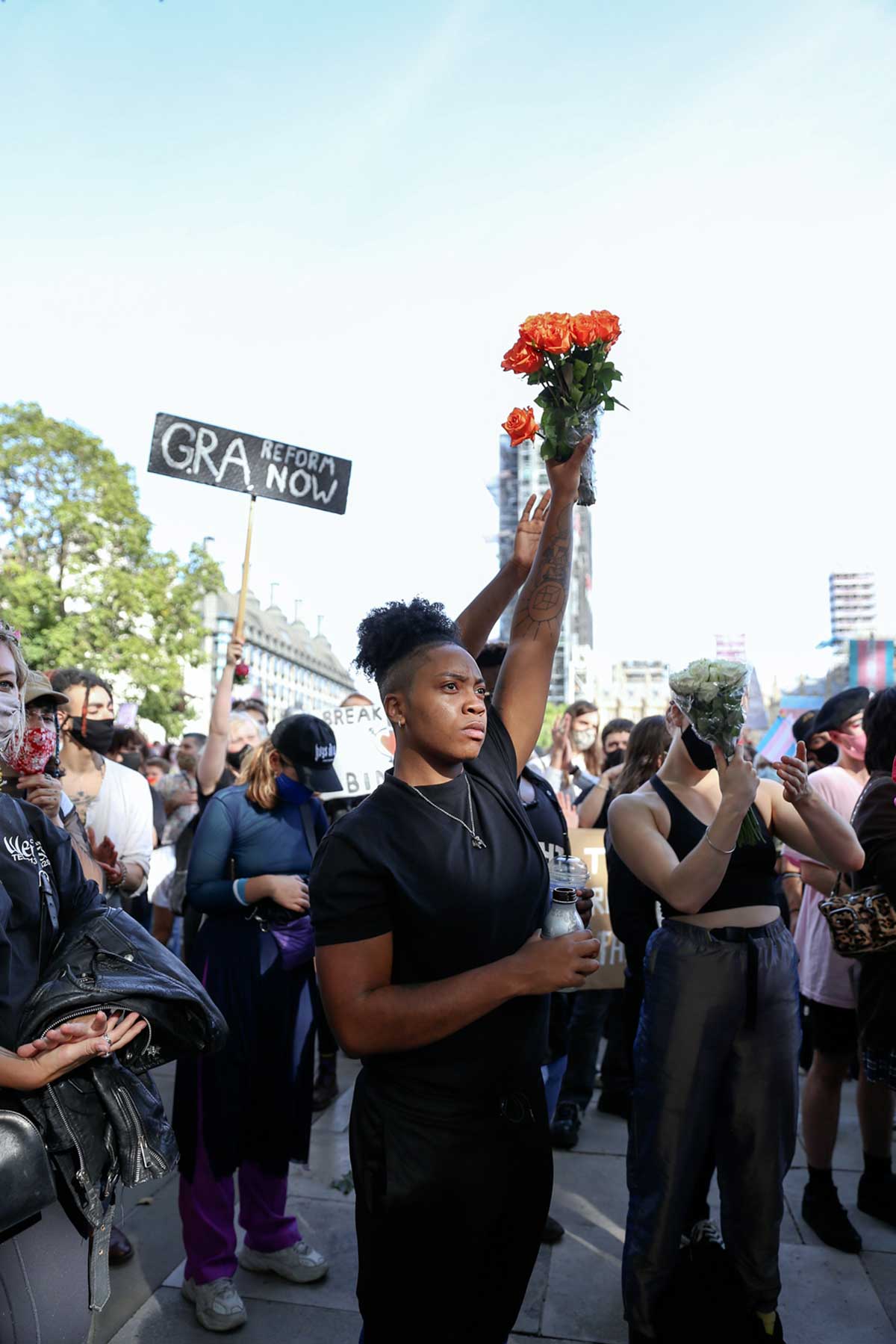 What does the Bell Hooks quote mean to you? How have you translated this into/interpreted this in your work?

Black and brown trans people have led the LGBTQI+ rights movement. Without their technologies of resistance and survival, love would be held within the cultural monopoly of a straight whiteness. When facing consistent injustice and a lowering of dialogue to dehumanising questions of validity; it is not until the experiences of this demographic are centred and accepted, that the concept of love can begin to be explored. There is an urgency for historiographic recognition of this notion, and thus responsibility falls upon those with privilege to manifest visibility as an agent for change.

I want people to be provoked to pause, resonating with the present and the future. For a moment they are being called to bear witness, not only to the power and beauty of the work, but within a context of public upscaling, a large and loud desire for solidarity and allyship. I too was a witness in the street when I created this work, by returning it to a public space at a size that is difficult to ignore I am obtrusively asking for an alliance of observation and introspection. I also want the queer viewer to get something of a kick out of that, because I know I do. 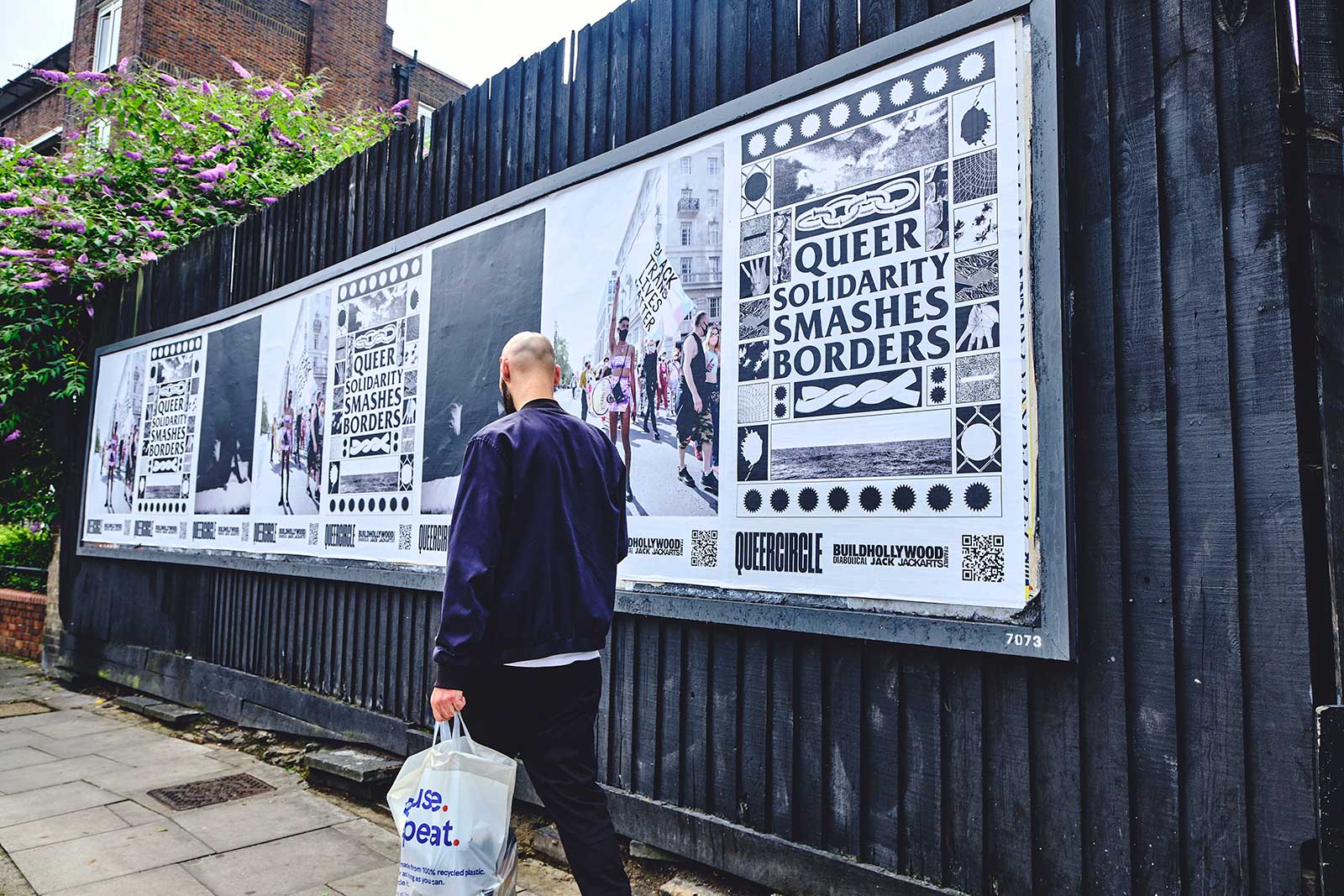 CJ Reay from Black Lodge Press brings his radical and unapologetic approach to the streets through the project, rooted in and inspired by his experiences of the DIY punk scene. With a background in creating zines, Black Lodge Press seemed like a natural progression for his art and politics, with pieces and prints created with abstract textures, archive images and trademark bold text, vocalising political messages of dissent and defiance.

Of his chosen piece, Queer Borders, CJ says, “Borders affect everyone but their implications are particularly severe for queer people; whether it’s gay men escaping state repression in Iran or trans sex workers fleeing violence in Brazil, the border is a further construct which limits human freedom. Solidarity, however, is a powerful tool. Raising awareness, raising funds, supporting asylum appeals, creating art, disrupting immigrations raids are all tangible actions that we can utilise to disrupt the border system and disrupt the hostile environment.” For his call to action, he has chosen to spotlight direct action group Lesbians and Gays Support the Migrants. Pride to me is an act of defiance against normative cultures, and a celebration of the combined histories of marginalised people living by their own rules and not giving in to hate or assimilation.

What does the Bell Hooks quote mean to you? How have you translated this into your work?

Love without justice is meaningless. My work is focussed on the intrinsic rights of asylum seekers and refugees – we can say we love or welcome all refugees, but if we don’t challenge and disrupt the racist systems and structures of the border, or the injustices that take place in detention centres and asylum courts every day in this country, then they’re just empty words.

I hope it makes a bold impression, I hope it challenges people and I hope it reasserts the fact that being queer isn’t just about your sexuality or gender but is actually a wider challenge to all systems of oppression such as racism and xenophobia. 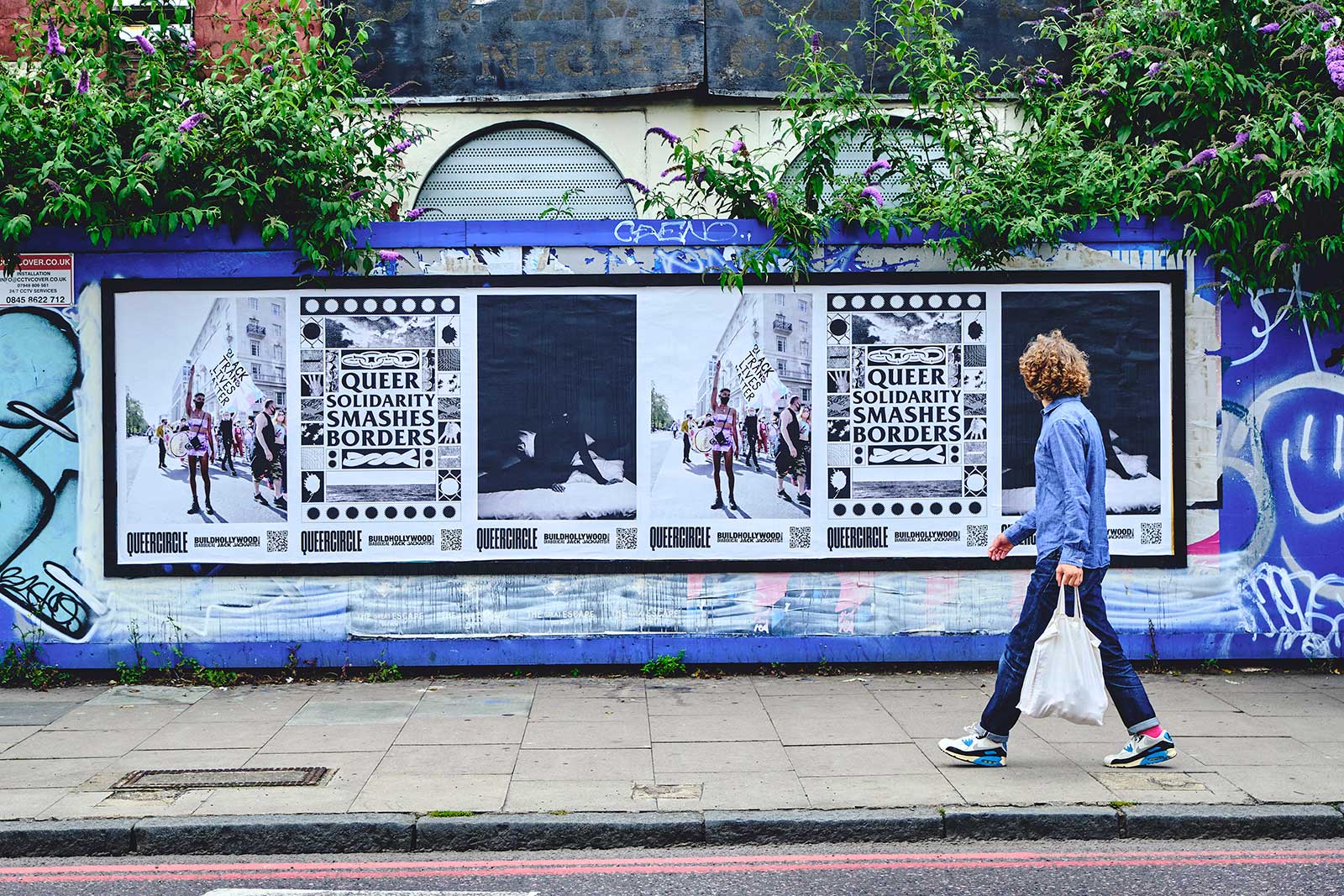 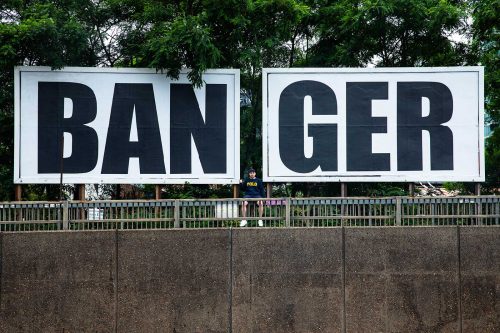 Sports Banger is the anti-establishment, bootlegging artist making fashion, art, and music with a DIY ethos