Pubs, punk rock, and pints: we talk to fashion designer Adam Jones about his romance with the classic British boozer

Pubs, punk rock, and pints: we talk to fashion designer Adam Jones about his romance with the classic British boozer 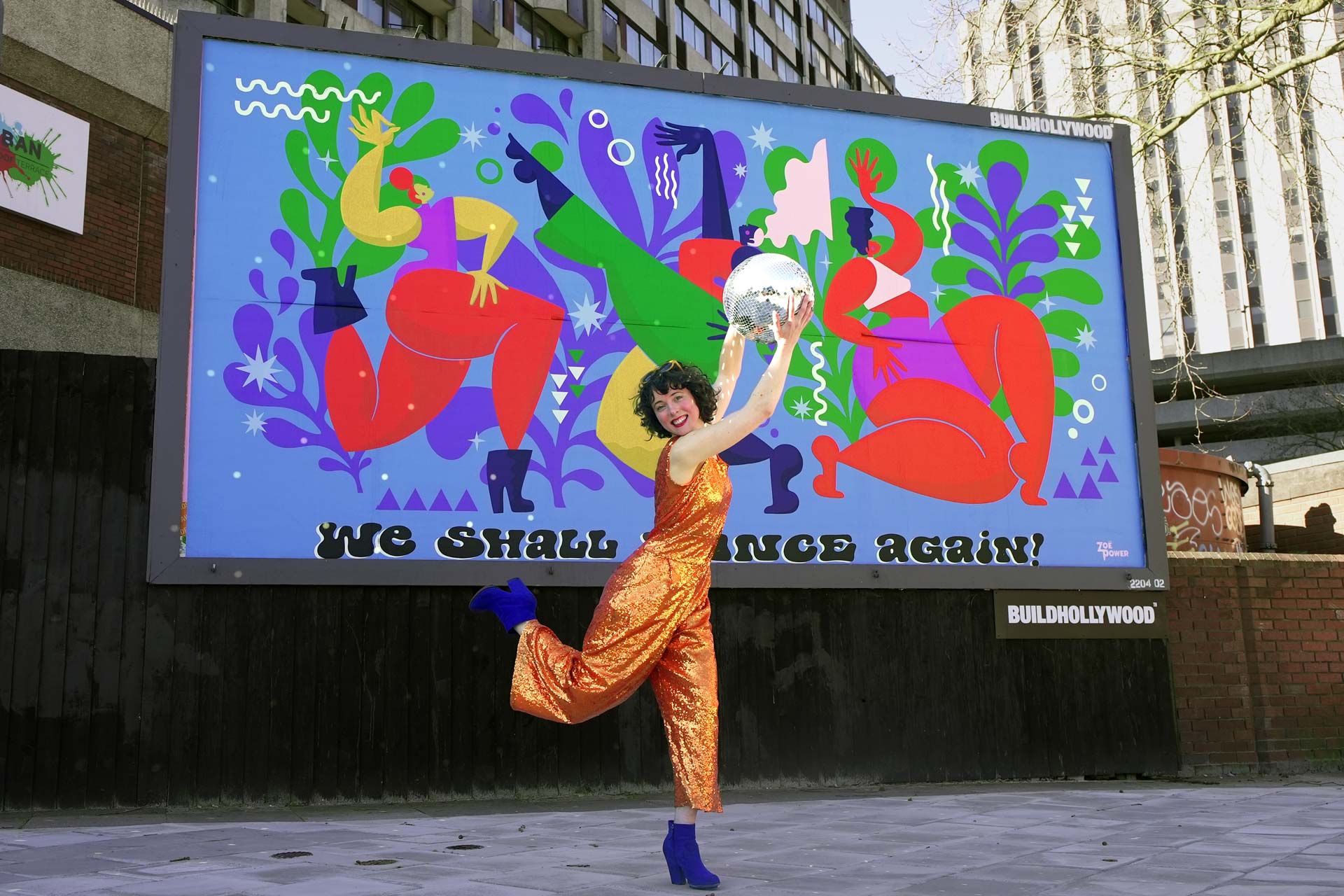 Bristol based artist, illustrator and traditionally trained sign writer Zoë Power creates brilliantly vivid works that seem to breathe energy, warmth and well-being into their surroundings. Her inventive arrangement of boldly simplified, joyously imagined figures and flat abstracted objects conjure thoughts of the French artist Fernand Léger. Power’s compositions are often more closely packed and she doesn’t use black to outline her forms, rather colours are allowed to sing together side by side while her shapes soothe, jostle, mirror and contrast.

One of the artist’s most recent creations is a 20ft high mural titled ‘Nous’ or ‘We’ (2020). It’s a striking, refulgent work made during a year that saw the BLM movement catapulting systemic racism to the fore of public consciousness, furthered the Brexit divide and witnessed an edge of the seat election in the US. Against a straw yellow disc Power’s painting features at its base a pair of crossed legs. This meditative pose dynamically morphs into two figures. They have one arm wrapped around each other’s shoulders. Their other hands are pressed palm to palm, overlapping and rendered in such a way as to mimic an anaglyph 3D effect. While our eyes bobble, the figures’ faces merge, their joined hands pulsing together, communicating ‘solidarity, unity and sisterhood’ as the artist intended.

As her ‘Play Me, I’m Yours’ 2017 painted piano work suggests – part of Luke Jerram’s international project to install pianos in public spaces for passersby to play – Power holds a special place in her heart for music and the performing arts. Nowadays that seems more important than ever. As she says, “For many of us, boogying on a sticky dance floor at a bar, gig or party seems like a distant dream. I want to give a shout-out to performers, musicians and those in the events industry who have faced a particularly challenging year.”

Power’s collaboration with BuildHollywood’s Your Space Or Mine street display project will showcase a new work featuring a splashy trio of colossal dancers. Appearing on poster sites both singly and together they finger click, writhe and high kick ecstatically against plant forms reminiscent of Matisse’s late cut-outs. But there’s a suggestion too that the figures are dancing underwater. Okay one’s wearing boots but hey! They’re getting down like their lives depended on it, throwing shapes and strutting their vitality even while submerged beneath a barely visible weight. So imagine how much more euphoric and spirited their dancing will become if they ever surfaced. Likewise, you can be sure the dancing will be wild and free when we finally emerge from the gloomy depths of this pandemic. In the meantime Bristol’s streets are in for another treat. 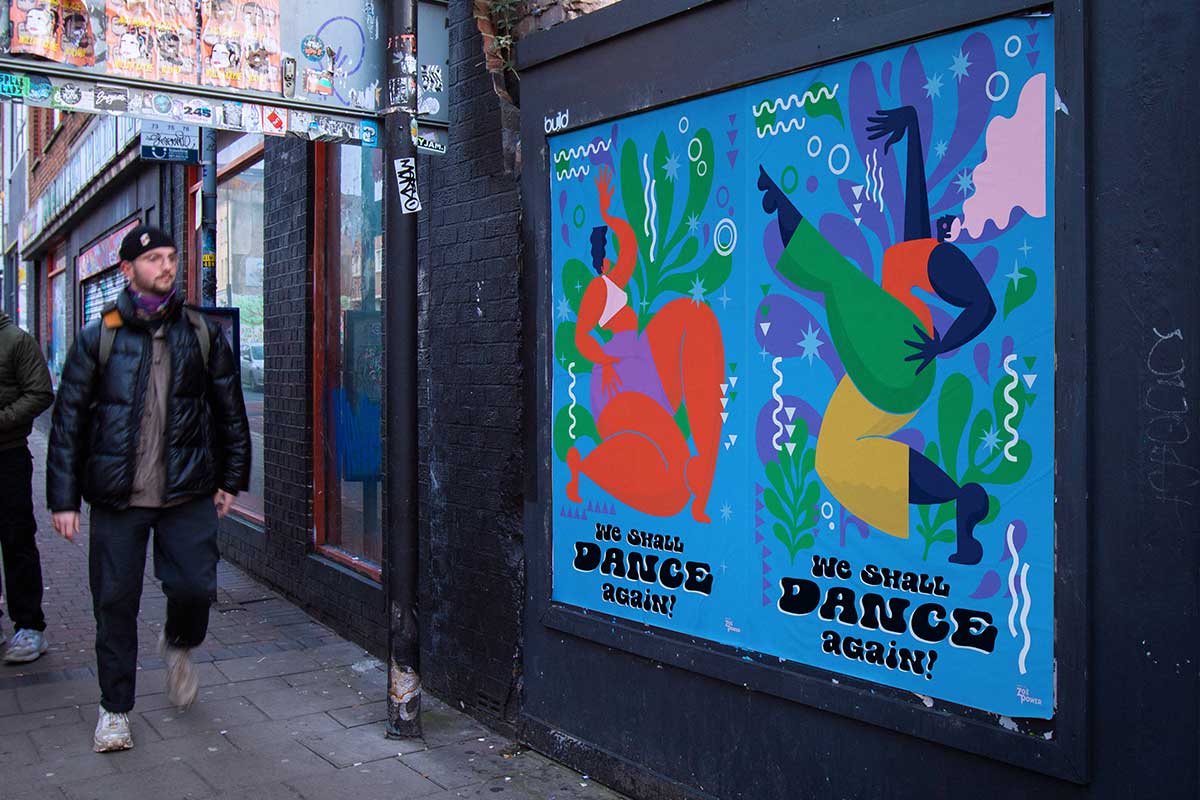 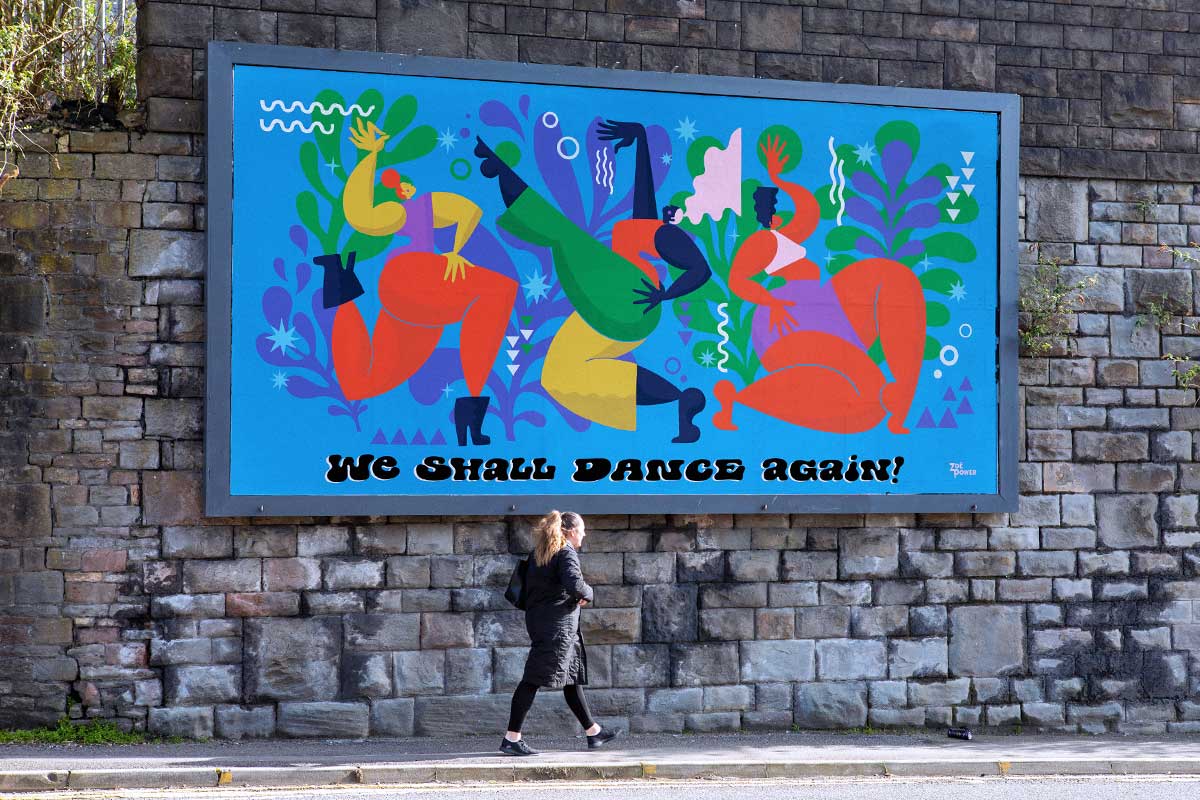 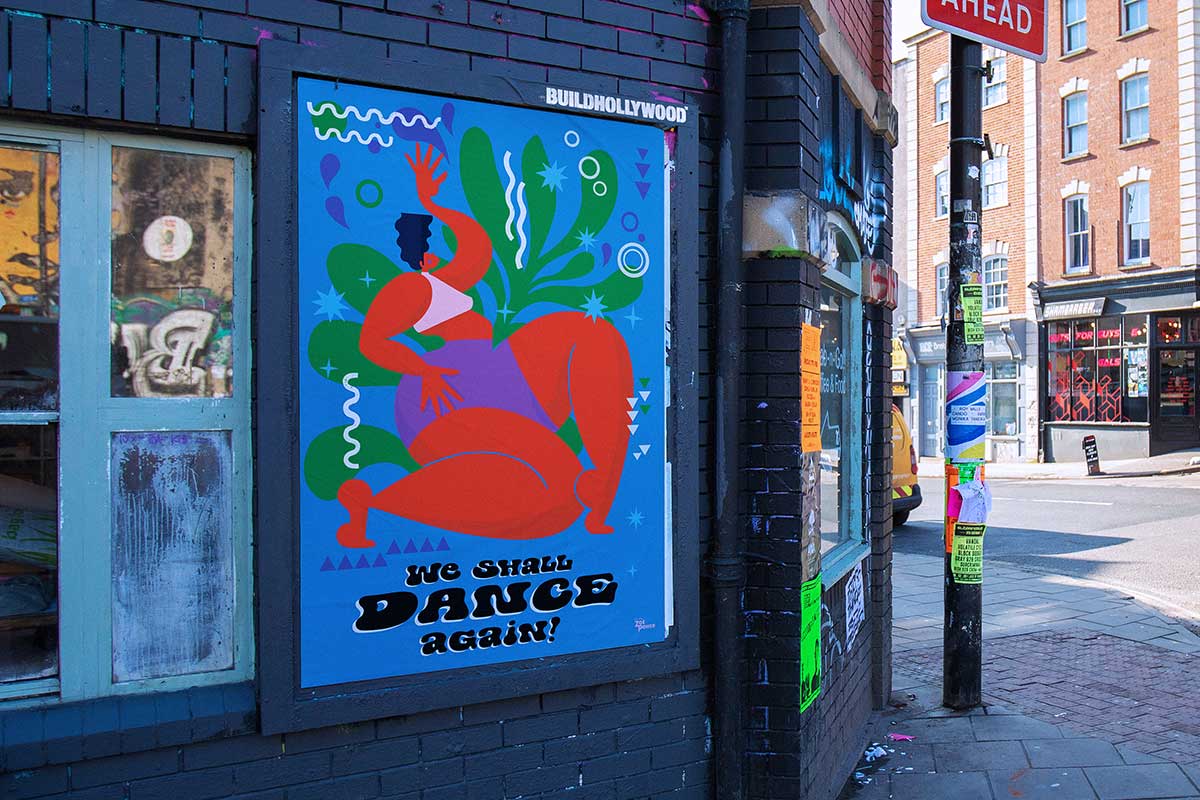 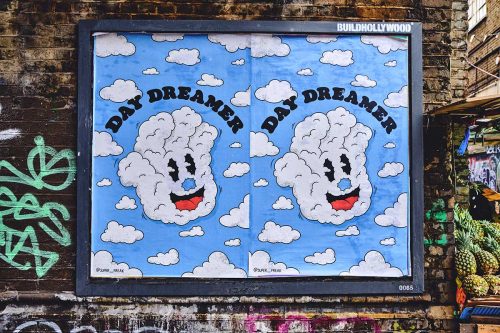 Super Freak and the importance of dreaming 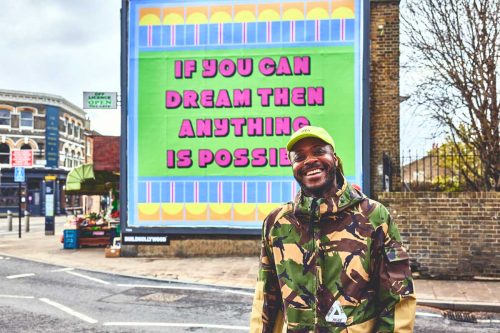